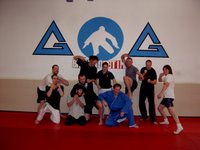 I first started planning this back in December 2005, since which numerous people have said ‘yeah, definitely’, others have got injured, responsibility has been passed around, but it finally all came together this Saturday on the 12th August. Out of all those who said they’d show, it ended up as just the eleven of us: me, Paddy, Jawdy, Nate, Vikki (faith_departed), Riggs, Joe (PsychoMongoose), WCJudoGuy (plus guest), Jawdy’s girlfriend Helen (she didn’t get involved in the sparring, but looking forward to her videos!) and Paul (P A Smith).

As seems to be the way with internet meet-ups for sparring, there was a lot of chatting. This was absolutely fine by me, as one of the main reasons I enjoy going to these things is to meet the people behind the words on a screen; hence why going drinking afterwards is always essential! 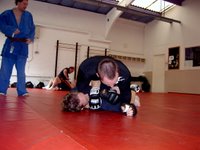 However, there was also plenty of sparring. Joe and Jawdy were particularly intense (Jawdy later going with Nate for a full 20 minutes), but I was happy to sit back and focus on taking pictures. I rolled four times (twice with Paul, once with Riggs and once with Nate) and did stand-up twice (light contact with Vikki, heavier contact with Paul, though he was going easy on me – I would have taken a serious pasting otherwise!), which was quite enough for me. I was pleased that my shoulder held up ok, though it had twinged slightly when I tried to warm up with a few press-ups earlier.

My grappling remains poor, but I was happy to get a reversal, even if the other guy soon managed to get back on top. At some point I’ll hopefully move beyond just clinging on in guard until I get passed/mounted/submitted, but I doubt it will happen any time soon – once I do get down to Gracie Barra (at least I know where it is now), it will most likely only be once a week. Still, better than nothing.

I'm the one with sideburns in the below video. After armbarring me, Paul went through some tips, most useful of which was a simple way to escape knee on belly (as you can see when we roll, I've got no idea how to get out of the position). He said I should place both hands on the knee, push, and move out to the side: you see him getting ready to demonstrate at the end of the vid. The other guy getting armbarred is PsychoMongoose - he's rolling with WCJudoGuy, who at the time was a judo brown belt and amateur MMA fighter.

A few of us went out for drinks afterwards at All Bar One in Birmingham,

which was cool, but unfortunately I didn’t get to stay that long. Of course, might have helped if I had some idea of where the hell I was going; despite having lived in Birmingham for about 2 years now, I managed to be no help whatsoever in finding where we were supposed to go or directing the taxi. Of course, I’m also capable of getting lost in an almost straight corridor, so that’s not entirely surprising…

Looking forward to the next throwdown, which hopefully won’t take quite so long to organise; should be , or again.