Not quite as many turned up as in Birmingham, but we still ended up with seven. In terms of Bullshido regulars, there was me (slideyfoot), Mungkorn Dam, RunningDog, Liffguard and Tcell. A friend of mine I first met about 3 years ago on the now defunct Tung-Fu also came along. He has posted on Bullshido as Jinksy, but only briefly. One of the blues from RunningDog’s club, Sam, also came along, though he left early.

Found out as I arrived that the place had been double-booked with some aikido people, which meant we only had it until 17:00 rather than 18:00, which was a shame. Still, I managed to cover just about everything I wanted in those three hours. While Marcio bumped up the cost by a tenner each, he was extremely handy to have there to ask questions. Otherwise, I would probably have ended up drilling the technique wrong, or at least not as effectively as possible. Website for his class can be found here.

After we all did a quick warm-up, I worked passes and sweeps from closed guard with Tcell. He gave me a bunch of useful tips, such as supporting myself with a bent leg rather than sprawling to resist sweep attempts and being careful not to lean too much forward or too much back. Both Tcell and the next guy I worked with, Sam, said that I was basically doing the right thing. So, now I just need the experience to see openings and perform the passes and sweeps quicker.

After taking a bunch of photos (annoyingly, the camera I had with me ran out of battery ridiculously quickly), I got down to my main drilling with Jinksy. As he didn’t have a gi, I took off my jacket and belt so I just had my t-shirt and gi trousers, meaning that I’d need a pass and sweep that worked without the gi. Only one I know is the tailbone pass (no idea what the proper name is), which Felipe had showed Mungkorn and me in class a while back. Marcio went over it again in greater detail.

Person A starts by putting their hands on Person B’s pelvis, working back up the legs. Shoving their right knee into Person B’s tailbone and pushing down with the hands to keep Person B there, Person A then attempts to push back with their arms and left knee (which I think you put to the side rather than backwards like I was doing previously), digging their elbows into Person B’s leg muscles at the same time. As soon as there is space, Person A underhooks both legs with his arms, pushes forward and sprawls round for the pass. Ideally, Person A will also get their knee up in between Person B’s legs for additional security, or break their guard open to pass that way. Main problem I had was simply lacking the strength to easily break Jinksy's guard. So, Marcio’s advice that you just needed to make space rather than necessarily break the guard proved very helpful.

Drilling that for a while with increasing resistance, I then moved on to the flower sweep, which Marcio also helped with. The way he taught it was for Person B to break Person A’s posture by pulling forward with the guard and also dragging down on Person A’s right arm, throwing it over to the right. As quickly as possible, Person B then wraps their left arm round Person A’s head, making sure to trap Person A’s right arm at the same time. If Person A manages to get their left arm into Person B’s neck, Person B needs to push on the elbow and trap that arm as well. Person B then wraps their right arm around the back of Person A’s left knee (aiming to pull it up towards Person B’s right shoulder). Person B put's their right foot up on Person A's hip, pushing off to swivel their own hips round to the left. Taking the right leg off and shoving it into Person A's side, Person B puts their left leg down by Person A's other leg. Finally, Person B pulls on the left knee and pushes with their right leg to get the sweep. If Person A manages to get their right arm free, Person B underhooks it and pulls it close to their own head to stop Person A using it to stop the sweep.

Jinksy and I drilled that to death, although only on one side – must remember to do the other side as well next time I have the chance. Jinksy got Marcio to help him with something different, as he wanted to work the kimura (if I’m using the right term for the arm lock where you figure-four the arm from guard, sitting up and twisting it past Person A’s back), along with the sweep you can do if Person A pulls back. While he was working with Marcio, RunningDog grabbed me for a roll, where I had the dubious pleasure of being shoved forcefully face-first into his crotch before he got me with some kind of shoulder-lock. Well, we were in Brighton, so I guess that’s to be expected...

I then went back to drilling with Jinksy, where I found out that escaping the mount when someone isn’t constantly going for an armbar is considerably more difficult. I wasn’t able to sweep him, though Jinksy advised trying to shrimp my way out, which did eventually work but I seemed to use a lot of energy in the process. Probably just doing it wrong, or my stamina had gone by that point. Also rolled with him at some point, which I think might have been what precipitated the mount escape drills, as I ended up stuck underneath his. 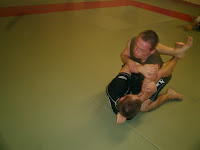 y with ponytail” typifying the class), we headed off to the St. James’ Tavern for drinks. Well, at least Mungkorn and his gf did – Jinksy and I wandered aimlessly for while trying to find his sister’s house so I could dump my stuff. Once we finally got there, showered and then found the pub, Johnny had also arrived – Liffguard unfortunately had to leave earlier, Tcell having gone around 16:00. So that left five of us – shame I couldn’t get any pics.

I reckon I can legitimately put today down as 1.5hrs of BJJ in my geektastic Excel sheet: proved useful, and Marcio was well worth the fee, not to mention it’s always good to see people off the forum. Even better to get drunk with them!
slideyfoot at 16:32
Share