I won’t write much about Barbados, as that part of the holiday was rather spoiled by some bastard snatching my girlfriend’s bag (also meant we lost our photos, so had to buy a crappy single-use camera for Dominica. Hence why the pics aren't great quality). However, I would recommend two places.

Firstly, the gorgeous Andromeda Gardens in Bathsheba on the East Coast. To get there, take a bus from the main terminal in Bridgetown (though be prepared for a long wait). Secondly, the walk along the West Coast from Speightstown down towards Holetown is great – the beaches continue on for a considerable distance before you can’t go any further.

We felt much better in Dominica, thanks in part to two people: the grandmotherly Ma Bass, who runs the Ma Bass Guesthouse in Roseau, and a dependable taxi driver, Frank. You can reach Frank on 2358307: judging by my experience, he’ll give you a fair price and reliable service. Roaming with F-Orange, I found I didn’t need to enter the country code – other local networks didn’t seem to work so well. Of course, failing that, there’s always pay phones. It was comforting to encounter two trustworthy people after the bad experience that morning back in Barbados.

In Roseau, there wasn’t a huge amount to see, but I can suggest a walk round the Botanic Garden, then on Friday the happy hour at the Fort Young Hotel. That goes from 18:00-20:00, upstairs in the Bellas Bar. Rum punch is a measly EC$3, bought by first getting a voucher from the desk. There is also live music, which when we went was a suitably Caribbean steel drum band.

You’ll need a bus or taxi to reach Laudat – we went with Frank, but you can get a bus at 06:30. At least I think so: if you're staying with Ma Bass, then she knows the times. It's driven by ‘Reds’ (so named due to his pale complexion). From where we stayed in Laudat (the

quite expensive, but good quality, Roxy’s Mountain Lodge), you can walk to Ti Tou Gorge in about thirty minutes. Take the first right after the snack shop, then follow the road all the way past the power station, over the river, eventually reaching a sign saying ‘Ti Tou Gorge’. For some reason, that’s got arrows pointing into the forest, which is the wrong way. Nevertheless, it does at least let you know you’re on the right track. Walk past the sign, and you should reach the gorge shortly afterwards.

The gorge itself has some basic changing rooms and a few steps set into the stone, where you can descend to the gorge entrance. When we went, the water was extremely cold, and it got colder as we swam up. There is an especially dark middle section where you can neither touch nor see the bottom, which is a little disconcerting. However, once you’re past that, there are some rocks poking up out of the water which you can sit on. This most likely depends on rainfall, so I’d imagine that at certain times of year the level will be much higher, meaning less resting points.

The only things to worry about are keeping your camera dry, the temperature and few crabs. I strapped our camera to my hat and took all our clothes with us, wrapped in plastic, but then I was paranoid after getting robbed earlier in the holiday. It's probably fine to leave you clothes in the rocks by the entrance. Probably best to get some kind of sealable bag for your camera.

Our next film site was considerably less photogenic. After Laudat, we headed to Soufrierre, taking a bus from Roseau. The Pelegosto cannibal village in Pirates of the Caribbean II was filmed at nearby High Meadow, but none of the locals seem familiar with that name. Instead, ask a bus driver to take you up to the Pirates filming site on the hill, or alternately drive towards Roseau for about five minutes, until you see a concrete path winding up into the undergrowth. It is possible to walk, if you're feeling especially tight on cash (though the bus is pretty inexpensive). 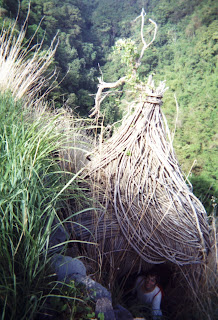 Climbing that path will take you to the very overgrown film site. It takes a fair bit of thrashing through bamboo, long grass and nettles, but you’ll eventually come across the battered remnants of the village. That consists of four huts and a few stone walls – there is also a fifth hut back down by the main road, flipped on its head. Most of them have been reduced to a metal frame, but there are still two in good condition (one of which is the one by the road). Worth noting that the hut up on the hill is literally hanging off a slope, held in place by cables, so presuming its still there in the coming years, be careful climbing down. There is a wall with plenty of handholds next to the well preserved hut: I hate heights and I managed it, so not too difficult.

Our last day in Dominica would provide a further two sites from Dead Man’s Chest. Once again, we relied on Frank to take us round, and as always he did an excellent job. We arrived in Calibishie the night before, bizarrely staying in a room provided by the mother of the local bus driver. In the morning, Frank took us to the Indian River. That’s the place where Tia Dalma lives in a hut, seen from the air and then a little way downriver, before the main scene is filmed in a studio. Like so many other places in Dominica, you need an ‘eco-ticket’ to get in: a site pass (you can also get day and week passes) costs EC$5.30, effectively acting as a sort of tourist tax set by the government. Annoying, but not exactly expensive.

The tour itself cost EC$40 each – our guide, Leo, seemed pretty good. He pointed out flora and 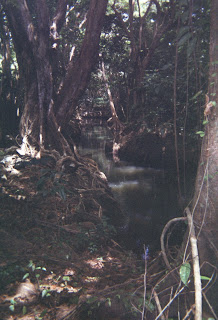 fauna, as well as some local history, keeping up a constant commentary on the way out (though rather quiet on the way back). The boat stops at a small touristy bit (there are a few people offering various things to buy, next to a couple of huts), where you can have a drink and the chance to go for a walk. Once you’re done, let your guide know and they’ll take you back the way you came.

Finally, Frank took us to Hampstead Beach, which is where the Black Pearl is beached in Pirates of the Caribbean 2, and also the beach Jack Sparrow runs along to escape the tribe. I think it also crops up in Pirates of the Caribbean 3: At World’s End, where there is a sea monster rather than a ship lying in front of the palm trees. In the same area, you can probably find where Will was captured by the cannibals – we didn’t look too hard, as we were told by Carol (a pleasant English lady we met the night before) that there was a danger of quicksand around there. Similarly, the forest through which the mill wheel crashes was also filmed on that beach.

We’d not been able to find the beach on our own, ending up at Batibou Beach the day before (which is stunning: well worth a visit if you’ve got the time). To reach Hampstead Beach, you walk (or much easier, take a bus or taxi) from Calibishie towards Portsmouth, then go down the first trail leading off from the main road. There are two concrete blocks so cars can cross a small gutter, but you’ll need a pretty rugged vehicle to make it over the terrain. If you reach a bridge saying ‘Hampstead River’, you’ve gone too far – walk back to find the trail.

I'm not sure we'll ever make it back to Barbados, as unfortunately that now has bad associations. However, Dominica was lovely, so I'd definitely like to return some day, perhaps taking in somewhere like St Lucia en route.
slideyfoot at 10:25
Share