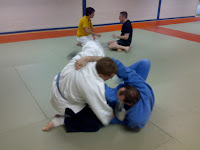 I wasn't around for the first Oxford TD, which I think was some time back in 2005, but have been a regular throwdown attendee since 2006. Cullion organised this one at the Oxford Brookes Centre for Sports, where there's a room available for £45.

It wasn't an especially long journey for me, as I'm only coming down from Birmingham, slightly over an hour away on the train. Bran Lydster, on the other hand, was heading from Doncaster, which is considerably further: nevertheless, bumped into him as the train taking me from Brum also happened to be his final connection. Then again, unsurprising, given that three of us from Bullshido had been planning to arrive about the same time. I had initially seen a person on the platform weighed down with a complicated array of pads, gis and belts hanging off him, which turned out to be Bran. In my case, the Eddie Bravo book I was flicking through coupled with oversized sideburns gave me away. ;)

That third person who had arranged to meet at 14:14, Jadon, got there slightly earlier than us. Catching a lift with another person from Bullshido, solfish, we made it to the venue a little late (thanks to Oxford traffic lights, which seem to be spaced out every few metres), followed by the problem of finding the place, buried in the depths of campus.

We didn't miss much, as everyone was still introducing themselves by the time we got there. I only recognised WCJudoGuy and his brother: everyone else was new to me (except for my friend Sasha, who arrived a while after), but I unfortunately didn't get the chance to go round and introduce myself properly. In the changing rooms, solfish told me the bad news that the new BJJ club in Oxford (held at the Aviators Health Club on Langford Lane in Kidlington) has already closed, which is a shame. However, somebody else (either Sasha or Cullion) said a different BJJ guy was thinking about starting something at Oxford Brookes, so hopefully that works out.

After a quick warm-up, Sasha and I went to do some drilling (in the first part of Bran's video below, thats all I'm doing, moving on to side control escapes: Sasha is in the black trousers), joined later by Madgrenade, who hadn't grappled before. WCJudoGuy popped over to offer his advice, and then Bran stepped in. I already knew he was experienced from his profile on Bullshido, but I didn't realise just how much he knew about the ground: he's got a blue, but that's buttressed by years of groundwork in styles like judo, wrestling and Japanese JJ (from the conversations we had, its very clear that isn't your typical JJJ).

WCJudoGuy had been eyeing up my blue belt, which made me feel distinctly conspicuous, but I diverted him to the far greater challenge of Bran. Instead, I had a roll with Sasha. Previously when we've sparred, he's been fairly dominant: this time, we were even. I kept trying to isolate one of his arms so I could go for the kimura, but he was able to stop that from leaving my hip. In his guard, I found myself defending in a relatively relaxed fashion, returning my hands to his hips if he tried to pull me off balance, and defending my neck. Eventually passing to his half-guard, I tried to get my knee into his armpit and then pull up on his elbow to set-up a kimura (as per instruction last class), but think that just put me back into guard. I'd set my phone for about five minutes, and it went off not long after that. You can just about see us rolling in the far back (Sasha has black trousers with gi, whereas I'm all in white) in the two vids below. Lots of other people sparring too, as you'll see:

My next roll was with Jadon, who looked about my size (asking later, turns out he's got about 15lbs on me). He has four years of judo from his youth, and more recently a few months of BJJ under RGA brown belt Andy Roberts. Jadon stayed aggressive throughout the roll, mostly going for chokes. I was able to hold him in my guard for a while, or return him to half-guard when he managed to pass (which happened several times, going through a cycle of guard, side control, back to half-guard). I also got to his back about three times, but wasn't able to sink the choke: instead, I just had the one hand looped round gripping his collar. I was in perfect position, even getting him completely straightened out, so need to work on applying the RNC.

I got my favoured sit-up sweep, but kept failing with multiple armbar attempts. Eventually, I sunk one in – Jadon was keen to try and escape, so held off tapping a little too long. I heard a definite crack, so stopped (or he tapped and I stopped), but his arm seemed to be ok. I'd managed to bust my thumb earlier on, bashing it top-first into his leg while straightened out, so as usual decided to lay off the sparring for the rest of the TD. Again, you can just about see us in the far back: this time, we're both in all-white. You'll hear Jadon yelling, I think (didn't remember him doing that, but would make sense: immediate way to get a quick release!), about 7 minutes in:

I finished off by drilling the sit-up and scissor sweep with Sasha, and finally asking Brian a few questions. He'd shown me a guard pass earlier on, which he went through in greater detail. First you have to open their guard, also maintaining firm control of their hips (pressing on them directly with your hands). As soon as they open their guard, sprawl backwards, keeping as low as possible. Walk round on your toes, still staying low, until you move into side control. Brian also mentioned something he called 'rock climbing', which involved gradually pulling yourself into the position.

There was another technique he showed me from the knees, which this time was basically a single-leg, but from kneeling. IIRC, seeing the knee up you loop your arm under and grip, then drive for the single. I'll have to check on the video later (Brian should be sending it through once he's got it onto his computer), which hopefully captured that bit of teaching. Brian brought a camera and tripod with him, which was set up to record in a corner for the duration: should have got most of the sparring in, though the grappling was on the other side of the mat. There was also plenty of stand-up sparring, but I personally stuck to the ground. Again, will have to look at the video for that – Jadon was particularly proud of a nice throw he got, which is definitely on the vid.

Turnout was pretty good, meaning that we ended up paying a mere £4 each. Unfortunately, most people weren't able to hang around for drinking, though solfish and Madgrenade had a couple of pints in the onsite bar before heading off. That left Brian, me, Jadon and Sasha to hit the pubs in Oxford: I did take a picture, but annoyingly seems to have been eaten by my phone. Suffice to say, had a good night drinking and chatting, as usual sticking with the red wine. I would have gone for sherry, but thought I'd keep things simple given the size of the queue at the bar ;).

Bran's camera captured pretty much the entire thing, so for around two hours of throwdown goodness, check out the video page on Bullshido.
slideyfoot at 23:23
Share