Theory and Technique was one of the first BJJ instructional books on the market (I think Pedro Carvalho's Brazilian Jiu Jitsu: Vale Tudo may have been the very first, in 1997, but I'm just going by the Library of Congress search results for 'Brazilian jiu jitsu'). Since then, the quality has improved vastly, with superb volumes like those produced by Ed Beneville. Arguably it is unfair to judge an older work by its successors, but on the other hand, both books are currently available to the consumer, so I'm reviewing on that basis.

I'll start with the negatives. The layout of Theory & Technique is erratic and illogical, because techniques are somewhat arbitrarily assigned to belt levels. Far more sensible would have been arranging them by position, or categories like 'chokes'. I'm sure Peligro and his co-authors had their reasons, but their choice of organisation makes for a counter-intuitive read.

Colour photographs (normally between five to eight per technique) are accompanied by a reasonable amount of mostly helpful description. Unfortunately the distinction between the two Gracies is blurred because they're both wearing a white gi. Instead, one should have worn a blue gi while the other put on a white gi, as then there could be a clear reference to 'blue' and 'white' (like in the aforementioned Beneville books) rather than 'Renzo' and 'Royler'.

Personally, I disliked the inclusion of many 'self-defence' techniques (for want of a better word: for some related thoughts on that issue, see here), but that is a subjective criticism: it isn't something I care about, so I'm not in the best position to discuss the relative merits of the self defence in BJJ: Theory & Technique. 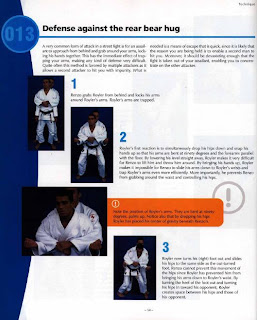 Also, the situations are things like bear hugs and being grabbed by your shirt, so it certainly isn't at the rather ridiculous level of a later volume, the notorious BJJ: Self Defence Techniques. In that 2002 release, Royce manages to demonstrate unarmed defences against somebody pressing a gun into his stomach with a straight face (the text on page 66 does at least warn the reader it should be a last resort, along with the unsurprising revelation that you're in danger of being shot).

On the plus side, the historical and theoretical sections of BJJ: Theory and Technique are excellent. The comparable segments in Mastering Jujitsu (which Renzo and Danaher produced two years later) are even better, but if you don't have that book already, BJJ: Theory and Technique does a similarly accomplished job of detailing BJJ's origins and philosophy. You also get what was then recent biographical information on the authors, as well as Sheik Tahnoon bin Zayed, who was instrumental in setting up the prestigious Abu Dhabi Combat Championships.

It’s a shame the book doesn't have a more sensible categorisation, as the majority of the techniques included (aside from my reservations over the 'self defence') will serve any BJJers well. For example, several of the sweeps I've been trying to use in sparring are featured, referred to in the book as the hook, sickle (which Nick G showed us, though he didn't call them that), handstand and star sweep. Yet due to that bizarre layout, instead of the handstand sweep being followed up by the star, there are inexplicably over 100 pages between the two.

It would appear there were some strange decisions at the editing phase. The handstand sweep is included under 'purple belt', while the star sweep is apparently 'black belt': the reason given, as far as I can tell, is that the star sweep is of greater complexity. Others might disagree, but I would say they're both relatively basic sweeps.

For its day, Brazilian Jiu Jitsu: Theory and Technique (available to purchase here in the UK, or here for the US) was a reasonably good compendium of techniques, which despite the haphazard layout gave a broad perspective on the practical and theoretical aspects of Brazilian jiu jitsu. However, while I don't think you'll be disappointed if this is your first purchase, it has long since been bettered in terms of presentation and technical coverage. Therefore, unless you are especially interested in the self-defence aspects of BJJ, or don't already own Renzo's Mastering Jujitsu, I would recommend you pick up more recent publications rather than BJJ: Theory & Technique.
slideyfoot at 18:44
Share