I first tried a proper judo class in 2005, but got injured three sessions in, so it was long past time I gave it another try. That previous stint of training meant I already had a gi for my next attempt at judo in October 2008, but because I wanted to bring my gf down to class too, I'd need a second suit. Black Eagle offered their basic 'Adult Elite' judo gi for the fairly low price of £25, which seemed a good deal (especially as they were running a 10% discount promotion at the time).

Although I haven't trained as much judo as originally planned (largely due to a change in circumstances that means I'm not at Warwick Uni as much as before), I've had no problems with this gi in the judo sessions I've made it to so far. It hasn't shown any signs of wear and tear, and after a few washes and one 30 minute session in the spin-drier on high heat, it has shrunk sufficiently for comfort.

This gi felt a lot baggier than my other judo one, which is especially noticeable when I've worn it for BJJ, as that provides my training partners with more handles and makes it easier for them to secure a choke. On the other hand, just means I have to work harder on my defence, which is probably a good thing. It also enables me to use my own gi to attack, wrapping up their limbs, or at least it would if I had any idea how to do that properly. ;)

It is also fairly light and not too stiff. That means I often grab this when I want to bring a smaller gi, as the Black Eagle packs up tighter than my Padilla counterparts (especially the single weave). It didn't cost me very much, so I'd also be more likely to take this one traveling, as it wouldn't be as much of a hit to my wallet as if I lost a higher quality purchase. 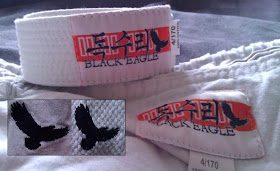 Compared to the Black Eagle BJJ gis, I prefer the simpler design of their judo gi. There aren't any large rectangular patches with 'Black Eagle' in huge letters, just a subtle and quite stylish eagle logo on the arm, with a small patch displaying the full logo on the trousers and lapel (the eagle picture, some kanji and 'Black Eagle'). I've never been fond of large patches, so this is a big plus point for me.

Unlike some gis, you also get a white belt included: all in all, perfect for somebody just starting out in grappling, who therefore may not want to splash out on something more expensive (although the white belt is for judo, so lacks the black BJJ rank strip). Once you've decided you want to stick with BJJ, and are therefore willing to spend a bit more, my BJJ gi of choice is Padilla & Son (particularly if you are in the US).

Update August 2014: Sadly, the company no longer exists, as per this status update on their Facebook page. To quote the founder, "Due to the incompetence of the people we effectively sold our business to, and from which we still earn a living through a percentage of sales, Black Eagle has now ceased trading. Those concerned still owe us £20K, plus earnings, and have left us completely penniless. So, if you see cheap Black Eagle gear being sold, please don't buy it, we get nothing for it, and you will just be lining the pockets of the liquidator."
slideyfoot at 15:04
Share