The first UK throwdown of the year is the closest I've seen so far to a London venue, which would probably result in the biggest turnout as there are so many people training there. Or at least that's the theory: increasingly attendance has been small, and its also increasingly been almost all BJJers. This time round, Mark and I both made the trip, as did Alan (the only non-BJJer, who was also at Oxford last year). That was it in terms of people willing to actually travel, as like Belfast, the rest of the numbers were made up by locals who train at the venue anyway. 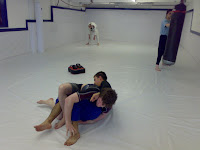 Not that I mind, as I'm there to grapple. It would be nice to see more faces from Bullshido, though we did lose a few to a BJJ competition on the same day. I was looking forward to rolling with Mark and Jadon again, as its always interesting getting feedback from people you only spar once or twice a year. The throwdown also gave me a chance to take a look at the Andy Roberts Academy for the first time: great venue with plenty of mats, once I found it after calling Jadon (its up an alleyway, so I totally didn't notice it initially). The only negative is the current lack of showers (which I assume will be rectified at some point in the future).

Before the sparring started, there was a drill I wanted to try out, having seen it on one of Matt Thornton's Straight Blast Gym clips. The idea is to spin back into guard as somebody tries to pass, first gradually building up the movements you need to master. That begins by swinging one foot right over to the other side, then doing the opposite. Next, you try and swing that foot further, coming up on your shoulders, using your upper back to spin. Finally, you swing the foot right over, spin around on your back and shoulders, then return to the previous position.

On the clip, this was done with partners, but as that's going to be rare, I wanted to work on the alternative, which is doing it against a wall. After swinging my legs over and back a few times, I decided to first ask Mark if he'd seen the drill before, as he's been training at SBG Dublin. Watching him do it made me realise the importance of the shoulder, so I eventually managed to get a full spin in going in one direction, but not the other. Something to practice at home.

My first roll was with Alan, after showing him the basics of shrimping and bridging, then how to combine the two for a fundamental side control escape. As he isn't a grappler, he also unsurprisingly hadn't brought a gi with him. That meant I didn't have my usual grips to play with: its been a good while since I've done any nogi, and I'd forgotten how limited I feel once I take off the gi. 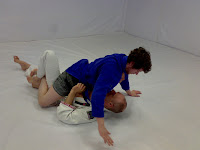 Next up was Mark, where we maintained a relaxed pace. Largely that was because Mark was looking to work his defence, but unfortunately I'm one of the worst sparring partners for that, because I'm so passive. So, lots of staring at him without doing much when in his guard, though I did try to stand once or twice. Mark was wearing a gi and shorts, meaning I didn't have any trousers to grab, but my guard passage is sufficiently terrible that I don't think it made a whole lot of difference.

In my guard, I'm continuing to try and look for triangle set-ups, but its very early days. The clips I've seen of Ryan Hall have been useful, so I'm looking forward to getting hold of his updated triangle instructional, whenever he releases that. Anything that uses the legs is good, as are chokes, because that should hopefully involve less need for strength.

I also played a bit with reverse De La Riva again, which worked better this time, but I still couldn't initiate the sweep. I was looking for the far leg to hook, but I think I need to break their posture better first, forcing them to step forward. Again, I'm not using my legs enough to put my partner under pressure, and I'm also being a bit too relaxed under side control. On the plus side, Tran's side control escape (where you simply bridge into them as they bring their leg over to mount) continues to work well for me.

The last part of the roll was all choke defence, as Mark took my back. I used the 'Shirley Temple' defence Ais showed me last year, where you clamp your hands to either side of your jaw and neck. I was also trying to get into Saulo's 'survival position', where you scoot down low, but couldn't clear Mark's hooks. After he shifted to a body triangle, I was looking to footlock him (as Christina did that to me every time I went for a body triangle), without really remembering how to do it.

Afterwards when I asked Mark for feedback, the exact same response as when I first sparred him in 2007: movement and defence is ok, but need more aggression. Sitting up in guard was a more specific point, as I'm tending to lie back when I should be up and attacking. I always used to go for sit-up sweeps, so that could be a useful technique to revisit, especially with the various options that branch off from there, like the kimura and guillotine (or indeed a triangle, as Ryan Hall demonstrates).

On top, I have to put them under pressure, so rather than just vaguely holding the legs and hanging back, I should drive my hips forward. Also, on the body triangle, it turns out that what I was doing was actually akin to going for a heel hook, so will have to avoid doing that in future. I seem to remember when Christina did it to me, the pressure was different and far less dangerous, so will have to look into the proper defence.

Finally, I went with Jadon. Remembering last time and also going by his blog, I expected him to push the pace a bit, so wanted to save that for last. It started off with repeated collar choke attempts by Jadon after he moved through to mount, which I only narrowly escaped. My defence was technically pretty poor: on one of his attacks in particular, it was purely grabbing the arm and pulling, so that would never work against anyone bigger, not to mention in competition you'd soon get knackered.

After that, it was my turn to try some offence, but strangely from under side control. For some reason, it was relatively straightforward to bring my legs up for a reverse triangle (I think? Triangle in a weird position, anyway), but I wasn't able to finish, despite locking it on several times in a row. I also tried attack the arm (as it was twisted so the back of the elbow was facing up) by pressing on the elbow, but again couldn't find the right spot.

Then finally there was also the kimura to go for from there, but I wasn't able to stop Jadon grabbing his belt. Rolling on top in that position didn't help much, though I guess in a competition environment it would at least get some points (though I give up position so easily, I'd think I'd always be way behind on points in a competition environment).

From chatting afterwards, it turns out that what I should have done is grabbed Jadon's far sleeve and pull it towards me. That would have then put his shoulder in place to squash against his neck, meaning I could finish the triangle. So will have to keep that in mind for next time, though I'm assuming its normally rare to get into silly position like a reverse triangle anyway. Still, fun to play with the submission.

Alan and Mark did some striking training, though I didn't see much of it, and James, one of Andy Roberts' blue belts, popped along later. Mark and Jadon sparred with just about everybody, though as ever I was lazy and just went with a paltry three. Sid completed the group, yet another BJJer from Andy Roberts, who also started posting on Bullshido recently: the only non Bullshido person there was James.

Mark didn't have his memory card with him, unfortunately, so no video, but I did take a few pictures on my phone, which I've spread throughout this post. Next throwdown should be in Belfast at Queens again, so hopefully I can make that: as ever, all depends on finances.
slideyfoot at 22:00
Share