Article #4, by Can Sönmez [FAQ Entry]

As I mention every time I see yet another "what gi should I buy" thread on BJJ forums, my first set of rolling pyjamas was a £20 judogi, bought through the university team. The material around the knees is beginning to get a little frayed, but the gi is still going strong after four years: my £25 Black Eagle judogi is in similarly good condition. So, why is it that so many people are willing to drop upwards of $140 on a heap of cotton?

I suppose it's a reflection of broader clothes-shopping habits. Some people just want something functional: all my trousers come from shops like Millets, because my main concern is lots of zip pockets. I look for something cheap (my last pair cost me £10) that works for the job at hand. Others want the trendiest label, and there is certainly no shortage of them in the BJJ gi world. I was once surprised during an RGA conversation, when somebody explicitly stated they wanted a well-known brand: low cost and practicality didn’t come into it.

The gi is also sports equipment, which I sometimes find easy to forget when looking at the astronomical price tags and flashy designs. As with many sports, that also involves an element of supporting a team, but unlike football, BJJ offers the chance to be an active member of that team. Hence the flourishing trade in club patches, with some instructors even insisting they're essential training wear.

For example, I have read that Xande Ribeiro said "without it you are like a stray dog, only out for yourself". His teacher Royler Gracie is known for giving push-ups to any visitors arriving to train at Gracie Humaíta without representing their team. Then there is the insistence of several Gracie Barra schools that you must wear an official Gracie Barra gi, as if it were an identifying uniform as well as protective clothing. 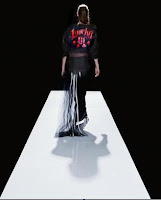 I would assume that high-end examples like Lucky Gi and Shoyoroll can offer enhanced quality rather than merely aesthetic improvements. I've never owned one, so that will remain an assumption. However, the fashion aspect of other options is obvious: the growing female market makes this clear. CatFight caters specifically to women who want something more than a plain white gi with no sense of style, and therefore provides a wide array of bright colours and attractive decoration. It is perhaps part of women's greater ability to communicate (to make a generalisation) that they tend to be more expressive in their choice of clothing.

Thus far, I've bought nothing but plain white, with as few labels as possible. That too could be seen as a 'fashion' of sorts, in that I'm intentionally avoiding anything that makes me stand out. I've noticed this is common to a number of men, who turn their noses up at any concept of fashion. Different colours, patches and brands go towards emphasising individuality, but it also draws attention. Therefore my choice to stick with the most boring gi available is a reflection of my lack of flamboyance in everyday dress, and general introverted nature. Not to mention that there are certain people who take sartorial innovation as an incentive to up the intensity during sparring.

Of course, I do have a few more garish items in my wardrobe, like the bright orange Bruce Lee print shirt I bought on Khao San Road in Bangkok five years ago. I somehow doubt I'll ever find myself picking up the gi equivalent, but you never know: perhaps in a decade or two, I'll feel confident enough in my skills to venture beyond the safe (but bland) realm of the pure white gi. ;)

Update October 2014: It's taken five years, but I may be turning towards the dark side. As of this month, a black gi is now regularly in my rotation, along with a blue one. We'll see if I start end up wearing bright green or something, but at the moment my BJJ bling is still 99% restricted to my fabulous nogi wear ;)

Update February 2015: Not bright green yet, but I do have bright purple. Bright green will be following shortly, among others... ;)

Update July 2017:Several shades of green, plus tie-dye. Think I've hit peak colour, but we'll see if I can come up with anything more ridiculous in the future. ;)