Short Review: If No Holds Barred was the story of MMA's birth, then Total MMA charts its growth to adolescence. Snowden brings Gentry's story up to 2008, in a book double the size of its predecessor. Total MMA spans the takeover by Zuffa, the rise and fall of PRIDE, and the entrance of MMA into the mainstream, thanks to The Ultimate Fighter and Elite XC. As with Gentry, there are plenty of anecdotes and first hand sources: if you liked No Holds Barred, then you're definitely going to like this. Available to buy here (or in the US, here).

Full Review: MMA is still a young sport, but given its recent rise to prominence and colourful beginnings, it makes for an interesting historical study. The first book to tackle that in any depth was Clyde Gentry's No Holds Barred, and for a long time that and The Gracie Way were the only real sources. A few years later, that market has expanded: the number of serious attempts at historical dissection remain limited, but they're beginning to appear more frequently. The most extensive is Total MMA, clocking in at four hundred and eight pages (at least in the large format paperback edition I own). Best of all, Snowden makes sure to footnote everything, a big point in his favour (part of the reason I started my long BJJ history post was frustration with a lack of clearly referenced sources). 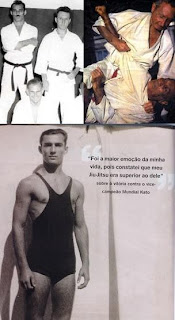 Rorion's version of Gracie history initially wins out, such as the long-standing myth Snowden repeats on page 16, when he says Hélio's "brothers George and Carlos were excellent athletes and good-sized men." On the contrary, Carlos was around 135lbs: looking at pictures of them side-by-side, there appears to be little difference between the Gracie patriarchs. This is why the story that Hélio allegedly had to modify Carlos' techniques, due to his size, makes little sense (not to mention that Jigoro Kano wasn't exactly large himself).

Still, Snowden generally doesn't swallow the propaganda, as can be seen from his discussion of the Kimura fight, noting the shifting accounts by Gracie family members over the years. He also makes plenty of subjective judgments, to the detriment of the Gracie legend. This is one of the immediate differences from Gentry's earlier work: Snowden is not shy about sharing his personal opinion on figures within the history of MMA. His depiction of the Gracie family on page ten kicks off that trend:

The tape would be edited to make it appear Rickson dominated the fight: Duarte’s knees to Rickson’s body were removed, and the times he had the advantage on the ground. Then the tape was used to sell the Gracie brand of “self-defense.” Welcome to the world of the Gracie family and Gracie jiu-jitsu, where unprovoked thuggery is commendable and promoting the family name paramount.


That continues later, on page 142, where Snowden claims that Ryan Gracie's trouble with the law was perfectly in keeping with family tradition (for the full story, and various other unpleasant sides to Hélio's character, check out the startling Playboy interview with Hélio, which Snowden references):

The Gracies had a history of lawlessness, starting with Hélio Gracie himself. Hélio considered himself above the law, and with good reason. When he almost killed luta livre champion Manoel Rufini dos Santos in a street brawl, he was sentenced to two and a half years in prison. But he was a Gracie.


Like Gentry, Snowden also delves into the 'inside story' of MMA, thanks to interviews with first hand sources. For example, on page 69, Mikey Burnett describes what it was like going drinking with fellow members of the Lion's Den after several months of hard training:

“We went to a bar in some fucking Podunk town and Ken made me strip on stage. The bouncers were going, ‘Get down.’ And I wasn’t getting down. Everybody else was sitting there making me dance. I don’t know what the guy who owned the bar was thinking. It was all of us, Maurice Smith, and I think Mark Coleman was with us. I went behind the bar and grabbed a fucking bottle of Jack Daniels, a big chocolate birthday cake they had back there for some reason and just helped myself. We were retarded. One of Ken’s brothers got arrested and I was supposed to be watching him. Then Frank beat up one of Tank [Abbott]’s guys. He threw a pickle or something at Frank when we were coming out of the hotel and getting into a cab, and Frank beat the fuck out of him. Later that night we were on the top of the hotel throwing full beer bottles out of the window. Out of our fucking minds.” 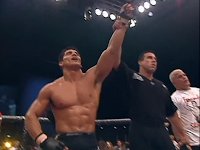 This is part of Snowden's focus on specific fighters and camps, in contrast to Gentry's event-based approach. For example, Snowden has chapters on the Lion's Den, Frank Shamrock's 'Alliance' (with Maurice Smith and Tsuyoshi Kohsaka) and Miletich Fighting Systems, led by 'Croatian Sensation' Pat Miletich. He also concentrates on individuals within more broadly based chapters, like Snowden's discussion of Antonio Rodrigo Nogueira and Fedor Emelianenko in 'The Growth of Pride' section.

Taking personalities as his anchor is a good strategy, and makes the narrative even more compelling. Japan's integral importance to MMA is also investigated in greater depth, with a whole chapter on Pancrase, several on PRIDE, and even one on the bizarre (but impressively lucrative) Bob Sapp phenomenon.

The biggest difference, however, is a simple matter of publication date. Gentry is relatively thorough up until UFC Japan, after which he starts to summarise heavily, finishing up his story with the announcement of a new TV series, The Ultimate Fighter. By contrast, when Snowden begins his exploration of TUF, it is around half-way through the book. As Snowden explains, before TUF, the UFC was struggling, but after TUF, it began its emergence into the mainstream. He spends several chapters dissecting its impact.

Interviews with the participants demonstrate that despite the success it would later bring to the UFC, actually being on the show was often very unpleasant. Snowden quotes original TUF alumni Bobby Southworth, who told him on page 217:

"They put us in a house with a septic system designed for four people. There were 16 people living in the house. So two times raw sewage flooded both of the downstairs bathrooms and was left there for up to three days,” Southworth said. “Several of the fighters got pretty sick. Stephan Bonnar had some kind of mutated impetigo, and Sam Hoger got a flesh-eating virus. I got some kind of weird respiratory infection that caused me to cough up blood.”


That success led Zuffa to the kind of positive media coverage unthinkable during the reign of Meyrowitz and SEG. However, it also led to the unfortunate development of what has since become known as 'the Zuffa Myth'. Snowden gives this bit of historical revisionism its own section, starting on page 266:

The official story goes like this: Zuffa bought the UFC from SEG in 2001 and had a lot of work to do. SEG had run from sanctioning and didn’t want to work with state regulators. Zuffa took the opposite approach and brought in many innovations. They added rules, created weight classes, added rounds, and allowed the referee to stop the fights. These innovative changes allowed the company to finally get sanctioned and get the sport back on pay-per-view.

This tale was repeated in a newspaper or magazine article practically every week in late 2006 and through 2007. The UFC was hot, and this was its spin. The problem? This tall tale is almost entirely untrue. The UFC had always had rules. The referee was able to stop the fight from UFC 3 onwards. The first weight classes were created at UFC 12. UFC 15 saw SEG ban head butts, kicks to a downed opponent, and strikes to the back of the head. Five-minute rounds, actually in effect at UFC 1 but never enforced because no fight lasted five minutes, were implemented again at UFC 21. By the time the UFC had its first show in New Jersey in November 2000, almost every one of the UFC’s current rules was already in place. The sport Zuffa promotes is pretty much exactly the same sport SEG had been promoting for years. But that just makes the UFC story too complicated for a mainstream reporter looking for a quick and easy story about the next big thing.


The UFC was synonymous with MMA, thanks to TUF. The media didn't know any better, and Dana White certainly had no intention of letting them think otherwise. Nevertheless, at the time Snowden was writing, it seemed as if there were potential challengers to that monopoly. He begins by discussing Elite XC, and the man who was responsible for both its rise and fall, Kimbo Slice. The IFL is also explored, along with Affliction and HDNet. Unfortunately for Snowden, Total MMA was published before the collapse of almost all of them, though he could at least make predictions.

In many ways, Total MMA acts as a sequel to Gentry's No Holds Barred, if a little more subjective and a good bit longer. More stories, more fights, but most importantly, more personalities. There is still much to be said about MMA's history, such as the fascinating story of women's MMA, but for now, Total MMA should quell your appetite. Available to buy here (or in the US, here).
slideyfoot at 16:44
Share