Article - Kyra Gracie and the Treatment of Women in BJJ

Article #8, by Can Sönmez [FAQ Entry] 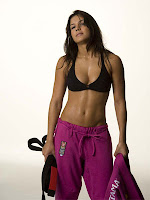 One of the threads you're almost guaranteed to see on a BJJ forum, along with "what gi should I buy" and "when should I compete", is a series of photographs like the one on the left, featuring Kyra Gracie. That will be accompanied by a succession of posts along the lines of "man, I'd like to be in her triangle!" Essentially, it's akin to a bunch of drooling frat boys in a locker room, crowded around a dirty magazine, giving each other macho slaps on the back after every lewd comment. Kyra's looks are discussed far more often than her technique.

It is a sad reflection on our society that female athletes are often objectified, their abilities ignored in favour of their appearance (women's tennis is a well-known example). Women who do not pander to that trend may find their achievements fail to get the recognition they rightly deserve. For example, I think everyone can agree that winning two gold medals at the Mundials is an incredible accomplishment, especially if you do so with humility and skill. Yet I rarely hear people talk about Lana Stefanac, the first American woman to win both her weight category and the absolute at the highest levels of BJJ, while still a brown belt. I suspect it is because she is large and powerful, a very different body type to the petite Kyra Gracie.

Emily Kwok did a great interview on Kombat Clinic back in December last year, which fits with this topic. I felt the following quote stood out:

[...] some men still believe that this is a man’s sport and a man’s world. And those types of men could care less about the fact that I managed to achieve anything at all, because they feel that there really is no room for women to be taken seriously. At most, they will say that you are good at what you do ‘for a girl’. They believe that your Jiu Jitsu is not the same as a man’s Jiu Jitsu, they feel that your technique and understanding of the sport is inferior [...]

I think we struggle greatly to be appreciated on the same level as our male counterparts. Women have been doing a phenomenal job representing the sport, providing some of the most exciting matches at elite level tournaments. But we still don’t get much press coverage; we are never talked about as much as the men, and I feel that we still have a long way to go. I think we are still sometimes seen as a novelty, and not seen as serious athletes.

Stefanac herself related a particularly relevant experience in regards to MMA, a sport in which she both competes and trains others. She spoke to Psychology Today about managing female fighters:

You've got this whole Barbie-doll thing, where a promoter will call me and be like, "Do you have a girl at 125 pounds I can use?" Yeah, I sure do. Then they say, "But what does she look like?" How does her appearance affect her fighting?

There are some good signs, however. Shawn Williams made a point of emphasising the excellence of female BJJ during his commentary for the 2009 Mundials. In the US, several senior female belts run a Women's Grappling Camp, an idea which is set to come to the UK soon. Open Mats for women are also available on both sides of the Atlantic. Meg Smitley organises regular events at Dartford MMA, while in the US, there are frequent opportunities in Richmond, VA.

Hopefully with the continuing growth of female BJJ, a woman's ability on the mat will become a more prevalent point of discussion than the way she looks.