I'm not quite sure how, but I busted my left wrist at some point last week. The only possible cause I can think of is that shoulder lock with the lapel, though I don't remember my wrist hurting at the time. Either way, for most of last week, my left hand hasn't done a whole lot, in the hope that resting it would mean it would be ok for tonight.

It was definitely improved, but still sufficiently sore that I didn't want to risk aggravating the injury by putting any weight on my wrist. So I decided to try and train around my wrist instead, which fortunately was possible tonight because there were enough sensible blue belts training. I often pair up with Howard, who I knew I could trust to avoid that wrist.

Technique started with the usual GB fundamentals stuff, this time a takedown from a bear hug. The interesting part was that it moved into some knee on belly submissions, starting with the usual far armbar if they push on your knee with their hand, followed by a choke.

You start by opening up their collar and getting a deep grip with your hand. The second hand slides on top over to the other collar, but only your thumb goes inside rather than the four fingers. Drop the elbow of that second arm across their neck, so that the wrist and forearm presses into their throat. Finally, put your head to the floor on the top arm side, squeezing to secure the submission.

Groundwork was mount again this week. Kev started with the basic spinning armbar, where they have their arms pushing straight up. That means you can put your hands around one arm on their chest, hop up and spin directly into an armbar, making sure to slide down their arm to leave as little space as possible.

As that is highly unlikely to happen with anyone a little more experienced, Kev then progressed to the more common armbar from mount. Shift up into high mount, knees into their armpits. If they're using a standard defence, with their arms crossed to protect their neck, this should shove their arms up. Slide your same side knee up past the top arm, turning to face their other arm.

Your other leg will curl around their other arm: all the way through, your legs need to stay tight, as otherwise they'll have a chance to escape. Slide your same side hand past the crook of their elbow, then bring your same side leg over their head. Kev likes to cross his feet (as he finds that results in better control), then drop back for the armbar. 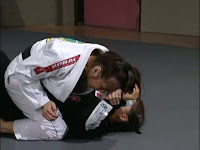 Finally, we went through the typical Americana from mount. As I couldn't press on the arm properly due to my wrist, I took a leaf out of Cindy Omatsu's book and drove it to the floor with my head instead. Looking at the DVD again, I see that she grips differently than I was before bringing her head into the picture, grabbing the wrist with one hand. That's definitely something I'd like to try in sparring, as I can never get the arm loose for an Americana: keeping my base would be more problematic, but worth a go.

As I couldn't spar properly, I was going to just go light with Howard, but Kev asked me to help out a beginner instead. This made sense, as he had a messed up rib, so couldn't spar full on either. It was only his second class, so I went through the two basic mount escapes with him, also showing him how to secure a low grapevined mount. His rib was too tender for me to do anything on top, so we stuck with me escaping his mount, then drilling technique. I tried to keep things simple and not overwhelm him with information: I'm enjoying the opportunity to practice that element of BJJ, though it is a little more difficult when you're both carrying injuries.

Unusually, Kev then got everyone to free spar, starting in mount. That's the first time I've seen him let people do that in the beginners class. In the case of my training partner, it led to more teaching of the basics, where I tried to show him a simple standing guard break and pass. Again that wasn't easy, due to his rib, but hopefully getting a first look will be of some use to him further down the line.

When I decided to train around my injury, I'd forgotten one important detail: I take lots of notes, and I'm left handed. With my wrist out of commission, I couldn't write with my left. Fortunately, I've practiced enough with my right that I could just about scribble something using that hand instead. For some reason, I used to randomly try and write with my other hand back at school: paid off tonight. ;)