Somebody brought in a weighing scale tonight, presumably because a few competitions are coming up in the next few months. Naturally everyone went and weighed themselves, and it appears I'm fatter than I thought at the moment. Normally I weigh around 65kg without the gi, but the scales told me I'm currently 71.5kg whilst wearing it. So, I must be at least 69kg or so without the gi right now. That annoys me: I'm determined to get down to my normal weight by next week. Of course, eating a whole tub of ice cream yesterday probably didn't help. Ahem. ;)

Kev started off technique tonight by taking the back, this time after sprawling against a shoot. For the purposes of this drill, you end up facing their turtle, with them reaching for your leg to initiate a takedown from the knees. Drop your hip on that side (if I'm remembering correctly), then bring your opposite arm over their head. That should kill their grip on your leg, so you can now circle around past it, and take the back in the same way as Tuesday, finishing with a RNC.

He also advised that to finish the choke, it can be helpful to roll towards the elbow of your choking arm. That will make it tougher for them to escape. Conversely, if you're on the receiving end, then the fingers of their choking arm point you route to freedom.

The next choke from the back was referred to by Kev as a single collar choke. I think it might also be known as a single wing choke, but I'm not sure. You have a deep grip on one collar. Your other arm threads in front of their same side arm and behind their head. Pull their collar to the opposite side, simultaneously pushing on their head with your other arm, while also moving that other arm towards the opposite side. 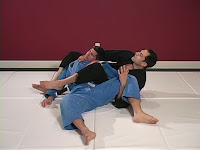 Finally Kev demonstrated his favourite, the bow and arrow choke. Again you grip their collar, but this time, it doesn't matter too much if your hold is a little loose. You then grab their same side pant leg with your free hand. That will enable you to swivel on their body, until you can bring your leg over their shoulder (because you have a hold of their pant leg, it should be difficult for them to take advantage when you shift your hooks). Move your other leg up to meet it and cross your feet. You can now use pressure from your legs to effect the choke, pulling on the pant leg if you need to.

Sparring from turtle, I was able to eventually escape both Howard and Callum, but it felt rather sloppy. I could generally free one hook, then secure a leg with both of my own. I then just about managed to block their other hook from re-establishing. However, I was struggling to turn to either the top position (if I was facing the ceiling), or spin to half guard (if underneath). Could be because they had an arm under my armpit again. I tried grabbing a leg and driving, but that didn't work either. Still, I guess it's better than being fully back mounted.

I found that on top, I was leaving too much space. Callum is particularly quick at shifting back into guard, managing to knock me out of position, then just rolling over his shoulder to replace guard. Howard also exposed that space, though he preferred to roll to the side. Either way, I was doing something wrong that I wasn't doing on Tuesday, as I managed to stay on top and eventually secure the back that time. Must remember to keep my hips low, and take care that when I move, I'm not leaving them an escape route.

Unfortunately I managed to slice my finger on somebody's gi, as I noticed there was a load of blood seeping from under my fingernail. I don't think it was a large cut, as washing it in the sink seemed to get rid of most of the blood fairly quickly. Still, I didn't fancy messing it up further on someone's abrasive gi, especially as sparring from back mount tends to result in lots of finger friction. I did have a quick roll with Callum after writing down my usual notes and taping up the finger, but time soon ran out.