For those who didn't notice, Matt's awesome blog Martial Farts has changed its name to The Grappling Dummy, which means the URL has also changed, to this. So, you may need to update your links and if you subscribe to the feed, that may need updating too. However, Matt mentioned that Grappling Dummy is set up to forward from the old Martial Farts URL, so quite possible your links will be unaffected.

I also read a good tip from the aptly named BJJ Tips blog, here, about treating mount like it was a reverse guard. Interesting, especially as I knew Kev was continuing to focus on back mount this week, so thought I might have a chance to try it out.

Fundamentals was escaping a standing choke. Pull down on their arm for breathing room, then drop your hips to get underneath them. Lift with your legs, then throw them over your shoulder by twisting to the side.

This will be slightly different if they put forward the leg on the same side as their choking arm. You won't be able to drop and lift them so easily, so instead, you want to make them pull back. Normally leaning forwards as if you're going to try and lift gets that reaction.

As soon as they pull you backwards, hook their leg and circle round. You should now have that choking arm in an awkward position: if you drop your upper body, they'll have to flip to the ground. Otherwise, they're going to hurt their arm. 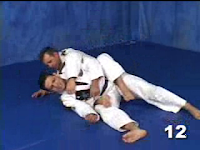 Transitioning to the ground, Kev moved into an escape from back mount. The first thing to note is your defensive hand position. Interestingly, it was the same thing Liam suggested last week: cross your hands under your jaw, pressing the back of each hand against your faces, elbows in tight. This should both block attempts to press a forearm into your neck, while still enabling you to use your hands to intercept theirs.

Bridge up, then keep moving to the side until you've created a bit of pressure on their hook. Push it off with your same side hand and immediately move your hips over onto the floor. You need to make sure that you keep your weight on their chest the whole time, gluing their upper body to the ground.

Gradually walk around with your feet, maintaining that pressure on their chest, bringing an arm over their neck. With your other hand (this will be the same hand that released their hooking foot earlier), reach over and grab their opposite leg. This is to stop them turning into you. It should now be a simple matter to twist into side control.

If you also need to escape a choke, the technique is similar. The only difference is that you have to deal with that choking arm first. Grab it with both hands and pull down, then roll to the side. It must be the side their choking hand is pointing towards. If you roll towards their choking elbow, you're helping them put the submission on faster.

Once you've rolled to the side, you need to release their hooking foot, after which the technique proceeds as before. If you're escaping a RNC, then you begin the same way, but you'll also need to peel away the hand behind your skull. In order to do that, grab their four fingers with the hand closest to it, then pull it off your head.

Be careful, as you aren't allowed to manipulate small joints in BJJ, so it needs to be all four fingers clumped together. Once it is loose, bring their arm over your body until your can trap it under your same side armpit. You can then proceed to escape as before.

The last technique was another choke, this time in response to their defence. You've got a grip on the collar by their neck, but you can't get your other hand low on their other lapel. So instead, just wiggle your hand through until you can bring it behind their head, then choke them by pressing that arm and pulling on the collar. This is only going to work if they have left some space with their arm: if they're clamping their elbow in tight to their side, you're going to struggle to make room.

Specific sparring from the back, I focused too much on releasing hook with my legs. That defensive hand position worked great, as I wasn't in any danger of chokes, but I also wasn't getting too far with escaping. I generally felt too vulnerable to move one hand to brush off one of their hooks, though the one time I did attempt it, my remaining hand was enough to keep blocking submissions.

I did eventually release a hook just by squirming with my legs, but once again I went the wrong way. I should have triangled my legs around the other side, where his hand was under my armpit. That would make it easier to turn. Once I did eventually escape, I ended up straight under mount. Better than having my back taken, but not exactly ideal.

When it came to attacking, I had trouble dealing with Dan's hands. He kept managing to peel off one of my arms, then using that space to turn and escape. I wasn't able to break through his arms for a choke, so instead I had a go at an armbar. That almost worked the first time, but I didn't control him enough with the figure four grip. I should have really pressed his arm into his chest.

As it was, I left too much space, so when I went for the armbar, he was able to slip free. I also must remember to always come under the arm first before securing my initial grip, which I failed to do a couple of times with my later attempts.

I asked Kev if he had any suggestions for controlling their arms when on the back. His response was interesting: use your legs. Basically, you push through the crook of their elbow, reach under your own knee, then grab the gi. Clamp your elbow down, and you've trapped their arm. If you do that on both sides, you've managed to buy yourself a few extra seconds to attack their neck.