Pedro Sauer was recently promoted to 8th Degree by Relson Gracie, a considerable achievement. On the other hand, do the degrees/stripes beyond black belt really have any meaning, given the wild disparity in standards between the IBJJF, Gracie Academy and elsewhere? J-Sho makes some interesting points over on NHBGear, here. 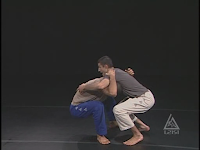 Fundamentals started with how to pull guard, though Kev emphasised that it is becoming frowned upon (Rener and Ryron nevertheless include a variation on Gracie Combatives, as per the pic). However, he also mentioned that if you're up against a seasoned judoka, pulling guard probably isn't a bad idea, which is sensible advice. You start with a collar and sleeve grip. Pull on the sleeve to make them step, then put your same side foot on that hip. Swing around to the other side and drop. If they don't try to posture up, go for the armbar. If they do, lock in closed guard.

Next was escaping scarf hold, when they have their arm under your head rather than your far armpit. First, force your trapped elbow to the floor. Bring your other arm over their head, pressing into their neck. Support that hand with your other arm, to create a strong frame. Move your feet towards their head, until you can get a leg on their head. Lock it under your other leg.

Normally at this point, I would expect to roll up into a sort of technical mount, push on their neck to release my head, then go for a submission or just solidify the position. However, Kev had a different option. Keep your grip on their elbow, cupping it with your opposite hand. Slide the same side hand underneath and through, so that you can then lock it under your armpit, keeping your same side arm on the outside. Lean back, creating pressure on their isolated elbow for the submission.

Moving on to the main class, Kev just showed one technique, an armbar from the guard. Again, this proceeded as normal, until the finish. Instead of raising your hips for the submission, you keep them tight, clamping one hand over the elbow, the other by their wrist. Raise your hips slightly, then push that wrist towards their knee for the tap (making sure the elbow is correctly aligned for hyperextension, which you can check by looking where their thumb is pointing).

Sparring was from guard. I was looking for a high guard again, but Howard has a habit of getting his knee up when I try that, making things difficult. That meant I ended up playing with butterfly guard a fair bit, once again keeping jnp's 'ball' technique in mind, with my knees close to my chest.

I also took the opportunity to practice the Shawn Williams Guard, only to be almost immediately passed. I think I need to be tighter with my free foot, pressing against the hip. Moving into an attack quicker would help too, rather than looking to control and get my bearings.

Interestingly there was a purple belt in class tonight, who I think was called Chris: that belt looked pretty tattered, so he's clearly been doing this a good while. He did mention he had just had a year out due to a broken wrist, but was still far too experienced for me to accomplish anything much. He used the elbow dig pass on me: I didn't react in time to jump into a triangle, which is what I normally aim to do in response.

Passing Howard, I tried the twisting guard break repeatedly, but I'm still missing some key elements. Controlling the hips is a problem, so I need to review my notes, and hopefully get a chance to go over it again with Kev. Ideally I'd do a private lesson on guard passing, as it remains my weakest area by a huge margin.

Then again, I'm feeling much happier once I can make to top half guard. That generally only happens if they open their guard to attack, and I can slip my knee through. As long as I can get an underhook and flatten them out, I've been having relative success using shoulder pressure to pin their torso to the mat, then gradually free my knee and slide into mount. The tough part is getting them flat, and pummelling to make sure I maintain the underhook.

I also tried the twisting guard break on Chris: his response was to try and hook under my leg. That provides a chance to pull their arm under their back, but I couldn't manage to get hold of it before he realised and yanked it out of danger. Might need to raise them up more or something.

He eventually went for a triangle, and I thought I'd got free. However, he was able to suck my other arm in as I tried to initiate a pass. I tried to step over his head to release the pressure and move to side control, but he knocked me off balance, meaning I had no posture and was therefore completely exposed to the triangle.