In case people missed it, fellow blogger Georgette recently popped up on The Fightworks Podcast, talking about the right way to coach somebody at a tournament. Very cool to hear somebody speak when you've only ever interacted with them online!

Still on the topic of bloggers, Seymour from Meerkatsu.com set up a new Facebook group for BJJ bloggers to share ideas, here. If you have a BJJ blog, feel free to join in the discussion (I'd especially be interested in people's thoughts on this). 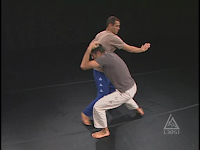 The Gracie Barra Fundamentals segment was a Haymaker defence defence today, which made for a slight contrast to the Gracie Combatives version, where they duck under and move to a side-on clinch. As ever Kev, noted that anyone who is trained in striking won't throw a punch like that, but if somebody does, you perform a motion as if you're combing your hair to block the punch, then wrap over their arm. Step forward with your same side foot, while simultaneously driving your other arm into their neck. That means you can drive forwards and take them down, so essentially a sort of modified osoto-gari throw.

Kev's main focus for the beginner class was transitioning from side control to mount. He began with the basic technique, but with an important tweak. After you've grabbed their knee to stop them snatching half guard, you don't swing your leg over. Instead, step through, bringing your knee under your own arm, then whack your foot on the other side. This has the advantage of making it more difficult for them to bridge and roll you mid-transition. If you have any trouble with flexibility, simply move you hips further towards their head.

That was followed by the knee slide alternative. Again, you progress as normal, but the difference is that you're either grabbing their belt by the hip, or cupping that hip with your hand. You don't let go of that grip until your knee is on the floor: otherwise, they can try to shrimp out and dislodge you.

Often when you try to slide your knee across, they will attempt to block mount by putting their hand against your knee. That means you can either go for the potentially risky option of an armbar from knee on belly, or alternatively, underhook that arm. You can then lift it, putting that limb out of commission, while you complete your slide into mount unimpeded.

Shoulder pressure is key with both of these: I tend to use a gable grip, but Kev mentioned that getting of their lapel and wrapping it around their arm is a strong hold too. It is also essential to isolate their near arm. The orthodox way to do that is to dig your knee into their elbow to pry it away from their torso, then drive up into their armpit. However, as Kev said later when I asked if you could do it without the knee inside, there are other options. For example, Maurição simply drops his hip straight onto the arm, trapping it by their side (as he once showed us in a lesson at RGA HQ, in the context of knee on chest). You can also pin the arm to their chest with your upper body, should they move it into a vulnerable position.

Sparring from side control was purely positional, with no submissions allowed. This reiterated how tough it can be to kill that near arm, meaning that I ended up trying to move around, shifting to north-south, sitting on their head, different grips etc. I was being particularly reliant on gi grips, so made a conscious effort to try and incorporate underhooks as well, along with lots of shoulder pressure and keeping my hips down.

On top with Howard, I didn't manage to do a whole lot. The only bit of success was an opportunistic leg swing into mount while his upper body was occupied, but that wasn't so much about technique as luck and timing. On top of one of the white belts, things were definitely easier, which is where I was experimenting with side control grips and trying to move around to north-south.

However, this specific white belt is definitely getting better, and had some intriguing defences. At one point I was all set, having dealt with the near arm, but he somehow managed to reach behind my gi pants and grab the back of them. That meant I couldn't shift back properly, forcing me to take a different approach instead

Underneath Howard, I was looking to swim through and stop him establishing an underhook, which resulted in lots of handfighting. Kicking my knee high towards the armpit and trying to spin worked well a few times, using my legs to gain purchase on their head to distract them, which in turn helped me rotate. I'm still generally too flat, so must get on side more. I can escape from a flat position and feel comfortable there, but it's a bad habit.

Under the white belt, he stayed very firm with that shoulder pressure, so much so that I started to have visions of cauliflower ear. Apparently the focus on pressure is something I showed him last time we sparred, so good to see I was able to be of some help. However, he sometimes forgot about his legs, meaning I could snatch half guard.