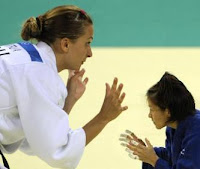 I…am a large woman. That’s not a euphemism for overweight or exceedingly muscular. I’m 6’ tall, with an almost 7” wrist and 22” shoulders. I weigh 180lbs when in good shape. Like the majority of women that train BJJ, I showed up for self-defense reasons (even though, aside from an incident of a man telling me that I was “so tall he wanted to put his fist through my chest”, I’ve seldom felt threatened), but the similarities begin to die off there.

Yes, a large woman will face the same “lady problems” that any other female would in training BJJ…dealing with inappropriate behavior, managing the intensity of sparring with opponents that either want to man-handle you for fun or go way too soft on you because they don’t want to hurt you, feeling out of place as the only female in class…but the issue of size is a creature unto itself. I outweigh most of the women in my school by 60lbs or more and am a solid 10” taller. I worry more frequently about putting too much of my weight on smaller opponents (male and female) than I do about being crushed by the 220 lb guy that shows up on Wednesdays. The idea of being picked up or tossed around doesn’t really cross my mind and sweeps only work if they’re technically clean. Still though, I’m not as strong as men my size, or even those smaller than me.

I’m guessing the guys at the gym have to be thinking something similar…wondering what’s got the Amazonian chick interested in a sport that’s designed to shift the balance of power in favor of smaller, weaker opponents. Their comments on how strong I am, or have gotten are great motivation, but they’ve given rise to some new concerns. I used to worry about being weak. Now I wonder about life beyond the white belt and if my size plus a pigmented belt will cause resentment or backlash. I wonder if my manly size will result in my being manhandled. I’m guessing it will, and that’s fine. Just a new challenge with which to deal. While I’m sure the heel I took to my left breast last class is a problem that’s particular to women, I suspect there are fewer differences specific to gender in Brazilian jiu jitsu than one would expect, and that’s part of what makes it beautiful.

I do think though, that my situation sheds light on an opportunity for instructors, bloggers and others to adapt how they address techniques and abilities. My instructor, (I like his method and think it could be a benefit to both genders) instead of giving advice on techniques that are good for men or women, teaches based on body type or situation…leg length, relative weight of opponent or flexibility. I’m sure there are men out there with legs that are stronger than their upper bodies, be it because of freakish genetics or injury. There are definitely men out there that are small for their gender, and I believe they could benefit from more specialized attention.

All that said, I’m glad to have found the likes of Lana Stefanac, Gabi Garcia and a few other ladies online, so I can see how other large women move and work with women their own size.

Megan is a white belt, who has been training for six months at American Top Team in West Palm Beach under Marcos "Parrumpinha" Da Matta. She maintains a blog at bjiujitsu.blogspot.com