Apparently some blokes were kicking a ball round a field somewhere, which meant that class tonight was nice and quiet. With a good instructor, that is always a boon: Norby ran an awesome session today, benefitting a relatively small number of us. I especially enjoyed it due the focus on what remains one of my favourite areas to work: escaping side control. Better still, Norby spent a lot of time on drilling, and also connected moves together, covering ‘what if’ scenarios.

The situation for this escape from side control sequence is that you’ve been put in a terrible position. They’ve managed to both get your elbow away from their hip, and they’ve also got your other arm to the dangerous side of their head. You need to get that arm out of there, as otherwise it is very vulnerable to attack. You also want to get your other elbow by their hip. 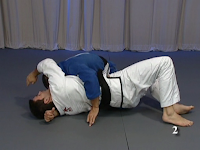 So, reminiscent of a principle seen on Demian Maia’s Science of Jiu Jitsu, the first thing you do is bridge, punching through with the arm by their head. It is important that you’re pressing their head to their shoulder, knocking your arm towards the upper part of their skull. Combined with your bridge and twist to the side, that should enable you to bring your elbow to their hip.

However, don’t bring it all the way through. Otherwise, you’re still in trouble, because they can still crush their weight down onto you, especially as your arm by their head is still in danger. Instead, the elbow by their hip is going to stay pressed against the hip, rather than using your forearm to brace their hip.

That means they now can’t press forward, because your elbow is in the way. Your next task is to get your head arm safe. To do that, dig your hand under their neck, until you can get your fingers around their shoulder (so that they’re touching the shoulder blade at the top of their back, not around the side of their upper arm). You can now bend your wrist up, which drives your forearm into their neck.

This is not only uncomfortable, it also makes it next to impossible for them to push their weight back down. That should mean you can now bring your knee inside, across their stomach. Get your other foot inside their hip (next to your first foot). From there, you can recover butterfly guard, or even go for a sweep.

Of course, your partner is unlikely to make it that easy for you in sparring. Most likely, as soon as you try to shove on their neck, they will switch their hips, sliding through to scarf hold. This happens to me all the time. To escape scarf hold, you’re going to switch from pressing their neck to grabbing their lapel.

So, the hand which was on their shoulder now slides to grab their nearest lapel instead. Again, you’re going to shove into their neck, but this time, you’ll be doing it with their gi instead of your forearm. Keep your arm straight, and you’ll also want to bring your other arm next to it, pushing as well.

Shrimp out slightly, but keep the inside leg out flat. The reason is so that you can keep pressing their lapel into their neck, shoving directly towards your legs. With that leg out flat, they aren’t going to squish their weight onto your thigh. Instead, you can keep driving them backwards, switching your hips to come up in side control. If you end up in scarf hold, be careful that they don’t use the same escape on you: keep your head low.

What if they post with their hand to stop you pushing them over? If they post near your legs, your escape is still good to go: in fact, you can change to a submission. Start by hooking their bicep with your outside foot. Make sure to curl your toes, and also angle your knee towards them. This is to make sure there is enough tension on the arm: otherwise, they’ll just circle it free and come back to side control or scarf hold.

You aren’t going to leave it at that. Having secured their arm with one foot, you’re now going to switch it to your other leg, by bringing that leg over the top. That means you can triangle your legs, putting your partner into the crucifix. From there, you can pretty much do what you want: bring the leg nearest their head over for an armbar, sit up and establish a choke, pick up their leg and go to the back...various options.

If they are more careful and don’t post their arm near your legs, you can’t hook it. Also, it is more likely that instead of posting, they’ll be trying their best to push back into you, to re-establish scarf hold or side control. That’s fine: you’re going to let them do it. The timing of your next move is very important, because you’re going to let the hand nearest their head drop.

If you release the pressure too early, they may catch on that you’re escaping. Instead, you want to make it appear that your arm has just got tired, and they have managed to bend it back to your torso. The other arm should stay straight as long as possible, or they will simply trap your hands with their chest.

As soon as their chest touches yours, they’ll have opened up a small gap by their armpit, right where your hand is waiting. Until they try and push into you, that gap is filled with gi material, both yours and the loose fabric between their arm and side. When the gap appears, reach through.

You can now forcefully bridge, whacking your arm up into their armpit, in the direction of your head. This should fling them forwards, enabling you to scoot down and either take their back, or go for their leg and then drive through for side control.

Norby then spent the rest of the class on specific sparring from side control, which was another cool part of the class. Loads of drilling, followed by the same thing with much more resistance. Like Rob, Norby did king of the hill where one group of people stayed on the mat, instead of whoever was successful switching to take their place.

I prefer Rob and Norby’s method, as it provides a lot more opportunity for practice, instead of just the most skilled people staying on the mat the whole time. Norby didn’t count us off into ones, twos and three, instead leaving it up to us as to who was going to stay on their back. Everyone eventually had a go, but it worked out that I was in the last group of people on their back.

On top, we started in the ideal side control, so as with drilling, the top person already had the elbow cleared from the hip and the other arm past their head. That meant I could work on maintaining the position, blocking the arm from getting to my neck by dipping my head, and switching my hips and adjusting my weight to keep side control.

What I had trouble doing was the next step: going for an attack. I did manage to sneak my knee through to mount on a fellow blue, probably because after all that drilling, people might have been a little less wary of the knee slide. However, that only worked once: also, all but one person in the class was a good bit bigger than me.

That turned out to be a good thing though, as it was a useful test of my pressure from the top (though of course you can never be sure if people are holding back, when they could simply bench press you). I generally could hold the top position with a reasonable degree of consistency, but whenever I looked to attack the far arm, I got rolled. I was trying to base with my head, but without much success. Something to work on, along with combining that distracting attack with attempts to switch to mount.

I also got a good tip from Norby, who I happened to be sparring in front of at one point. I was losing the top position, and attempting to move round to get back in place. They got a knee in the way, in a sort of z-guard position, with the shin manoeuvring for my stomach. What Norby advised I do at this point is switch my base around that knee, so that I’m facing their legs. You can then switch back, recovering side control.

On the bottom, I was able to dig my elbow into place by bridging and pressing the head, but digging the hand past the neck was more difficult. Generally, I got it through when they went for an attack. I was also trying to be careful of my arms, not leaving them out there to get pulled free, and trying to thread my knees to get to turtle. While I found my way there a few times, I couldn’t manage to secure and leg and push through into a takedown (unsurprising, as my wrestling sucks, as does my judo, given that I hate doing takedowns and almost never spar from standing, if I can avoid it).

Great class: I should be training again on Monday, presuming no writing commitments come up. I’ll be doing something rather different tomorrow, which should be fun. Or at least, it seems completely different at first, but I’ll get into that on Sunday. ;)