A Taste of LARP

As this weekend is one of the few where I’m both in Leamington and I don't have anybody visiting, I thought I’d take up an offer from one of the people I work with. Last time my Sunday was free, I headed down to a judo no-gi session, to get in some extra grappling. Yesterday, I was at Gracie Barra Birmingham for Brazilian Jiu Jitsu. Today, I went for something quite different, which at first appears to be the antithesis of ‘alive’ martial arts like BJJ and judo: Live Action Role Play (LARP). 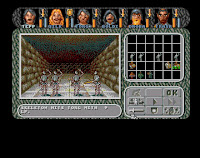 I spent a large proportion of my waking hours before university buried in a variety of computer role-playing games (CRPGs). I have many happy memories of slaughtering goblins, throwing fireballs and building up high-level paladins in Amberstar, Ultima Underworld and Daggerfall, a few of my favourites. If I wasn’t swinging a pixellated sword, then I’d probably be completely engrossed in a fantasy novel, from authors like Piers Anthony, or a series like Dragonlance, Dark Sun or Forgotten Realms.

So, I’ve been strapping on a broadsword and sallying forth for loot and XP for some time: my initial RPG experience was when I first booted up the original Bard’s Tale on a Spectrum +3, back in the ‘80s. However, I’ve only ever quested by proxy. This time, there would be no digital intermediary. I’d be swinging that sword myself.

Before I could get whacking people, however, I needed to get some safety training. Clare, my colleague from work, kindly offered to run through the basics with me on Friday, along with her husband Ian. Contrary to what I had assumed, LARP is not a matter of rolling dice, or totting up variables to see if you managed to overcome someone’s defences. You simply hit them.

You don't use just any weapon, as LARP has specific equipment. They're carefully made, carbon fibre core foam swords (or mace, axe, dagger etc, but Clare and Ian’s impressive arsenal was heavy on swords). So in a sense, there is a martial arts element of sorts, though it is much, much lighter contact than judo or BJJ: you’re acting a role, rather than actually looking for the most effective method of belting somebody with a big piece of metal. 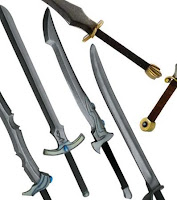 As this is not the Dog Brothers, the (relatively) light contact nature means there are several things to keep in mind. Perhaps the most important is that you can only slice, never stab. That’s because the carbon fibre core of weapons designed for LARP can potentially burst through the foam, if you press the tip into somebody or something (hence why you also can’t rest a LARP sword point-first into the ground). Having said that, there are a few that are ‘stab safe’, like Ian’s enormous axe, because the point protruding from the middle of the axe head is almost all soft foam, which depresses on impact.

The head and groin are out of bounds, though it’s taken as a given that accidents happen. As a general rule, you’re meant to pull your strikes, as you’re not looking to do any serious damage. The foam means you can still give them a good thump, but you don’t want to smack them so hard that it leaves a bruise. Of course, if somebody is wearing a full suit of metal plate armour, you can give it a lot more welly than if they’re wandering around half naked with only warpaint between them and your foam-padded fury.

Even so, as you are hitting people for real, and they’re trying to hit you back, there’s certainly skill involved. Basically, it’s a form of fencing, with carryover from numerous weapon styles (or at least the elements that enable you to both pull your strikes and chop rather than stab). As far as I can tell, the way to improve is to try hitting people, along with getting hit in return. Lots. So in a limited sense, it is ‘alive’ in the Matt Thornton usage of the term (see below video), though there are still plenty of rules and restrictions. Of course, LARP is not a martial art, so there is no stated intention of developing practical combat ability.

In a similar vein, I was surprised that it is possible to fire arrows at people in LARP. The bows look to be much the same as those you’d use for standard archery, though there is a limit of 30lbs to reduce the distance and power. The arrows, however, have a thick wad of foam on the end, both to lessen the force and prevent them getting into anybody’s eye socket.

I’ve got some idea of how to parry from fencing (though I was pretty useless at adjusting to block lower cuts to my legs), but even that brief bit of experience abandoned me when it came to the attack. I’ve only ever fenced with a foil, so slicing was new to me, as made very clear when I practiced with Clare and Ian (both experienced LARPers, who were smacking me at will).

Those restrictions can result in people effectively just tapping you on the shoulder, in order to get the hit. Ian emphasised on Friday that you should make attacks realistic (in role-play terms): some systems have a one strike per second rule, to help make sure people don't simply wiggle a sword along your arm in an effort to generate lots of 'damage' quickly.

Having said all that, during the actual event itself on Sunday, I didn't get involved in much combat. There are two groups to choose from, 'players' and 'monsters'. The 'player' is a created character, with personality, skills, equipment, and if all goes well, longevity. Monsters, on the other hand, are basically there to be killed, especially the kind that featured on Sunday. Zombies, shades and skeletons are have pretty limited hit points, and they don't move too fast either.

I went with the monster party, as that meant I didn't have to worry too much about roleplay. The kind of basic grunts I was playing is never going to last longer than one quest at most. It also meant, theoretically, I'd have more of a chance to practice with a variety of weapons. As it worked out, the two quests were fairly heavy on roleplay, and the bit of combat I did take part in ended rather quickly.

That was down to another part of LARP: magic. It turned out there was a spell (which in LARP generally means saying the name of the spell, with a few lines you make up in front of it, to create a brief verse) that instantly kills people, which I kept falling prey to. I think I only actually got off one swing.

Still, with all the roleplaying, it was entertaining to watch how the plot developed, especially as half the party in the first quest actively undermined the ostensible goal. For example, instead of killing a necromancer with a bunch of zombies, they sacrificed one of their party to him, then got his zombies to help them fight someone else. 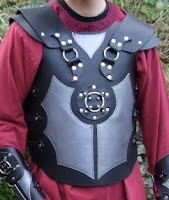 As a 'monster', there was plenty of downtime, as we weren't 'in character': effectively, you're an extra. That meant I had the chance to socialise with my fellow undead, because I didn't have to be in character the whole time. So, when not being slaughtered by adventurers, I was chatting and getting to know people, which is always good fun.

It was also refreshing to see that it wasn't entirely male-dominated, with five women taking part. As with BJJ, the presence of women immediately improves the atmosphere, due to the instant reduction in testosterone. Not that the men weren't nice too: everybody was welcoming, friendly and ready to offer their help: the whole group felt very inclusive.

Something else I wasn't expecting (but it makes sense) was the sheer amount of planning that goes into each quest. The Ref (who both orchestrates and moderates the action) has a long chat with each group beforehand, laying out their place in the plot. I wasn't present at the players talk, but for us monsters, we had clearly stated roles, and a set of actions to follow. The Ref also has to keep running around telling the 'monsters' who and where they need to be ('statting' them), as encounters with the players can be frequent. As the pool of people playing monsters is limited, they have to be recycled. What looked especially difficult is the need to think on the fly if the 'players' don't react as expected, as happened today.

The system used at Warwick Uni is called Scarred Lands, thought up by students over the last six years or so. If you're interested in checking out the rules, they have a number of pdfs to read up on the website. From what I gather, it is seen as relatively straightforward, so ideal for beginners like me.

Should I happen to have another weekend free, I'll definitely look to give this another go. If nothing else, LARP always offers the chance to dress up (or indeed get made up: plenty of people with facepaint and make-up), one of the things I used to love doing back during my undergraduate years. I look forward to pulling on a suit of armour at some point in the future. :)
slideyfoot at 18:39
Share