Two new, well-written blogs popped up this week, from my two favourite BJJ demographics: women and black belts. Angelo Popofski, a black belt under Caique, has started up The Mental Dojo, where he’s already put up some thought-provoking articles taking a more philosophical angle on BJJ, rather than technical. Julia Johansen, who has just started out in BJJ at John Frankl’s school in South Korea, brings the perspective of a woman training abroad (like Rachel over in the Middle East). Check them out.

Also, I was pleased to see Kev Webb back on the mats before class today, which I presume means he is on the road to recovery. Hopefully he’ll be teaching class again in the not-too-distant future, as I rate his instruction very highly. 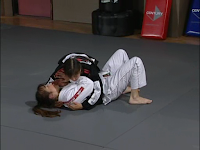 Nathan was picking out some fine details today, which is one of the main advantages of focusing on one area over a long period. We’re still working on side control, but because we’ve been through so many drills now where you’re either escaping from underneath or maintaining control on top, the basic movements have been thoroughly covered. That meant that Nathan could go through three especially useful concepts tonight.

The first was when moving from side control to scarf hold. As ever, you start in a tight side control, having already cleared their near elbow. Pulling them in tight towards you with a gable grip under their head and armpit, dig your shoulder into their face and drive into them to turn them slightly. Slip your hand back to control their near arm as you switch your base.

The detail here is not to simply keep your head low, as I thought. That can help with control, but it also means that with a strong opponent, they can rock you back and forth and make space. It is better to instead thrust your hip into them, driving your ribs into theirs. You can feel the difference if you have someone on top of you in scarf hold, and they drop their head low, then drive their ribs. The pressure into your torso is much greater with the latter option, whereas dropping your head automatically curves your body, so you can’t apply that same pressure to their ribcage.

The next was moving from side control to reverse scarf hold. Again, you’re in that same tight side control with the near elbow cleared. This time bring your arm over their head, then slide your elbow back to their skull. You want to keep sliding, until you’ve pushed their head right up onto your knee. This will have the added bonus of putting their near arm up high and vulnerable. Your other arm will switch under their armpit, to control their far arm.

Put your free hand either by their near hip, palm down and sliding towards them, or grab their pant leg. Either way, you want to block their hip movement. The important detail this time is to roll your hips onto their arm as you switch your base for reverse scarf, keeping a leg back for base. That’s as opposed to what I’m used to, which is simply dropping your hips alongside them. If you roll your hips onto their arm, this does a much better job of killing that near arm. If you merely plop your bum on the ground and slide back, they can still grab your belt and try for an escape.

Finally, Nathan gave us a third option, going from side control to knee on belly. As I’ve said before, I have never used knee-on-belly in sparring, so this was a useful lesson for me. Still from the tight side control with a cleared elbow, lean forward into your gable grip, shoulder pressure into them, raising up on your legs. Move straight into knee-on-belly, sliding your shin into their stomach, slipping one hand by their near collar (you can then straighten your arm to act as a bar if they try to turn towards your). Your free hand will either be grabbing their far leg, or attacking their far arm.

Make sure that the foot of the leg you have on their belly is curled by their hip: don’t leave any space for them to try and hook under with their arm. Your other leg is based back, at roughly forty-five degrees. It shouldn’t be so close that they can hook it with their other arm, but also not so far that it doesn’t give you a solid base.

The important detail I wanted to remember for knee-on-belly was to thrust your hips, rather than driving with your knee. You stay relatively upright, the hip thrust creating pressure on their belly (or sternum, if you’re Maurição Motta Gomes). I still don’t feel at all secure in this position, but with more lessons like this, that should slowly change.

Sparring started with Gary, the other blue belt who regularly attends the basics class on Tuesday. Not long into the spar, he managed to snake his arm around my neck to initiate a choke. I didn’t lean my head back in time to block the grip, and I felt too squished to get a decent purchase on his arm with my knee (trying for Nathan’s shin escape from last week).

I did at least have a solid grip on his leg from half guard, which gave me a bit of breathing room, as well as pulling down on my own gi to loosen up the choking pressure. That gave me time to think where I wanted to be, which was obviously with my head on the other side, so that I wasn’t being choke. Once I eventually got free, I was still thinking about the shin escape, but perhaps the variation from Strategic Guard would have worked better here.

My next two spars were with the two women present tonight, Alexandra (I think?) and Sofya. I was again attempting to keep in mind Roy Dean’s advice to “let people into your game,” rather than just using my weight (they’re both quite small). Sofya was doing a good job of bridging from under mount, but wasn’t shrimping into the space she created. I left an opening, to see if that would help, then mentioned it to her afterwards. Hopefully that was useful, rather than patronising: it can be hard to tell, especially as I’m only a blue belt (and a crappy one at that).

I plan to train at the weekend, before then popping over on Sunday to see my gf after she’s finished teaching her course. IIRC there is some kind of open mat thingy on Sundays now, but I’m guessing that’s only available to those on the next payment level up (I’m on the £60 programme that gets you two lessons a week), not to mention I’ll have already done two lessons by then anyway.