If you haven't already, check out Chrissy Linzy's piece on teaching a women's BJJ class, here: part two is on its way for next week. Also, Matt has put up another great interview in his Grappling Dummy series, this time with Roger Gracie black belt Nic Gregoriades, one of my old instructors, who also runs the excellent Jiu Jitsu Brotherhood site. Finally in blog news, Meg Smitley’s site has moved to a new address, so update your bookmarks.

It has been a little over three months since I started training at Gracie Barra Birmingham, and while he’s been present a couple of times over that period, today was the first time I was part of a class taught by Braulio Estima. His young son was there too, which made for a refreshing family atmosphere: the giggling child was being bounced on his father’s feet in a game before class. Braulio was clearly enjoying playing with his son, even walking the little blonde toddler round the no-gi session to wave at all the students.

Class began with the usual running warm-up, though interestingly Braulio uses forward rolls instead of breakfalls (or at least did today). That moved straight into some stand up drilling: like Roger Gracie, it would appear Braulio likes to use throwing drills to get the blood flowing and joints loosened up.

His instruction was quite quick, focusing on principles, with the techniques tonight connected together. It took me a while to get my head round some of them, though that may be because he has been teaching these earlier in the week, so presumably a lot of the class had seen them already.

Braulio began by moving from north-south to wrist control. At least I think so: I had trouble with this one. The idea was that you start from north-south, having already got your elbows into their armpits. You switch around to their side, backstepping as your bring your far elbow back and your other arm around. The intention is to end up with either one of their arms pulled across their neck and the other gripped around the elbow, or the same position but with both hands around that elbow. However, I must have been missing some detail, as I had difficulty getting to the right place.

I found the next technique much easier to do. This time, you’re going to move from side control to scarf hold, as a counter to their escape attempt. They bridge to make space and swim under your arm, aiming to go to their knees and try for a single leg. Overhook their arm (with what’s called a ‘whizzer’ in wrestling, IIRC), then step over their head. Without ever losing contact with their arm, backstep to move to their other side, rolling your arm on theirs, ending up in scarf hold (you essentially roll your arm in place, using your elbow to keep control). Your other arm will settle into a grip underneath their far armpit, for a strong scarf hold.

The same principle can work as a defence to a single leg. If this time they’ve managed to get that grip on your leg, sprawl your leg back. Again you’re going to overhook an arm and catch it with your elbow. In this case, it will be the arm they’ve grabbed your leg with. As before, swivel and backstep, aiming to move into scarf. If you can’t get the leverage, you should at least be able to move to a stable position from which to attack their turtle.

You don’t even have to break their grip: if your sprawl isn’t quick enough, continue as before. Once you’ve backstepped around to their other side, that hold they have on your leg isn’t going to do them any good. From here, you’re in a relatively dominant position.

Sparring followed on directly, and like last week I started off with Christian. He wanted to work his game from inside somebody’s guard, which was fine by me: makes a nice change from under side control. It also reminded me that I still get rather stuck if the person inside my guard is being defensive and curled up: I need to work out how to pry loose an arm or initiate some kind of choke (I seem to remember that either The Guard or Strategic Guard have some options for attacking defensive posture).

Alex was down this weekend too, who I haven’t seen since he left for the Lake District (he kindly gave me a lift to my first lesson at GB Brum). I think he was taking it relatively easy, as we had a pleasantly relaxed roll. As with Christian I was in the guard, looking to attack. I played around with his lapel, wrapping it around his arm, then briefly considered trying to use it in a choke. That wasn’t going anywhere, but it did at least give me a bit of control.

I still need to watch my feet, as Alex went for a footlock, but fortunately I was able to grab his gi and step forward into it to free myself (though again, I don’t think he was going very hard, so might have been easing off anyway). That meant I could move through into side control. I noticed I had a leg by his armpit, so took the opportunity to wriggle into my favourite position from side control, the step-over triangle. Time ran out before I could do much with it, but it felt as if his head had some space, so he might well have slipped out. I was attacking to arm too, but again it felt like he had that covered, as I wasn’t getting it into the figure-four position I wanted.

Bradley was up next, which was a much more active spar, though it still felt flowing rather than lots of squishing and smashing. I was mostly under side control looking to spin free (thanks yet again to jnp’s ‘ ball technique’), concentrating on keeping my knees to my chest. That wasn’t entirely successful, as I kept finding I just had one knee up in time, but it did seem to help. At one point I found myself dangling from his head and shoulders as he sat up, but it wasn’t in the right place for a triangle. I’m not quite sure what I was doing, as I vaguely had an arm, without any real idea of how to capitalise.

Finally I rolled twice with a big white belt I recognise from the basics class. He’s polite and considerate, which is always good to see in someone who hasn’t been training long, even asking if his hand was hurting my back when he had it underneath at one point. I moved through to the top position a few times, getting into mount, but as ever not doing a whole lot from there. I moved through to a sort of technical mount a couple of times when he turned, but again couldn’t secure anything (I briefly tried to step into an armbar, but not tight enough). 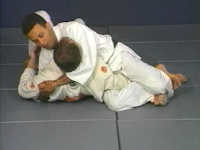 During the second roll, I went to guard, and tried first for a triangle, then an omoplata. I failed to get the right angle on the first, and couldn’t flatten him out on the second, so he was able to slip free. However, I was pleased that when we moved into scarf hold, I got the chance to use a technique I’d seen on Renzo’s DVD a while back. That’s because my partner’s arm was bent and hovering by my legs, so I could push it down, hook it with my leg, then raise my hips for an americana.

I’ll be training again on Tuesday, and possibly Monday or Wednesday, depending on if my girlfriend can make it for a visit next weekend. Otherwise I’ll be going for Saturday again. That problem I’ve been having with trains and buses should be resolved soon, as GB Brum is moving to a more central Birmingham location, near Five Ways train station. It will cost a bit more on the train, but they are much more regular to Birmingham, and I won’t have to change at Dorridge or Solihull for Acocks Green.