Didn’t make it back in time for the cinema, but I did get out Hiroshima, Mon Amour from the library (which strangely enough relates to my interest in AIDS and cancer in poetry) before training. So, should make for interesting viewing: I don’t know much about it, but that’s how I prefer to watch films. I’d be much happier in a world where trailers were just the title of the film, that didn’t tell you anything about it at all (though I guess that might make it a bit tough to work out whether you might like it or not. But hey).

Also, I see from Matt’s blog that my first ever BJJ instructor, Oli Geddes, has a few instructional clips up, such as this one on his infamous loop choke:

I’m looking forward to seeing what he pops up with next.

It was another basics class tonight, this time with Norby. His focus was on passing the guard, easily the weakest part of my game. We began by drilling the orthodox standing guard break, from the standard grip where you hold both their collars in one hand (straightening your arm to keep their back on the mat), then grab their sleeve with the other (make sure you aren’t too obvious, so don’t just stare at their arm before trying to grab it). Finally, the elbow of your sleeve-grabbing arm must be braced inside your knee: if it is outside, then you're vulnerable to an omoplata.

You can either step up your leg on the trapped sleeve side, or slide your double collar grip up towards their head, using that as a post to jump up to your feet. As you raise up, let go of the collars, thrust forwards with your hips, while simultaneously yanking up their sleeve. To finish, push their same side knee off your hips with your free hand (which is often easier said than done, but at least this puts you in a good position to do it).

Next, Norby went through a variation on the leg pin pass. Instead of just dropping your knee other and keeping your shin on their leg, drop your knee as close as you can to their ribs. Keep your foot hooked under their leg, so it raises it up slightly. You’re also going to bring your same side arm under their head, driving your shoulder into their neck.

From here, you can exert a great deal of pressure on their legs, stretching them out until they’re liable to give up the pass just to relieve the strain on their inner thighs. Even if they’re flexible enough to resist that, you’re in an excellent position to complete the leg pin pass as usual, swinging your free leg right over to the floor past their legs, then switching the other leg underneath to establish side control.

Sparring was guard passage, with the class split up into ones, twos and three. The chosen group stayed on the mat, trying to pass the guard of everyone else. I was in the first group, and stayed very defensive. I had the excuse of my busted up wrist, but still, I should have been much more proactive. It’s very easy to slip into a defensive posture, just maintaining my base or tucking my elbows to my knees, which isn’t really the idea.

Underneath, in my comfort zone, I was a little more active, although as my first partner was pretty big, I was still fairly defensive, waiting for them to make a move. I thought I was going to get passed in short order as a result, because in flinging my legs up for a triangle, I went too high and immediately got stacked. However, for some reason he didn’t continue to push through and pass as I’d expected, so that eventually gave me the chance to move to half guard, reverse him and pass through to side control.

I asked later, and it seems that they were concerned about that triangle attempt. I doubt very much he was in much danger had he pushed through to go for a pass, but it’s interesting that proved a sufficient distraction to stop them completing the motion. Of course, this is the basics class: no way would I get away with that against blues or higher. 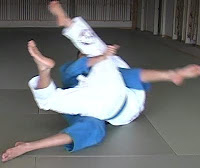 With somebody smaller, I was trying to be helpful, as they kept leaning forward when going to stand up, meaning it was a simple matter for me to pull in my legs and break their posture. I’m not sure if it is patronising to let them keep on making the same mistake and seeing if they correct it, or if perhaps I should have said something during the spar rather than after. It gave me a chance to practice the flower sweep, which I normally never get, but again, they were a good bit smaller than me, so it doesn’t really count.

I was reminded of reality again during an unsurprisingly brief specific spar with Norby. He easily opened my guard, then moved round to side control: I briefly tried to switch into butterfly guard, keeping my knees in tight, but too slow and without sufficient control.

A lot of people were trying to elbow dig to open the guard, which I really hate (also one of the reasons I like Saulo’s instructionals so much, as he targets plenty of scorn at that particular technique) . One of these days I’m going to have to spend a few hours drilling the triangle counter for that, as I still don’t have the timing down.