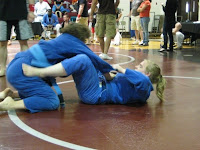 Thanks to injuries and cold feet, we ended up with one woman competing at US Grappling’s Dominion Grappling Championships on August 7, 2010. Rachel Prestipino took 2nd place in her white belt division, losing to a woman who was promoted to blue belt the following day. Rachel trained very hard for the tournament, and I’m really proud of her. I think this is her first time competing with women instead of teens (she just turned 16 this summer), and the first time she’s competed in about a year. I can’t wait to see how she does in her next event.

July brought several new women to class, which meant retooling lesson plans nearly every week. This is a great problem to have, and I’ve structured the August classes so that new women can jump right in. This month, we’re working from the closed guard. I’ll be introducing the women to passing, sweeping, and submitting from there so that they get a taste of both top and bottom games. I’m trying to incorporate both sides into the drills, but sometimes it means that we work the same basic position for two classes in a row. I actually like doing that, since it means that the students get more reps from a position and they spend less time practicing bad technique (like putting their hands on the mat so that their opponent can practice a kimura, for example).

I think it’s fairly common practice for the instructor to (kindly) submit students when they first start jiu jitsu. The problem comes in when I’m training with the teenagers. I don’t want to train so hard with them that they are too discouraged to return. I also don’t want to train so light with them that they think that jiu jitsu is easy or ineffective. I’m also a bit worried about the perception of the parents on the sidelines that don’t train, who are watching their children get beaten repeatedly by an adult. Being a teenage girl is hard enough without this sort of extra pressure, and I’m trying to find the right balance.

So far, my solution has been to reward good grappling choices and to “punish” bad ones, much like I would do if I were training a puppy. If the teenagers flail around under side control, the pressure slowly increases. If the teenagers attempt proper escapes, the escapes will work. I’m still working out if this is the best way to work with them or not, and I’d love some feedback from anyone that has trained teenage girls in the past. I don’t want to treat them like delicate flowers, but I also don’t think that treating them like a full-grown adult is the answer. 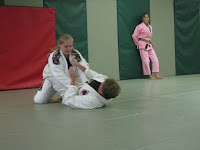 After August, I will start trying to get some of the newer women over into the co-ed classes. I think they’ll have enough of the basics to start trying things on a larger variety of opponents at that point. I also don’t want them to become too spoiled by always having sparring partners at their size and skill level. Plus, they need to find ways to adjust techniques for shorter and longer limbs and so on. If they’re always training with the same body types, they’ll never learn to make these small adjustments that will make their jiu jitsu more effective.

I’ll be spending a week at a women’s grappling camp in Toronto for the last week of August, and I hope to come back with some more ideas about developing the women’s program.