If anyone happens to have any interest in the Poetry and Medicine symposium I mentioned a while back, this is a video of me giving my paper. The main page for the symposium itself is here (scroll down a bit): there is going to be another one next year, which I’ll probably look to speak at again, as it was a great experience back in April.

Norby went through the same butterfly pass we just did in the basics, then added on a second butterfly pass. He said this one was his favourite, and I can see why as it looks like an effective technique. Again, they’ve sat up, ready to sweep with one knee raised and the other on the floor. They’ve grabbed your arm and are about to send you over.

With the hand of the arm they’re gripping, shove down onto their knee. Your other arm goes over their back. Put your knee against the knee they have raised up, then twist your knee inwards. This should collapse their knees together, and also drive your knee into the middle of their upper leg, which can be quite painful if you put any force into it.

Your grip will switch from their knee to the trousers of their top leg, shoving the fabric down to the floor to stop them moving their legs and hips. You’ll also be holding their upper body down with that grip on their back: with your knee into their leg, you’ve got a good base to keep your weight into them, driving it through your arms. Maintaining the pressure with your arms, walk your legs up behind them, moving to side control.

Specific sparring went just as badly as in the basics class, but this time, I was attempting to focus on sitting up when underneath. That meant I was able to vaguely flail at getting hooks, but perhaps wasn’t thinking enough about grips with my hands and arms. People weren’t having too much trouble moving past my legs, or sweeping me over when I was on top. Being small doesn’t help, but it definitely wasn’t just a size issue.

I could only think of two passes, neither of which I managed to progress. The starting position for specific sparring was again on top with my head down and elbows in. I tried pulling out their lapel and tucking it round, but couldn’t seem to get the lapel loose before they already were well into their sweep. Alternatively, I was looking to bring my leg back and trap a shin against my knee. Must have been missing a bunch of steps, as against blues and up, their hook was generally stopping me, while with whites I could at least get the leg trapped, but then failed to progress round to the side properly. 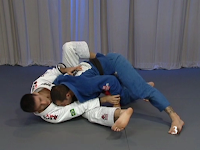 Another option, once you've brought your knee across, is to drop back. Bring the knee behind their arm and your leg over their back, swinging your other leg by their neck. From there, you can tighten up into a triangle choke. You can also jump rather than drop back, depending on how comfortable you feel with the technique. It reminded me a little of Demian Maia's triangle attacks, although he doesn't show one specifically from here.

Free sparring fell into familiar underneath side control territory with the two blue belts I rolled with, staying tight and looking to keep my knees in tight to avoid submissions. I was able to stay safe, but on the other hand, but my opponents were bigger and taking it pretty easy. One of them had a choke on, but they must have eased off or something, as I don’t think my defence was doing all that much to prevent them finishing.

I also had a roll with a green belt, so that gave me a chance to work lightly on top, and let him try stuff, while also attempting to distribute my weight and see if I could maintain the position. Made a nice change from getting smashed. ;)

Next week will be my last class at GB Brum (I plan to do another double on the Monday), so I must remember to cancel my direct debit: need to give Norby a ring tomorrow morning.
slideyfoot at 20:30
Share