Last week, Romulo spoke with me about competition. In part three, he talks about spider guard and the scourge of elite competitors, injuries.

slideyfoot.com: Speaking of spider guard, it can often cause a lot of strain on your fingers. Do you have any tips on how to toughen them up, or specific grips that you use to minimise damage?

Romulo Barral: That’s a funny thing, a lot of people ask me that, because they see I play spider guard for a long time. I answer this question a couple of times, you know, “I do pull ups with the gi, I climb the rope.” All this, it helps you develop a strong grip. But, for the real thing – I think I have really strong grips, my fingers are really strong, and then I develop this – it’s like, play spider guard.

I realise this when I started to teach, because when I teach spider guard, when I travel and do seminars, I get people to do spider guard drills, for one minute. Hold the sleeve, and then do simple drills. Like eighty five percent of the people, after a minute, they have weakness on the grips, on the fingers, the forearms, this type of thing, you know. They’re not used to holding a grip for more than a few seconds.

It’s because when you climb a rope, you climb the rope to the top, in maybe ten seconds, twenty seconds. When you do pull ups with the gi, you do ten reps, or fifteen, or twenty. So it’s like, thirty seconds. When you play spider guard, sometimes you need to play for ten minutes. That’s what makes your grip strong.

slideyfoot.com: So it’s just a matter of doing it more and building the endurance, there’s not any particular route other than time?

slideyfoot.com: You’ve had a number of injuries in your competition career, most recently on your knee: do you have any tips for recovery?

Then in another way, you know what? I have injuries because I train really hard. I never give time to my body, to heal up after small injuries. So, if I have small injuries, I don’t let my body heal, then I become a big injury. But that’s the price you pay, to become good. Everybody good, top athletes, they have the same problem. I guess, it’s really hard to become a top athlete without getting injured

slideyfoot.com: Do you try to train around your injuries? Like say you’ve hurt one hand, so you just train with one hand, or would you stay off the mat completely?

Romulo Barral: I had surgery in my shoulder, 2008, and then I had a little complication in my surgery, the doctors, they stretch my nerves. I was not able to move my arm for six months, but I step on the mat one month after my surgery. I start to do my training with one arm, doing drills. Then in two or three months, I was training full power, with one arm.

I train with the one arm, I think, for almost a year, you know? Then a funny thing: 2008, for the Worlds, I came here to train at the Gracie Barra, just to train, to watch the Worlds, at Gracie Barra headquarters. Then I was training with one arm, with a lot of black belts. Master Carlos Gracie Jr – I don’t know if he was joking or if he was serious – he came to me, and then he told me, “Hey Romulo, I think you should compete with one arm.” 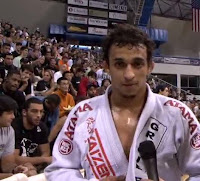 He say, “No, I think you compete with one arm, you can win this thing, you can make history.” [laughs]

It was very funny, you know, to hear that from him, but of course, I was not gonna go compete, because in training, it’s different. Nobody was going to pull my arm, nobody was going hard. In the tournament, people would go for my injured arm, pull, do something like that, and then go full power. So I don’t think it would be fun. But it was good to hear this from him.

I was training really hard, to try to improve my game, even without one arm, and then I improve a lot, you know. My right shoulder hurt, so I improved a lot on my left side. Right now, it’s kinda a little bit hard, because it’s my knee. It’s different, but very soon I’m going to start doing specific training. I’m going to wrap my knee, without move, maybe do like side control specific training, back specific, make people attack me, so I can get as soon as possible on the mat and start my training again.

In the next instalment, Romulo talks about BJJ in the UK, online training and his favourites DVDs. For part one of this five part series, click here, and here for part two. To read more about Romulo, check out RomuloBarral.com, and you can also follow him on Facebook and Twitter