Also, you may have heard of Hillary Williams' charity gi drive. If you aren't in a position to send her a gi, there is now an option to donate directly through PayPal: Seymour from Meerkatsu linked this on Facebook a little while ago, so check it out to help a worthy cause.

Tonight is the second time I’ve had a chance to attend a class by Sahid, who normally covers when Kev isn’t able to make it due to work. Technique started with the guard pass from Tuesday, where Sahid made the point that you should use your skeletal structure rather than muscle, stiff-arming into their solar plexus. He also mentioned something I’ve heard other people say, which is to avoid looking down: keep your eyes straight ahead. Technique from the bottom was a standard flower sweep.

I was determined to concentrate during sparring, as I feel like I’ve been slipping over the last couple of months, in terms of focusing intently on technical detail. As I was going to be hanging around for another hour tonight, this was a good opportunity to get back on track.

I want to think again about what positions I’m ending up in, what tends to happen when I get there, and what techniques might be worth attempting. As per Kev’s private lesson, I want to get back into practicing the twisting guard break when I’m on top in guard, and also keep in mind the principles he mentioned for when they open their guard (especially moving back then doing a big step over one leg).

Underneath in guard, I’d like to be considering simple sweeps (like the windscreen wiper Ciaran showed me, flower and scissor/push), and also keep butterfly guard in mind. The underhook I was working in previous months would be good to continue playing with too.

As ever I’m normally in side control a lot of the time, so I plan to keep trying to go to my knees, as well as attempting side control escapes I saw during my time at Gracie Barra Birmingham (e.g., pushing on the back of their armpit, punching through to make space, basic stuff on pressing a forearm into their neck etc), which also combines with scarf hold escapes.

When it actually came to specific sparring, I had a chance to put some of that into action, particularly as I did hang around for the additional hour (which stayed with specific, rather than going to free sparring). It was from the guard, so on top I was trying to work the twisting guard pass. When I got to standing, I’m still tending to end up bent forward, so I need to drive my hips rather than pushing on the double collar grip. As I was with white belts, I was able to drive the leg to floor and step through, then slide for the pass, but that wouldn’t have worked against anybody more experienced. However, it was useful for helping me to ingrain the habit from Kev’s private lesson.

I also had a chance to follow Colin’s suggestion from the throwdown earlier this year, grabbing their sleeve if they grab your collar. You then immediately stand up to begin the pass, having already got control of their arm. I was able to shake my partner’s guard open and pass, but again, this was a white belt who I think had only been training a couple of weeks by that point.

Underneath, I was using too much arm strength to hold their head down, or reaching over the back. It does keep them in tight, but with anyone bigger, that’s never going to work. Even with somebody who isn’t too much larger than me, it drains a fair bit of energy. I’m still looking for triangle, but generally telegraphing my intention of getting around their arm too much. I almost got into position at one point, but left too much space, so he was able to drive his arm back through.

I also did manage to try out the windscreen wiper sweep, but without too much success. I think I forgot to shift over towards their arm, which I must remember to do if I find myself in position again. There were a number of times when I thought I might have been able to move round to take the back, but I didn’t get onto my side quick enough, or get sufficiently tight control on their arm (as Kev taught us a while back, based on what he saw at an earlier seminar with Roger Gracie).

Specific from side control was with Trev, so that was a lot more difficult. Trev is now a blue, and also presents an interesting challenge due to his long, flexible legs. On top of side control, I was trying to stay tight and gradually kill the near elbow, but eventually got tangled in those legs. The first time he managed to hook my arm from seemingly nowhere, while the second time I’m not even sure how I got reversed.

Underneath was a bit more familiar, although I had trouble making much space under Trev’s solid control. I could try that punch through Norby showed, although I’d have to be very careful I didn’t end up losing the space of my elbow. I got to my knees at one point, although I’m not sure how secure the position was because we stopped before Trev might have been able to secure the back. 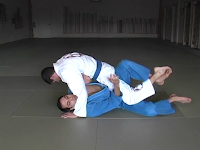 Class finished up with some specific from mount, where I again was with a white belt. Underneath I was generally able to shrimp to half guard then full, and had another opportunity to use Rob Stevens nifty escape (although re-reading my earlier post, I’d forgotten you’re supposed to end up in deep half guard: I just went to normal half guard and worked to full from there).

On top meant a bit more practice for my grapevined low mount, though I was surprised I could resist his bridges mainly by posting with my head: most likely he just didn’t have that much experience getting a full upa and going over the shoulder or something. Also nice to finally land an americana from mount, but again, that is probably due to the experience gap.

I need to try and make sure I keep doing the full 2 hours on Thursdays, so I can keep on working those specific goals (although I’ll be off for an extended visit to my gf in about a week).
slideyfoot at 21:00
Share