My gf is still looking for a place to buy in Bristol, so I haven't yet moved down permanently, but I did get some time free for BJJ this Sunday. A friend of ours was getting married in Bath on Friday, so I brought along a gi (dropping it off in Bristol before we headed to the wedding). That meant I was ready for the sparring class at Gracie Barra Bristol a couple of days later. 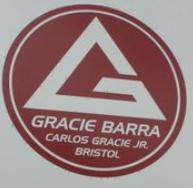 The gym is located in the Redfield area of Bristol, and has a train station not too far away at Lawrence Hill. The full address is:

You shouldn't have too many problems finding it, as there is a huge 'Gracie Barra Bristol' sign on the fence, then another one by the entrance, so it is immediately obvious this is a Brazilian jiu jitsu academy. A fellow BJJer was waiting outside when my gf dropped me off, and Geeza himself drove up shortly afterwards.

At the moment, the club is housed in a building on the left, up some stairs. However, Geeza also owns a large warehouse on the right, which he showed me inside. It's big, but the plan is to double the size by extending out into the car park. Once that is finished, the mat space is going to be enormous, purpose built for BJJ (there aren't currently plans to bring in MMA or anything like that, as Geeza wants to focus on teaching jiu jitsu). Apparently construction work starts tomorrow.

The smaller building will still be used once the main BJJ gym is built, possibly for kids' classes, or just so that two classes can run concurrently. This acts as a mini-version of what the eventual Gracie Barra Bristol gym is going to look like, fully equipped with permanently installed high quality mats. They are absolutely beautiful: without any doubt, the most comfortable I've ever rolled on. I think Geeza said they were from Zebra Mats, and even have a fifteen year guarantee. The same type of mats will be used in the main club, so it is definitely going to be a pleasant experience drilling and sparring in there.

I had been expecting a small class, with maybe a few white belts, as the school is still only a few weeks old. However, there were a good number of blue belts, along with a purple. The whites also ranged from one to four stripes, so some of them must have been training a fair while. Geeza soon helped me feel right at home, making a point of introducing me to people, then announcing who I was and where I trained BJJ at the start of class.

There were around fourteen people on the mats, with a reasonable range of size and experience: no women yet, but they might train earlier in the week. If not, it is early days yet, so hopefully female BJJers will begin to sign up in time (not to mention this isn't unusual: Gracie Barra Birmingham and the Roger Gracie Academy HQ are the only two Brazilian jiu jitsu clubs I've trained at so far where there was almost always at least one woman on the mat). There are a number of smaller guys there, so women looking to join will definitely have somebody roughly in their size range to roll with (and the 65kgs of yours truly should be there regularly in the not-too-distant future, depending on house hunting).

Geeza is working hard to make the school a friendly place to train, with a relaxed atmosphere. You can see that in the way he was so welcoming to a stranger like me, and also touches like laid-back music while we warmed up and then during sparring. From the sound of things, meatheads will be actively discouraged: the goal is a BJJ gym where people can feel safe, rather than a battleground strewn with hyper-extended elbows and busted up knees.

After the warm up, Geeza had everyone line up by the wall and then picked who was going to spar. This is something Kev occasionally does for the sparring class at his club too, and is useful for getting a good range of rolling partners. For the last roll, we picked our own partners. There was also no problem with sitting out and having a rest if you wanted, which is something I appreciate.

I had five rolls over the course of the hour and a half class: Geeza asked to roll for the first round, which was a nice gesture, as it is always cool to roll with experienced guys like him. As a four stripe brown, he obviously didn't have any problem doing what he wanted with me, and had plenty of useful tips.

When on top and looking to pass, he suggested that I should try to treat the side they have the strongest grip as a sort of hinge: otherwise I may well be walking into a sweep, which is exactly what happened just before. He also noted that if I'm looking to escape a triangle, I should aim to drive the knee on my trapped arm side to their face, which was helpful: I had been framing and stacking, but at best that is a delaying tactic.

I was looking to work on butterfly guard throughout, trying to get an overhook belt grip with my same side hand holding their knee when they had me flattened out. While I could manage that, bringing my knees in and then straightening out my legs in order to sit up proved more difficult. Something to work on, along with the numerous techniques I learned at Gracie Barra Birmingham (particularly Chiu's tips on reaching around their back to their other armpit and keeping your chest low, which I also attempted).

Other techniques I was looking to apply were blocking their shoulder and arm as they pass, where I need to shrimp more, and also adjust more quickly if they decide to switch sides. I had plenty of opportunity for that, as I'm still not being careful enough in butterfly: getting a grip on the trouser leg seems to help prevent them switching around to the side, but it isn't something I'm too used to yet (there was a good segment on it in an Andre Galvao DVD I watched recently, which as ever I'll review at some point – quite a long 'to do' list on that score, though!)

Underneath side control, I continue to struggle with that escape where you stiff arm into their armpit and sit up. It could be that I should be thinking about their elbow more, or I'm starting off too flat and high on their body. Either way, I can remember this cropping up at GB Brum, and it's also on a Braulio instructional.

At another point, I was able to get into north south and look for the kimura, but couldn't dislodge their locked arms. I'm also not sure if I'm being overly mean by sitting on the head in that position (which can't be very pleasant for the person under there). I could perhaps try to rest on my knees a bit more, while still maintaining enough pressure for control. I slid into a side control triangle, but couldn't quite get the angle I wanted.

At the end of class, Geeza gave a brief talk about respect, which fits with what he said to me earlier: always worth emphasising that you should treat your training partners with care. While waiting for my gf to give me a lift back, I had a good chat with Geeza about his plans for the club. Suffice to say, it sounds like Gracie Barra Bristol is going to be an increasingly amazing place to train: great stuff on the way, judging by that conversation.

I also got into a discussion with one of the white belts I'd rolled with earlier. Surprisingly enough, he showed some interest when I mentioned my academic background in poetry: not often I get to babble about that with people (at least not without their eyes soon glazing over).

Speaking of poetry, I taught another poetry seminar last Thursday, on two of my favourite poets, Robert Lowell and Sylvia Plath. They manage the rare combination of writing personal poetry while actually having led interesting lives. One of the things I find most annoying about a lot of contemporary poetry is the subject matter is frequently dull, discussing some very conventional experience in a very conventional way.

That doesn't tend to happen with Lowell and Plath, given that one was a manic-depressive who used to write letters to Presidents addressing them as equals (with good reason: the Lowell family was essentially part of the American aristocracy), while the other built up an intense mythology about herself which went into overdrive after her suicide (like so much of her biography, the circumstances of her death remain controversial, if you go by Al Alvarez's famous account in The Savage God).

Anyway, that was good fun, and one guy even recorded it, so hopefully I'll be able to get him to email me the audio. I also had some poetry reviews published in print: should be some more in the future. I'll be teaching another seminar (which I've taught a few times before) in December, on two more poets I like, Thom Gunn and Peter Reading.

I'm looking forward to training at Gracie Barra Bristol again. I might get a chance the Wednesday or Friday after next (there are classes at 7pm most weekdays), depending on what my gf is doing, so that should be good. I'm interested to see what a normal class is like, in terms of how the technical instruction is structured. If you're in that area of Bristol and looking to train BJJ, it would be cool to see you there. :D
slideyfoot at 13:30
Share