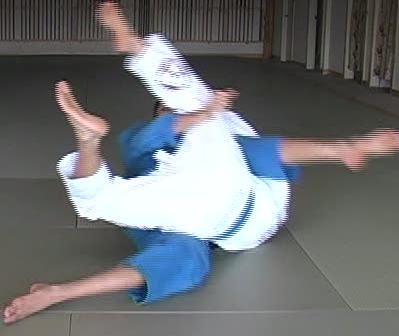 Sahid was taking class again tonight, and after starting off with a takedown, he moved on to the flower sweep. His set up was a little different to what I'm used to, and started off in closed guard. They have the typical grip, with one hand on your collars, the other back by your hip. Swim your arms through and back towards you to knock their arms off (easier said than done, depending on their grip), bringing them forwards with your knees. Reach around their back and clasp your hands together in a gable grip, locking them to your body.

Next, release the top hand (using the other to keep control of their head), then bring it out and under their arm, so that you can put it by their head. Reclasp your hands in a gable grip: Sahid recommended having the higher hand thumb down, for a stronger hold). Straighten your legs and move your hips out to the side (in the direction of your upper arm).

Relock your legs, then lean back slightly, nudging their arm with your shoulder. Your aim is to push their arm under their head or body. If they don't react, you can move to take their back. More likely, they will try to square back up, which is what you want. You've now got them locked against your torso, with their arm trapped underneath them. As before, release your gable grip, switching the upper arm to grab around their far armpit instead.

Your other arm either threads under their same side leg, or grabs the same side trouser leg, by the knee. Open your guard and kick through, so that the leg on the trouser grip side whacks into their armpit, while the other chops through. You can also lift with the arm gripping their trouser leg/under their leg, rolling through to mount.

If that all seems a bit complicated, you could also try the simpler version Callum mentioned. Grab their sleeve, then grab their knee on the other side. From here, kick through as before to get the flower sweep: you'll be using that grip on the sleeve to stop them posting out. However, it is of course more difficult to break their posture from here than in the previous variation, where you've already got them bent forwards and locked close to your torso.

Alternatively, you can use Sahid's set-up to go for an armbar. You being as above, until you get to the point where you're gripping their far armpit. Instead of going for the sweep, walk your legs up high, until you can bring a leg over their shoulder, on their trapped arm side. That means you're now in a position that looks a little like Eddie Bravo's pleasantly named 'crack head control', except that you aren't grabbing your own leg (p150 of Mastering the Rubber Guard). From here, you just push the head to get your leg from their shoulder to over their head, and go for the armbar. The flower sweep is still an option from here too.

In specific sparring, I as ever need to be more proactive in guard, particularly with chokes. I'm still using them as more of a threat, rather than following through. That's probably because I don't have any confidence in actually landing them, so something to work on: that should also make them a more effective distraction, so I can then look at attacking arms, securing overhooks or even trying Shawn Williams guard again (I had a go, but didn't isolate Callum's arm properly, so it wasn't doing a whole lot).

I also need to watch my arm when they stand up. I wanted to go for my favoured handstand sweep to star sweep combination, but that doesn't function properly if they've managed to grab your other arm. Callum doesn't grab the arm initially, instead standing up with a hand on the hip: he grips it as he stands, so something I need to pay more attention to next time.

When I was on top, I was trying to drive my hips forward when he went to open guard, and see if I could grab a leg and pull up. I'm still not standing when I should, but Callum tends to go to open guard anyway, so that forced me to get off my knees. I also got into the dreaded z-guard type thing, with that frustrating knee. I tried switching to pushing on the knee...but left an arm behind for Callum to kimura.

We also chatted some more about Callum's magazine and his plans: if you haven't already 'liked' the Facebook page for Jiu Jitsu Style, check it out here for the latest news. There's also an interview I did with him on the topic, for the FightWorks Podcast (text rather than audio).
slideyfoot at 20:30
Share