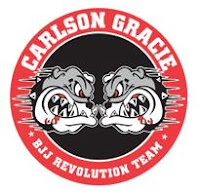 Even more generously, Dickie also allowed me to take part in the seminar itself. I won't be writing up the exact details of what was taught, as understandably Carlson Jr didn't want them distributed on the internet. Still, I can say that he runs an excellent seminar, with a sequence of connected techniques, building through 'what if' scenarios, adding in submissions and a series of variations. So if you get the chance to go next year, I'd highly recommend it.

The new premises for Carlson Gracie London are very impressive: they're still developing the site, so although there is already a sizeable mat space downstairs, it is due to get much, much bigger when they expand into the huge room next door. Filling up the current space, there was an enormous turnout for the seminar, with a range of belts. There were also a few women present, both white and blue belts, which is always good to see.

Getting to the club is easy, as it is a short walk from Ravenscourt Park tube station on the district line (took me about 30 minutes from Marylebone: down the Bakerloo to Piccadilly Circus, then Piccadilly line to Hammersmith, and finally a short hop on the district to Ravenscourt Park). Turn left out of the station, head to King St and turn right. You'll eventually see the Carlson Gracie logo on both a sign outside and the entrance, along with a banner visible through the window. The club is directly opposite a Tesco Express.

So, many thanks to Dickie for setting up the interview and allowing me to take part, and to Carlson Jr for agreeing to speak with me for Jiu Jitsu Style, and of course Callum for bringing me along. Congratulations to everyone who was promoted, and thanks also to my training partners at the seminar, two friendly, helpful white belts. They gave me a number of useful technical pointers while we were drilling, regarding grips, angles and the like. I felt very privileged to be able to attend.

Update July 2011: My interview with Carlson Jr can be found in Jiu Jitsu Style issue three, while the seminar write-up by Callum is in issue one. Easiest way to get access is digitally through iTunes.