Short Review: According to Datsusara, their new gi benefits from the properties of hemp, which is allegedly anti-microbial, super strong, breathable and wears in with each wash rather than wears out. Of those, I can definitely confirm the last, as this is the most comfortable gi fabric I've ever worn. Another point in its favour, from my perspective, is the lack of bling.

However, the unbleached colour and very baggy jacket may not appeal to everyone, though it does also come in black. There were also a lot of loose threads, which is a serious problem: Datsusara stated they are looking to rectify the issue. Presumably due to the difficulties of manufacturing hemp, the gi isn't cheap, at $140. Available to buy here. 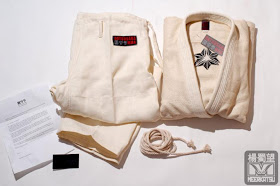 Full Review: Thanks to Seymour at Meerkatsu, a Datsusara hemp gi arrived at my house a couple of weeks ago. Meerkatsu is the place to go for gi reviews, but results in Seymour being incredibly busy: hence why he passed this one along to me. I also get to benefit from his photography skills, which is awesome. That means that rather than solely relying on my camera phone, I can put up some professional snaps (as always, click on the picture for the full size image).

As I've written numerous times in the past, I like my gis to be as plain as possible. On that score, Datsusara delivers: there is an embroidered logo on the back and the arm, along with a small patch on the trousers, but that is it. In my opinion, the logo - representing hemp - is also quite appealing, in an unobtrusive Japanese mon style, with no written text (something I find off-putting about many other gis). The back logo could possibly be placed higher, for those of you who want to add a team patch, but as I never add patches it wasn't a concern in my case. 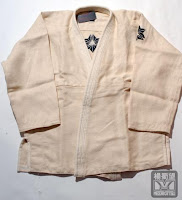 In addition, this is without any doubt the most comfortable gi material I've ever worn. When I first tried on the jacket, it felt like a high quality dressing gown. The cut feels comparable to my judogi, in that it is loose and baggy with wide sleeves. Seymour told me that it used to be even larger, but there was a lot of shrinkage after he washed it twice (at 60 and 40 degrees Celsius respectively). I would advise that if you like a tighter fit, it would be sensible to go for the size below your normal gi. I haven't yet tried throwing it in the tumble drier for further shrinkage, but may give that a go during my next visit to my parents.

When I first wore the gi, that bagginess was noticeable during shrimping, as the collar bunched up uncomfortably behind my neck. However, that problem seems to have disappeared by the time I wore it for a sparring class. Either I've gotten used it, or it has shrunk a little after I washed it (on the quick thirty minute setting). In the accompanying letter Datsusara sent Seymour with the gi, it says that it will shrink up to 5% in the wash (something of an understatement, judging by Seymour's stats, which I've included towards the bottom of the review). It also recommended washing it at least twice: at the time of writing, it's been washed three times.

A more serious issue is the stitching. I was surprised by how many loose threads there were, to the extent that the trousers look as if they've been ripped in several places after years of training, when in fact they're brand new. It isn't difficult to remedy, as I sewed up the four most noticeable areas, but this definitely needs to be sorted out for the next batch. Although I should note that in that letter, they do acknowledge the problem. To quote: "If you find loose threads please simply cut or cut and burn the ends, we apologize for the sloppy stitching but we are working on it."

The natural unbleached colour takes a bit of getting used to, but it is relatively unassuming. The only reaction I got was that one training partner asked if it was an old gi which had faded from heavy use. My girlfriend, on the other hand, said it looked like the gi had been drenched in tea. I've heard that unbleached used to be quite common back in the day, the most famous probably being the HCK unbleached single. It has fallen out of favour more recently, but perhaps Datsusara will be part of a general return to that classic look. I prefer white, but then the lack of bleaching does make for a stronger fabric. Given that considerable advantage, I'm sure I could get used to it. 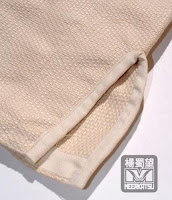 Feedback elsewhere on the internet has been largely positive, such as on The Underground and Georgette's thorough review (she mentions she wore the gi to sixty classes at the time of writing). Over on Sherdog, company head Chris Odell actively engages with customers. He also directly adresses their concerns, such as this response on the widespread stitching deficiencies:

"Sorry again for the loose threads on some gis. I talked to my manufacturer and they said they had rushed many of the units to make our deadline, hence were sloppy on a few. I am taking steps to make sure that doesn't happen again: if anyone has threads that cause the gi to lose structural integrity we'll fix it for you, just email us."

In terms of the lint problem noted by wearers of the black edition, Odell responded that "from what I have gathered, that stops after two cold water washes and low heat drying," which is supported by the experiences others relate in the same thread. It doesn't appear to be a problem with the unbleached version. 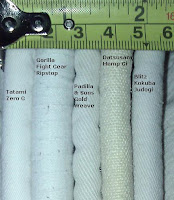 The unique selling point of the gi is that it is made entirely out of hemp, rather than the usual cotton. Datsusara are the first company to successfully market and sell a hundred percent hemp gi. Other companies have tried, but have either got stuck in the marketing phase waiting to get production off the ground (like The Green Gi), or sold a product but then folded (like EnviroGi). Datsusara have been selling various equipment made of hemp for some time now: perhaps unsurprisingly, the website makes a lot of claims regarding the benefits of hemp. Some of them I can easily confirm, such as that the material is light and comfortable. Others require a bit more research: I'm not a scientist, but I can at least have a look at what sources are available on the internet.

In the 'why hemp' section of the official website, it says hemp is four times stronger than cotton, anti-microbial (bacteria, mold and fungus supposedly can't live in it), green (readily renewable, uses limited water during the cultivation process) and porous (meaning it breathes well and dries more quickly: mine took around a day to dry fully). The website also states that the fabric will wear in rather than out, increasing in comfort while retaining strength with each wash. 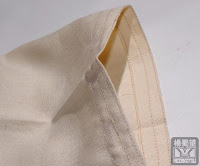 The first thing you'll most likely hear when you mention you're wearing a hemp gi is a tongue-in-cheek "can you smoke it?" I've never looked into the issue much until now, but according to Dr David P. West (admittedly a biased source, as his article was produced for the North American Industrial Hemp Council), hemp and marijuana are quite different. Marijuana is high in the psychoactive ingredient delta 9-tetrahydro-cannabinol (THC), while industrial hemp is not: it is theoretically possible to distill THC from hemp, but it would be a very expensive and time-consuming process. He also runs through the various advantages of hemp, which ties in with Datsusara's claims.

The position laid out by West is corroborated by this 2001 piece in The Guardian, by Dr Claire Cockcroft from the Institute of Biotechnology in Cambridge. Here is another piece, although again from over a decade ago, which looks fairly objective.

To finish with some gi statistics,

The jacket is a one piece construction, made from a 17oz (580gsm) long fiber weave. According to the shrinkage numbers Seymour emailed, the width across the sleeves ('A' in Seymour's handy gi diagram) shrunk from 165cm to 153cm, after a wash at sixty and then forty degrees Celsius. The length from the shoulder to the bottom of the jacket ('B' on the diagram) began at 80cm, then dropped down to 74cm after the washes. The width across the bottom of the jacket ('C') was 63cm out of the box, going down to 56cm after washing. Seymour noted that during his tests, the jacket weighed 1.36kg.

Similarly, the trousers are made from 11oz (370gsm) long fiber weave. There is the option of either the default flat drawstring, or a thicker rope version, included separately with gi. Shrinkage on the length of the leg ('E' on Seymour's diagram) was from 104cm to 93cm, while the width of the trousers legs ('F) went from 55cm to 52cm. The bottom of the leg width started at 25cm and went down to 24cm, then finally measurement 'H' shrunk from 43cm to 39cm. Seymour stated that when he weighed the trousers, they came out at 0.66kg.

The $140 price tag on the site is more than I would normally pay for a gi. It is also set to rise in the next batch, from what I've read. Then again, should hemp live up to the strength and durability touted on the website, that may well prove to be a good investment. If Datsusara can solve the stitching problem, this could become a serious competitor on the gi market. It will be interesting to see what happens with the next batch. Available to buy here.