Often in attempting to prevent a pass, you may find you can snatch half guard. The reason it's called half guard is because instead of having your legs wrapped around their hips, you've only managed to trap one leg. Generally, you'll have your inside leg over their back of their knee, locking that in place by bringing the back of your outside knee over your inside shin. If you can get your outside knee to their hip while still having your feet locked, even better, but that can be difficult if you have short legs like me.

There are plenty of options from half guard (some top competitors base their entire game around it, like Oli Geddes), though personally I try to avoid going there intentionally. The reason for that is because in half guard, you're pretty much even with your opponent. You can go for submissions and sweeps, but they can go for submissions too, as well as pass.

However, if you do end up there, your first concern is to stop them flattening you out and starting their pass. They are generally going to want to establish an underhook on their trapped leg side, using the other arm to control under your head. In many ways, it is a similar position to standard side control. That will enable them to crush you to the mat, then exert lots of shoulder pressure to kill your mobility. Many of the same attacks from side control can also be viable from here, like an americana.

Naturally, you don't want them to reach that dominant position. Your goal is to get up on your side, with your own underhook around their back, on your trapped leg side. That is one of the main fights you'll have in half guard, so it is essential that you get used to working for that underhook.

If you can get the underhook, that accomplishes two things. First, it prevents them crushing their chest into yours, which would help them flatten you out. Second, it means you can press into their armpit to help disrupt their base, as well as help you get up onto your side. You can use your knee knocking into their bum at the same time to help with this too, as that should bump them forward.

After you've got the underhook and onto your side, you want to block their arms. Five years ago, Indrek Reiland put together an awesome video (made even more awesome by being free) about the fundamentals of half guard. The main principle I use from Reiland is what he calls the 'paw'.

By that, he means hooking your hand around their bicep, just above the elbow. You aren't gripping with your thumb: this is just a block, to prevent them getting a cross-face. Reiland emphasises that preventing that cross-face is the main principle. Therefore, if you can feel they are about to remove your paw, swim the underhooking hand through to replace your first paw with a second.

If you do that, make sure you don't leave space under your elbow, or as Reiland demonstrates, they can they go for an attack. Similarly, if they manage to beat your underhook, you're going to bring that arm over for what Reiland calls the 'double paw.' From there, you can work for the underhook again.

Saulo does something similar in Jiu Jitsu Revolution 1, as he also uses the 'paw'. However, the posture of his other arm is different, and very simple. He just puts it by his side, with the hand reaching over to his opposite hip. He then uses the shoulder and elbow to wriggle towards the underhook, where he notes to grip by the belt rather than high on the back.

An alternative option is to put your hand on your head, then curl in tight to their leg. Again, that stops them getting the underhook. If you can get to their leg, it becomes difficult for them to dig your head free. Should the opportunity present itself from any of those positions, you can momentarily move your paw to their knee. Push on their knee and slide your knee through. From there, you can work to recover full guard. 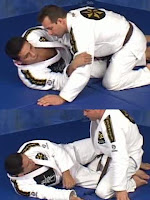 I'd forgotten until I rewatched it, but Reiland's video is also handy for me as instructor, because he includes some drills. The first one is simply working from that starting position, just trying to block their arm and maintain the underhook. The top person is looking to flatten them out, the bottom person is looking to keep them away.

Another approach to half guard is the one touted in Eddie Bravo's Mastering the Rubber Guard. I tend to warn beginners off Bravo's 10th Planet system, because it is all too common for newbies to think that the rubber guard is some kind of magic bullet for BJJ. It isn't. Bravo is a black belt under Jean Jacques Machado, so like Bravo, you need to get a solid grasp of the fundamentals before you can start playing around with more esoteric variations.

Having said that, it is worth taking a look at the half guard techniques Bravo includes at the start of Mastering the Rubber Guard. This is based around what Bravo calls the 'lockdown', which as far as I'm aware is an old judo position (then again, old judoka would likely tell you that's true of everything in BJJ ;p). The two major problems with the lockdown are that it is often used to stall and it immobilises your hips.

However, it can be useful for disrupting an opponent's base. It also works as a last ditch effort to stop them crushing you when they've got you flat on your back. It is a little different to the standard half guard leg position. Instead, step your outside leg over theirs. Next, bring your inside leg over your other foot (which will then hook around that inside leg), hooking underneath their shin. From there, you can stretch out their leg.

Bravo lays out a careful roadmap of where to go from the lockdown, detailing another method for getting up onto your side. He calls the first part the 'Jaws of Life', which is basically getting both your hands in front of their face, bracing them against the side of their head, near the temple. The idea is to create enough space to slide your arms past theirs, then establish a double underhook around their back.

You can then do what Bravo calls a 'whip up'. Release your double underhook and switch to pressing your hands into their ribs. In one motion, bring your knees towards your chest and push with your hands. In the space that creates, immediately shift to your side and come up on your elbow.

Once you've got onto your side and reached for an underhook, remember to block their arm from cross-facing, or you'll be back where you started (Bravo's alternative is to re-establish the linked grip around the back, then go for a sweep). As in Reiland's method, simply hook your hand over the wrist. From here, you can recover full guard.

For all the methods I've described, you can then use this option Kev taught me for recovering full guard. Unlock your feet, using your outside leg as a base for your shrimp. Your inside leg will slip around the back of their knee, in order to maintain control (otherwise they can just move their leg over and pass). Shrimp until you’re able to get that outside foot onto their same side hip. Push, then slide your other leg through to move back into full guard, or possibly butterfly guard.