As usual when I write about drop-ins, I'm going to talk about my holiday a bit first. If you want to skip straight to the training, click here

My gf and I headed down to Dorset for the bank holiday weekend, to go visit a friend we first met in Canada way back in 2002. She's now married to an English guy, so it's been cool to have her within easy reach in the UK, rather than the considerably less easy reach of Nova Scotia. That also meant we could enjoy her breakfast special, Eggs Benedict, which I don't think I've had before. Calorific! :D

Her recommendation was to check out Brownsea Island, which we duly did the next day. That sits in Poole Harbour, which apparently is the second largest natural harbour in the world (after Sydney, Australia). There are red squirrels painted all over the boats that take you out there, because Brownsea hasn't yet been overrun by their grey cousins. Unfortunately we didn't see any, but Brownsea does make for a pleasant walk regardless. Expensive though, as the ferry is £9, then you pay a further £5.80 to be allowed onto the island, which is owned by the ever-pricey National Trust. 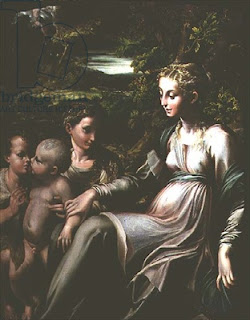 Outside of the National Trust is pricey too, as we found at Wilton House the day before: £14 entry. I didn't know much about it, except that Wilton House is the place where they filmed the end credits for Blackadder II, along with the brilliant 'Bob' episode (which I often forget is actually called 'Bells'). It turns out that Wilton House has an incredible art collection, stuffed with lots of Van Dyck, who is joined by a host of significant painters. Among others, you'll be treated to Rembrandt, Mabuse, a pair of younger Brueghels and even 'Madonna and Child with Saints Catherine and John' by my personal favourite, Mannerist painter Parmigianino (if you didn't already know, you can thank him for my blog background).

We spent most of the following week in Weymouth, which rather excellently had a fireworks display for no obvious reason (my gf loves fireworks). I finished off Tuesday by heading to see the new Conan the Barbarian film: my expectations were pretty low. As the Arnie version of Conan is my favourite live action film of all time (I'm a big fan of animation, hence why the original Conan doesn't top my personal fave film list), this remake was never going to live up to it. I'm also a big fan of the Conan comics, and to a lesser extent the original Robert E. Howard stories.

To summarise the new version of Conan the Barbarian, imagine an episode of Hercules: The Legendary Journeys, but without Kevin Sorbo or any of the humour. I loved Hercules, so that means I did enjoy 2011 Conan, if only in a brainless sword-swinging kind of way. The plot is standard fantasy fare, but more importantly, Conan chops his way through hordes of grunts, meaning there are plenty of massive guys smacking each other around (somewhat randomly including Pride FC muscle men Bob Sapp and Nathan Jones, although the latter is buried under a lot of make-up). ;p 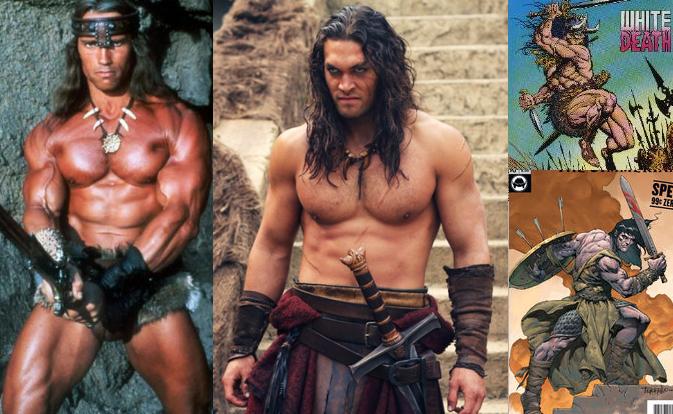 There is also plenty of BJJ in the Dorset area. Fellow fans of Roy Dean can check out the excellent Poole BJJ Academy, where I had the pleasure of attending several seminars with Dean over the last couple of years. At the last one in 2010, I met Scramble head honcho Matt Benyon for the first time, but unfortunately didn't get to actually train with him much. I wanted to rectify that on this trip, so jumped on the 17:04 train from Weymouth to Bournemouth. Handily, the Gary Baker Academy is a relatively short walk from the station, although it is due to move to a new location in the near future.

Tonight's class was run by Gary Baker himself, although Matt did head over later on. Gary has an impressive amount of martial arts experience, with years of thai boxing and JKD. After recovering from a serious back injury, he decided to strap on a white belt and try out BJJ, which is where Matt comes in. Gary is now a blue belt with a bunch of stripes, but more importantly, he has decades of teaching to draw upon.

The warm-up was taken by another blue belt, Luke, which was fairly similar to what I've seen in most academies (i.e., run around the room, knees up, heels up, face in, face out, then shrimp up and down the mats). Wednesdays don't normally feature much technical instruction: we went straight into drilling triangles. That's a positive thing, as a lot of clubs don't provide enough room to get in lots of repetitions. Drilling is essential to integrating a technique into your game, so I'd like to see more clubs set aside some time to simply get in the reps on a triangle set-up, side control escape, mount choke etc.

After drilling for a good while, Gary moved the class into progressive resistance, setting the timer for three minutes (just like I do during my Thursday sessions at Gracie Barra Bristol). This was a good opportunity to practice those triangle escapes I had learned last week from Geeza, but I didn't really take as much advantage of it as I should have done. Instead, I was mostly just practicing posture.

I did eventually remember to try at least one of the escapes, where you posture up and step over their head. However, I think I left it too late to initiate the escape. I was able to step over, drop back and cross my legs, but the triangle was already sunk sufficiently deep that it didn't really do anything. On top of that, it would have been fairly simple for my training partner to just armbar me at the point. I should have gone for Geeza's late escape instead.

Sparring took up most of the class. I started off with Matt, who naturally was resplendent in his Ichiban Scramble gi. Fairly non-bling by normal-person standards, though as a plain gi obsessive, I'd probably want to lose a few chunks of embroidery ;). We had a relaxed roll, which I spent mostly fiddling about in open guard. I'm still not much good at establishing a decent de la Riva hook: people frequently have little trouble smashing straight through my legs. I was looking to get into the orthodox foot on hips guard a few times, but again I need to improve my grips and the tension I'm creating both with my hooking foot and the one on the hip.

That was followed by a couple of white belts. Especially if I'm visiting a club, I'll normally wait for them to make a move (unless they're much bigger, as that can put you in decidedly uncomfortable positions), which in this case meant I spent a lot of it playing from closed guard. I was hoping to break down their posture and go for an attack, but I'm still failing to isolate an arm or the neck. I think part of the problem there is that I'm still not combining attacks properly, flowing from one to another. At the same time, I'm also not committing enough when I do go for an attack.

As I'm planning to teach back mount in my own lessons for the next three weeks, I was looking to play with the position as much as possible. Giving up my back was the easiest way to get there. Once again, I was reminded that the main difficulty I have with back escapes is knowing when to risk moving an arm from defending to neck to pinning one of their legs. If you can pin that leg, then your route out is clear by hopping your hips over, but I often find I'm too worried about the neck.

I also had a chance to practice my ezequiel choke from mount, which I really want to develop into a high percentage attack in my game. I'm still raising up rather than staying low. Worse still, I think I'm tending to press into the windpipe rather than properly cutting off both sides of the neck. That can sometimes get the tap, but it's a very sloppy and inefficient submission, not to mention needlessly unpleasant for your training partner.

A larger white belt was next, so this time I needed to be careful not to get stuck on the bottom. I was impressed by his control: often a big white belt will look to smash you, especially if you're small but a higher belt. This guy stayed calm, just looking to gradually progress, never simply using his strength and size advantage to crush his way to a position.

That meant it was a useful roll for me, where I initially tried to keep him away with my legs. When he managed to pass, I tried diving in for deep half guard, but ended up on the wrong leg. Not something I'm used to doing, but I'd like to develop the deep half, especially as a way of getting back on top when I end up against someone big.

I finished up with the only other person there I've met before, as he came with Matt to the Roy Dean seminar last year. He's a blue belt, so again I spent a lot of time underneath, this time looking to either work from half guard or escape side control. As before, it was a relatively relaxed roll. Given that nobody seemed to be going nuts, despite it mostly being white belts, it is clear the instructors have built up a good atmosphere at the Gary Baker Academy.

It was cool chatting with both Gary and then Matt, who mentioned some of the exciting stuff in the pipeline for Scramble. I was especially interested in one of the products he mentioned, so I look forward to seeing how that is received by the Scramble fanbase.

Speaking of which, there is a considerable Scramble presence at the club, as you'd expect. Gary even shouted 'Scramble!' for the last minute of each round of sparring: I'm guessing that was just to urge people on, but the prospect of subliminal brand reinforcement mid-roll made me smile. It even helped me find the Academy, as I could just follow the increasing incidence of people wearing Scramble gear. I also found it interesting that unusually, my plain white gi was far from the norm: ninja black was definitely the gi colour of choice.