[My pics are crap, as they're from way up in the arena. For decent pics, check out Seymour's blog. His pics of all the British fighters here.] 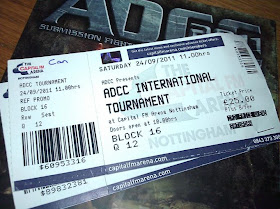 The Abu Dhabi Combat Club Submission Fighting World Championship, commonly referred to more simply as the ADCC, is the most prestigious nogi grappling competition in the world. It's backed by the financial muscle of Sheikh Tahnoun Bin Zayed Al-Nahyan, who aside from being a black belt under Renzo also happens to be incredibly wealthy. That has proved to be extremely fortuitous for grappling, as it means that since 1998, athletes have the chance to actually get some monetary reward for displaying their talents.

I haven't been to a live sporting event for many years: I think the last time was either Beşiktas or Turkey playing at İnönü, back when I used to go to football games in Istanbul with my father. However, when what is effectively the World Cup of grappling landed a train's ride north of me in Nottingham, there was no way I was going to miss it. Binoculars packed, I left my house in Bristol at 6:30am on Saturday: something has to be very special to get me up that early! ;)

There have already been numerous excellent write-ups of all the matches (like this), so I can be subjective. As usual, I was more interested in the women's fights than the men's. Unfortunately, there are currently only two female weight categories at the ADCC, which results in some ridiculous discrepancies. It isn't Gabi Garcia's fault she is so much bigger than everybody else, but she is competing with people literally half her size. It is a huge shame that Cris Cyborg had to pull out (I'm told due to the usual Zuffa shenanigans, but that may be hearsay: after all, other Zuffa employees were in the competition), as that would have been a fascinating match-up. 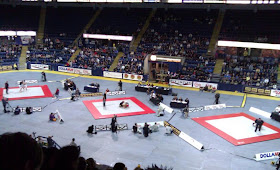 Still, I was looking forward to Garcia versus reigning champ Hannette Staack, who put up a fight, but couldn't quite get underneath Garcia's base. There were a few moments when it looked as if she might be able to enter into a leg submission, but Garcia made good use of gravity. Refreshingly, there was plenty of support for the Alliance stand out, who was visibly emotional at gaining her first ADCC title. Garcia has worked hard on both her technique and her physique, so deserves a certain amount of credit.

It was great that plenty of British women took part, with grappling stalwarts like Dr Rosi Sexton, even if they didn't prove successful. Australian Laura Ng had sadly suffered a blood clot in her leg on the plane journey, which must have been devastating for her. Hopefully she'll be back in two years. Ng's absence meant that my RGA Bucks training partner, Yas Wilson, was called up as a very late replacement. Yas did well, considering she took the match on almost no notice. To go in against multiple time world champion Michelle Nicolini is a tall order for a well-prepared black belt, so to do so as a purple is especially impressive.

Nicolini was probably the most entertaining competitor among the women, with some excellent guardwork in a tense match with ADCC 2009 winner Luanna Alzuguir. Staack gave a dominant performance en route to the final, until she ran into Garcia. As there were several matches going on at once, I wasn't able to watch as many female bouts as I would have liked, but then I can just get the DVD. That has the huge advantage of commentary, which I find increases my enjoyment of BJJ competitions many times over. 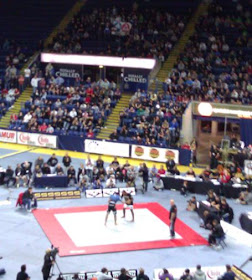 Intriguingly, it seemed the seasoned competitors were tapping early to avoid injury. Or at least they did at first: things changed later on. If you were facing Rousimar 'Toquinho' Palhares, he didn't care if you tapped: your leg was coming home with him. His nickname means 'tree stump', because his huge muscles are packed into a 5'8" frame. He looks like a supervillain: apparently, the man even lived under a bridge back in the day!

After getting their knees mashed by Toquinho, David Avellan and Rafael Lovato were both left to limp off the mat (though Lovato bravely limped right back to face Popovitch for the bronze medal). It took Andre Galvao to finally slay the monster, narrowly escaping the knockout punch of Toquinho's leg attacks. Though his sportsmanship may be questionable, there is no doubt that when Rousimar Palhares is involved, you're in for an exhilarating match. Galvao had an incredible competition, winning not only his weight category, but taking the absolute title as well.

Among the male competitors, I mainly focused my binoculars on Dean Lister. I knew Lister (a black belt in BJJ under Jeffrey Higgs, who in turn is under Fábio Santos) had a decent record in MMA and had done well in the ADCC before (absolute champion in 2003, then he beat Jean Jacques Machado in the superfight at ADCC 2005), but I didn't realize just how skilled he was. Drawing on his experience, the 35 year old Lister submitted three out of his four opponents, which included the favourite, Rodolfo Vieira. That did mean I missed the Vinny Magalhaes armbar defence over on the other mat, which was getting a huge cheer, but Lister's technical mastery was worth it.

Aside from the high level BJJ on offer, I was also excited at the prospect of catching up with friends, both old and new. After heading up on the train from Bristol to the arena, I swiftly got to wandering round the rest of the crowd. That meant bumping into old friends like Zaf, Ciaran, Seymour, Callum, Kirsty from Roy Dean UK, Eamonn, the RGA Bucks crew and various others. I love the way that it seemed almost all of UK BJJ turned out for this event. :D

On the new friends front, I enjoyed learning more about sports science with William Wayland: check out his blog here. While heading outside just before the Renzo superfight, I recognised the author of the she beast blog. Slightly embarrassingly, I got her attention by shouting out 'she beast!', then introduced myself as slideyfoot. Mainly because I forgot her real name was Hannah and my name (Can) tends to confuse people. ;) 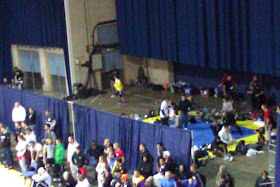 When I heard the ADCC was going to be in the UK and Caleb would be commentating, I had high hopes that he'd be able to sort out another breakfast with the family. That's something the Fightworks Podcast has been doing before big events for a while. Despite being super-busy, Caleb delivered, making time to meet up with members of the Mighty 600,000 on Sunday morning.

I was surprised the turn-out was pretty weeny, though then again, a lot of people went out for drinks the night before. That left me, J-Sho, Caleb and Shawn Williams to chat about BJJ, later joined by a pair of cool Scots. Every time I meet somebody from Glasgow, I ask about one of my favourite bands of all time, Strawberry Switchblade. Not only had she heard of them, she'd even been to their gigs! Awesome. :D

I'm eager to check out all the coverage over the next few weeks. I'm sure Callum, J-Sho and Seymour will have something brilliant in the works for Jiu Jitsu Style. If somebody from the IBJJF is reading, please bring the Mundials to the UK too. ;p