[Thanks to BJJHQ for sending me the gi. If you've not heard of them yet, they offer a different BJJ product every day. That one product is sold at a reduced price, but it's only available for 24 hours.]

Short Review: This new offering from UK brand Tatami Fightwear is relatively plain, comfortable to wear and a good fit if you're slender with long arms (or at least longer than mine, as per the picture on the left). There is contrast stitching, along with white side vents, belt loops and drawstring.

Its £85 price tag is more than I would normally pay, but Tatami's construction is high quality with plenty of reinforcement. I found the tape at the back of the neck a bit scratchy, though I think I'm probably over-sensitive as I also find that with most t-shirts. Buy from Tatami and also keep an eye on BJJHQ. That will probably be the cheapest option, when it pops up on their site. Currently, you can only get the Estilo Classic in blue.

Full Review: I can remember several years ago when Tatami Fightwear had just started up: I think that would have been about 2008 or 2009. Since then, Tatami has managed significant growth, with a considerable range of gis on offer. Tatami sponsors lots of UK athletes, along with massive names like Terere and Robson Moura. They've also collaborated with BJJ bloggers, in particular Seymour from Meerkatsu, which resulted in the pin-up gi. I wasn't a fan of the pin-up design, but I was definitely a fan of Tatami's engagement with the local BJJ community. Today, they aren't just a UK company anymore, selling around Europe and also the US.

The Estilo range is among the 'premier' gis produced by Tatami Fightwear. Generally speaking, I find that the Tatami gi has too many patches and embroidery for my liking (which isn't saying much, as I find almost every gi has too many patches and embroidery). The Zero G, which I've reviewed previously, is a typical example: patches across both shoulders, on the back skirt and even down the sides of the trousers.

When BJJHQ asked me if I wanted to review a gi for them, I said I'd be happy to as long as it was plain. They suggested Tatami, so I expected that would probably mean the budget Tatami Nova gi: that's intended to be a simple, entry-level gi, retailing for £51 (which I have since reviewed, here). However, I was instead sent the Estilo Classic. Unlike the Nova, Tatami's Estilo range is closer to £90, generally with plenty of bling. 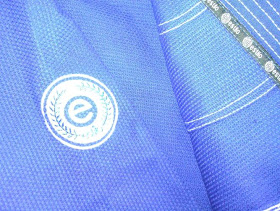 The Estilo Classic is a step away from that busy look, with almost no patches: there are just two small designs at the top of the trousers and the jacket lapel. In terms of embroidery, the Estilo logo appears on both arms and at the bottom of the trousers. 'Tatami Fightwear' is also embroidered across the back of the jacket. Finally, there is a branded strip of tape running down the inside of the jacket and the cuffs of the sleeves and trousers. 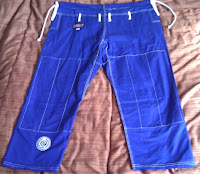 It is a well-made gi. I had a thorough look after I unwrapped the parcel, but struggled to find any loose threads. That was impressive, as almost every gi I've reviewed has at least a few, and speaks to the quality of Tatami's factory. As with other Tatami products, the Estilo Classic also comes in its own drawstring gi bag, which is a classy touch. According to the Tatami website, the jacket is made from a single piece of 500gsm pearl weave material, while the trousers are heavy 14oz canvas. It also apparently comes with the option to 'mix and match', which is a great feature, though I couldn't see a separate drop-down box for trouser size (but that might just be me being dim).

As regular readers will know, I'm somewhat extreme when it comes to gi plainness, so it won't surprise you to hear that the Estilo Classic was still a bit too bling for me. I would prefer just the Estilo logo on one arm and trouser leg, possibly the two small patches, but nothing else. However, they are all relatively understated, with the patches saying 'Tatami Fightwear', while a simple 'e' in a laurel wreath adorns the leg and arms.

I was pleased to see there wasn't any embroidery or patches on the shoulders, as that's something I especially dislike. Patches on the shoulders are difficult to remove, as they tend to be sewn under the collar. Then again, embroidery is much, much harder to remove, which is at least one advantage to patches. I'm not fond of the way the Estilo Classic has words across the upper back, but again, that is a personal niggle: I don't think embroidered text is a good look, but your taste may vary. 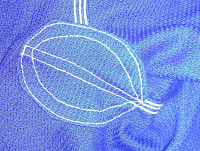 The Tatami Estilo Classic is currently only available in blue. I have never worn any gi other than white: hence why this gi was unlikely to ever get into my regular rotation, no matter how good it was. Obviously this isn't going to be a problem for most people. Also, it looks as if the shade of blue is IBJJF legal. I guess if I ever competed in an IBJJF event, it would be useful to have a blue gi. As far as I'm aware, Tatami are planning to offer other colours if the Estilo Classic proves popular. 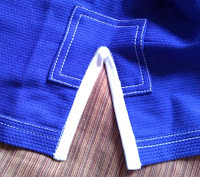 You'll also notice there is plenty of white contrast stitching. The side vents on the jacket are white too, as are the two drawstring vents and the four belt loops on the trousers. As with the Zero G, the drawstring is a bungee rope cord rather than a flat cotton string. Drying time is fairly average, going from straight out of the washing machine to fully dry in about 40 hours. Not having washed a non-white gi before, I wasn't sure if the colour would run, but fortunately that wasn't an issue.

This is also the first time I've worn a gi with branded tape stitched along the inside. I was a little wary of that tape, as I know Seymour over at Meerkatsu has mentioned that this tape can be scratchy. My skin appears to be similarly sensitive, as I will generally cut off labels on the inside of t-shirts and the like. Otherwise that tickling sensation at the back of my neck swiftly starts to annoy me.

I found that the tape at the neck of the Estilo Classic was indeed slightly abrasive, but the tape did not cause discomfort anywhere else (I don't wear a t-shirt or rash guard under my gi, so the tape was in direct contact with my torso, neck, wrists and ankles). Also, I've still got the vestiges of sunburn on my back and neck, so the skin was probably even more sensitive than normal. Finally, people tell me that scratchiness diminishes over time: I didn't notice it during the open mat sparring on Sunday, so clearly it wasn't that much of a distraction.

In terms of shrinkage, I measured the trousers from top to bottom and the outside of the collar to the cuff. Before washing, the trousers were just over 99cm/39 inches. After the first 40 degree celsius wash, that went down to 98cm/38.5 inches. After a second wash, there was another drop to 96cm/37.5 inches. There is plenty of knee padding, another good touch, securely attached. The seams are also solid, given that they're triple-stitched, with loads of reinforcement in the crotch area as well. 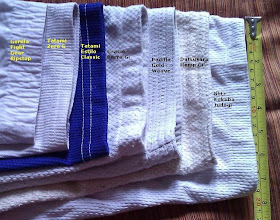 The sleeve started out at 74cm/29 inches. After the first 40 degree celsius wash, it dropped to 72cm/28 and a bit inches, which is where it stayed after a second wash. Partly due to that lack of shrinkage, I found the sleeves were a bit long for me, as you can see in the picture at the top of this review. The sleeves are tapered, ranking third thinnest in my sleeve comparison. The jacket in general wasn't a bad fit, so looks like it would work well for somebody with a similarly slim build. The collar is made of rubber, but held its shape at 40 degrees. Still, I would recommend avoiding higher temperatures, as otherwise it is liable to warp.

If you like plain gis but still want a bit of style, then the Estilo Classic may be up your street. I think I'm unusual in my tastes, so the lack of patches and embroidery – by normal standards at least – should have wide appeal even among more conservative BJJers. Judging by my experience, there isn't a lot of shrinkage in the arms, so pick your size carefully.

The construction looks to be excellent quality, so I would expect that if you drop the £85 on this gi, it should last you a long time (though naturally I can't say that for certain without a longer test). Available to buy from Tatami and I suspect it will be up on BJJHQ.com at some point too: keep an eye on their site.
slideyfoot at 09:56
Share