Short Review: This is a comfortable, well-fitting gi, which is also very light. Due to the pearl weave and ripstop trousers, along with a tapered cut, the Predator is ideal for a competitor close to their weight limit. It is also both sanforized and mercerised, which not only makes the Predator a notably brighter white, it more importantly guarantees the gi won't shrink more than 1 or 2%. That means you should check the size chart carefully: I bought a size below my usual option.

The only downside for me was the amount of embroidery and patches: the word 'Predator' is emblazoned all over the gi. However, as I discuss later in this review, you can remove the embroidery, it just takes a long time. The Predator is available to buy here in the UK for £79.99. 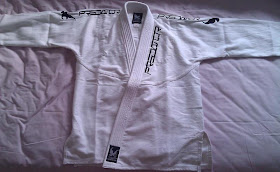 Full Review: I hadn't expected to receive a Predator, as I was waiting on the new 'Basico' offering from Black Eagle. However, having both of them drop through the letterbox meant I could be comparative, which is useful. The Predator was a big step for Black Eagle in 2010, completely redesigning their previous BJJ offering. It was then followed in 2011 by a considerable marketing push for the Mark II: this review joins many others around the web. That also inaugurated the Predator BJJ range, which has become a broader BJJ product line including equipment for nogi (a website is in the works, AFAIK). 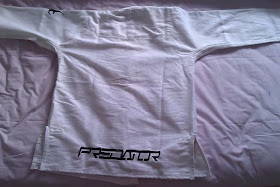 A relatively unique feature of the Predator gi (or at least I haven't owned any other gis that make the same claim) is that it is guaranteed to not shrink beyond 1-2%. That's something which has been tested by Meerkatsu, who surprisingly found that it actually got bigger after repeated hot washes. SkinnyD discovered that it would still shrink if you put it in the dryer, though generally that isn't part of a gi washing routine: personally, the only reason I ever put a gi in the drier (for the very few who might be wondering, I've seen it spelled both ways) is to shrink them. 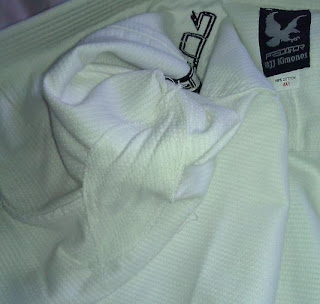 Washing my own Predator, I kept it at 30 degrees Celsius, which perhaps unsurprisingly didn't result in any change. The width from cuff to cuff stayed at 153.5cm, while the trouser length didn't deviate from 90.5cm. Apparently that resistance to shrinkage is because the material of this gi is not only 'sanforized', but 'mercerised' as well. I've seen those terms mentioned before in other Predator reviews, but until joining those reviewers myself, I had no idea what they meant.

Looking around the internet, Wikipedia tells me sanforization dates back to 1930, when the process was patented by Sanford Lockwood Cluett (1874–1968), who hailed from New York. You might well have seen the 'sanforized' label inside a pair of jeans (unless you're me, as I don't wear jeans: not enough pockets ;p). There is a link to the OED on the wiki, so as I happen to have access to an electronic edition, here's the definition: "A proprietary name for cotton and other fabrics which have been preshrunk by a special process." Which doesn't tell me much.

Fortunately the other link on the wiki is rather more expansive, with an illustrated description. In short, the actual method itself is called 'Controlled Compressive Shrinkage'. That involves running the material through a machine, which first sprays the cotton with water and steam, squashes it in various ways, then finishes off by drying to lock the threads. CCS is entirely mechanical, rather than chemical. 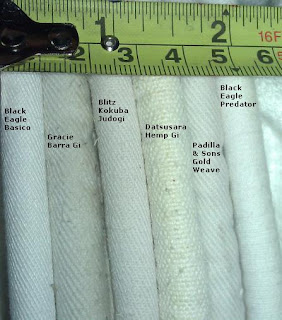 The etymology of 'mercerised' is similar, but this time it owes its name to a gentleman from Lancashire (nice to see the local County Council is proud of him), John Mercer. Incidentally, he's appropriately named, as 'mercer' means "One who deals in textile fabrics, esp. a dealer in silks, velvets, and other costly materials". Mr Mercer was English, so as you might expect, that means the innovation dates back to the Industrial Revolution (1844 to be specific, patented in 1851), when Britain was the global power rather than the USA. 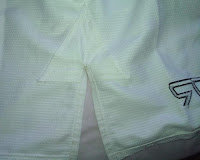 According to the wiki, Mercer wasn't the man who popularised the process that bore his name: that was down to H.A. Lowe, who made some changes in 1890 (though I guess not enough to warrant 'lowerised'). The wiki states mercerising apparently strengthens the fabric, this time thanks to a chemical (sodium hydroxide) instead of a machine. Tom Beaudet goes into a lot more detail:

John Mercer was granted a British patent for work he had done pertaining to cotton, linen and other vegetable fibrous materials that in effect caused certain changes in the character of the fiber when subjected to caustic soda, sulfuric acid, and/or other chemicals, etc. He went on to list a number of these changes, one of which was that caustic soda caused the fiber to swell, become round and straighten out (but it did not impart any change in luster). At the time Mercer introduced these processes, the British cotton trade showed no interest in any of it and it all sat in obscurity for about forty years. In 1890 Horace Lowe was granted a British patent in which he claimed that by applying Mercer's caustic soda process to cotton yarn or fabric under tension a resultant high luster (a result of the light reflection off the smooth, round surface) was imparted to the fiber. It became an overnight success and revolutionized the cotton industry. The rest is history.

Research into random fabric processes aside, this gi is comfortable and light. The top is pearl weave, which in this case results in a thin, soft but still sturdy jacket. It's very light, comfortable, and due to all that sanforising and mercerising, a notably brighter, shiny white compared to other gis. The ripstop trousers also felt fine, though my training partner did find them a bit hard to grab (which may be down to size rather than material). The Predator also dries quite quickly, taking less than a day, which is another big plus point in its favour.

The foam collar feels relatively strong, and like the sleeve and trouser cuffs reinforcement, it is covered in ripstop material. I'm not sure if that has any particular benefits, though I would assume that it helps make the gi lighter, as well as speeding up the drying process. If you don't know what ripstop is, I've got a long description over on my review of the Gorilla Fight Gear all-ripstop gi, here. 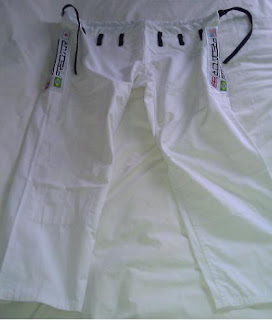 There are a whopping six belt loops on the trousers, which create a point of contrast, as they're black as opposed to the otherwise white fabric of the gi. The drawstring is black too, and also slightly longer than usual. Black Eagle have opted for a flat drawstring rather than rope. Although I know some people love the rope tie, I'm not overly bothered either way. The flat drawstring is perhaps marginally my preference, as there is no danger of it forming a large knot that digs into you. Then again, I've not yet had that problem with rope drawstrings, as they've been sufficiently soft that I haven't noticed the knot causing any pressure. 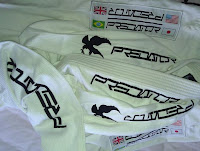 The design isn't to my taste, as there is embroidery down the front of the jacket, shoulders and the back of the skirt, plus patches on the upper legs. As I've mentioned before, I especially dislike large text on a gi, as it makes me feel like a billboard. That meant while wearing the Predator, I kept thinking that although I quite liked the fit (which works for big guys too, as discussed by Big Stew in his review), it was going to take a long time to remove all that bling. Fortunately, another Black Eagle gi was due to arrive which I hoped would solve that problem: the Basico. Look out for the review next week.

It is possible to remove embroidery, but the procedure is even more time-consuming than getting rid of patches. You need a range of tools, patience and a lot of time. From what I read, it also isn't easy to avoid damage to the fabric. At best, you'll still probably leave behind some discoloration. Still, I'm suitably anti-bling to at least give it a try, so I headed for the sewing kit. As it turned out, the process itself isn't that complex: shave the back of the embroidery with a beard-trimmer (not essential, but speeds things up), then as with patches, carefully cut your way through the strands of thread, again from the back. Finally, pull out the loose threads with a pair of tweezers (you can use your fingers if you prefer). But be warned: just getting rid of the 'r' on the jacket skirt embroidery took me over an hour, as there tend to be several layers of stitching.

At £79.99, the Predator isn't cheap, but it isn't ridiculously expensive either. If all that science lives up to its claims, it's a fair price for increased quality and durability. Available to buy here in the UK.

Update August 2014: Sadly, the company no longer exists, as per this status update on their Facebook page. To quote the founder, "Due to the incompetence of the people we effectively sold our business to, and from which we still earn a living through a percentage of sales, Black Eagle has now ceased trading. Those concerned still owe us £20K, plus earnings, and have left us completely penniless. So, if you see cheap Black Eagle gear being sold, please don't buy it, we get nothing for it, and you will just be lining the pockets of the liquidator."
slideyfoot at 10:40
Share