Short Review: This gi is plain, well-built and affordable, further justifying Padilla & Sons long-standing reputation for quality. As you'd expect from the name, the Ultra Light also has the advantage of weighing less, due to the lightweight jacket and ripstop trousers. It's large out of the box, especially the trousers, so you'll need to shrink it. You might also want to chop down the drawstring, which dangled past my knee. Like the other Padilla & Sons I've owned, the fit is fairly baggy and some may not like the longer skirt, though that's something I'm used to from regularly wearing judogi to class. Available to buy direct from the Padilla & Sons website, here, for $100.

Full Review: In my ongoing hunt for plain, white and functional gis, Padilla & Sons was the opening entry. I bought my gold weave back in 2007, meaning it was the first specifically BJJ gi I had ever bought. I was convinced by reading a few reviews, particularly this one (still probably the best gi review ever written, given how many people bought a Padilla & Sons gi on the strength of that post) which spoke highly of the durability, price and excellent customer service. I found all three of those to be true after getting my gold weave, so ended up buying a single weave a little further down the line. It is now 2011, but both gis show no sign of wear and tear, except for some slight discolouration on the inside of the jacket.

Company founder Joe Padilla is a black belt under Rigan Machado. He has an extensive history in martial arts, as IIRC, Padilla has also done judo, boxing, arnis and kempo. Back in October 1998, he produced a double weave, sold locally in California. The following year, Padilla & Sons expanded into the rest of the USA and Europe, but still on a very small scale. The company took a hiatus for a few years in 2001, starting back up in 2003.

When Padilla & Sons were building a reputation for solid, affordable gis at the turn of the millenium, BJJers wanted a suit of cotton armour that could go the distance. That meant heavy double-weaves, built to last rather than for weight limits or hot weather training. Trends have changed considerably over the years: more recently, there has been a boom in lightweight weaves, the lightest of which is the ripstop.

Padilla & Sons have entered that market with their suitably named 'Ultra Light'. The jacket is one piece, constructed from 400 gram cotton, so there is no seam on the back. The collar is cotton under ply, of a comparable thickness and stiffness to my Padilla single weave, covered in ripstop material. The trousers are also ripstop, as are various areas of reinforcement, such as on the trouser and sleeve cuffs. As I would expect from Padilla, those reinforcements all look very solid, with plenty of stitching. 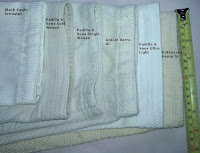 Joe Padilla is famous for his customer service and rightly so (although as I was sent this for review, it was a slightly different scenario to the previous two times). He provided a tracking ID for the parcel, so I could watch it travel from Los Angeles right through to Bristol, meaning I knew exactly when it was going to be arriving and whether or not I'd have to pay any customs charges. I did get hit slightly with VAT, but not as badly as I was expecting at just under £30 (around a third of which was a dubious 'handling fee' from Parcel Force). However, that potential cost is worth keeping in mind if you're buying from outside of the USA. 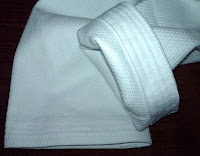 There is a broad range in the size chart, from A0 (4'5"-5' and 75-110 lbs) through to A6 (6'5"-6'9 and 290- 325lbs). I went for an A2, as my gold and single weaves are also A2, but I think in future I may go for an A1 instead. Either way, it would be wise to check with Joe Padilla before you put in your order: I can pretty much guarantee that he'll respond quickly with the advice you need. When I bought my first gi, he even offered to call me to discuss the right size, despite the fact I was living in the UK and he's in California. 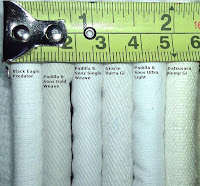 This gi is not pre-shrunk, so it feels big out of the box. The trousers in particular are enormous, at 100cm in length. The jacket is pretty long too, at 82cm, while from cuff to cuff is 165cm: however, it didn't shrink as much as I expected. The length of the jacket didn't really shift at all. After the first 40 degree Celsius wash, the gi dropped down to 98cm long trousers and 160cm cuff to cuff. The second time, the trousers reduced to 96cm, while the jacket remained about the same. I would expect further shrinkage in future washes, going by my other two Padilla & Sons, or I may try throwing it in the tumble drier: I'll update the review if so.

A major attraction for me is that Padilla & Sons don't slather their gis with advertising. There are only two bits of embroidery, featuring the Padilla shark. On the trousers, there is a mercifully small patch (also on the jacket lapel), rather than the huge billboards common to many other gis. The design is slightly different to the single and gold weaves I own, as rather than a shark on the arm and then another encircled by text at the bottom of the jacket, the embroidery is on both arms. 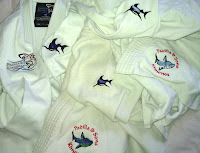 The 'Padilla & Sons' logo has changed since the gold weave, with a new design which I think was first brought in for the lightweight weave. I prefer the earlier version, but it's easy enough to remove if I ever decide to do so. Another difference is a large inner label that sits just behind your neck, which I found slightly itchy. I would expect that to lessen over time, but if not, as with the embroidery I can just pull out the stitches. The information on the label is at least useful, as it gives washing instructions, which I haven't often seen on gis. 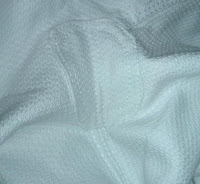 Ripstop trousers tend to become a stiff when wet, which you'll notice after you take them out of the wash. Nevertheless, I didn't experience any discomfort during training, which has also been the case with the other two sets of ripstop trousers I own (on the Predator and Gorilla ripstop, both of which feel a little softer than the Padilla & Sons trousers). I guess it depends how much you sweat. The drawstring is enormous, so you may find you need to cut that to a more convenient length. I often worry about ripstop tearing, as I'm still not that used to wearing it, but the Padilla & Sons trousers have held up fine so far. That includes two classes on passing the guard, meaning the material by the knees was getting scrunched up and yanked for about three hours.

If you're looking for a plain, well-made gi for a fair price, then Padilla & Sons are tough to beat. This gi is ideal for people who cross-train in judo, or who don't mind a looser fit, but you might be less keen if you're used to your gis clinging tightly to your body. Available to buy direct from the Padilla & Sons website, here, for $100.
slideyfoot at 12:09
Share