Short Review: This new brand out of Canada is among the most comfortable I've worn, particularly the trousers, which are further enhanced by the unusual addition of a flexible crotch panel. The jacket is modified too, in that the collar has a rubber insert, which means it dries more quickly and is less likely to gather bacteria. That also means it is more likely to be damaged by a hot wash, although I've been reassured this particular collar has been treated to make it much more resistant to higher temperatures. The overall fit of the gi was good, although the arms may be slightly long for some: it is pre-shrunk and does not seem to shrink much if at all in the wash, so the size chart should be relatively accurate.

Full Review: I was contacted by Bruno Munduruca from Fighters Market about reviewing a new gi, which at first I assumed was from a third party manufacturer. It turns out that Munduruca himself is in charge of Kingz Kimonos, a company he set up this year. Bruno is also a purple belt instructor at Munduruca BJJ in Canada, alongside his brother, black belt Rodrigo Munduruca. Rodrigo is still an active competitor, winning the Masters Ultra Heavy category at the recent IBJJF No Gi Worlds. In other words, the people behind Kingz have plenty of practical knowledge about what makes a good gi. As Bruno put it when I asked what led him to found Kingz:

I have been selling BJJ kimonos since 2000 and have sold or seen pretty much every single gi made in Brazil and a lot of the gis made internationally. I tried to use the feedback from our customers and my personal experience to create this new brand. 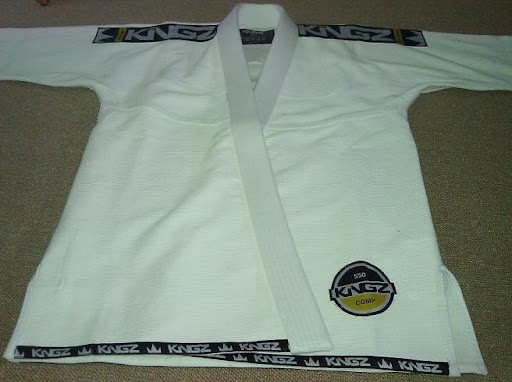 Like most of my recent review gis, I again went for an A1, though as ever be sure to check the size chart, which covers everyone from 95lbs right up to 310lbs. At least for me (I'm 5'7" and about 145lbs), that chart was accurate: the Kingz 550 Comp fit great out of the bag. It is pre-shrunk, which no doubt helps a lot. The trousers especially are exactly the length I like, at 90cm. The jacket was 161.5cm from cuff to cuff, which is slightly long for me, but still comfortable. As you would expect from a pre-shrunk gi, after washing I couldn't see any obvious change, though I should note that I generally wash gis at 30 degrees Celsius then hang them up to dry. 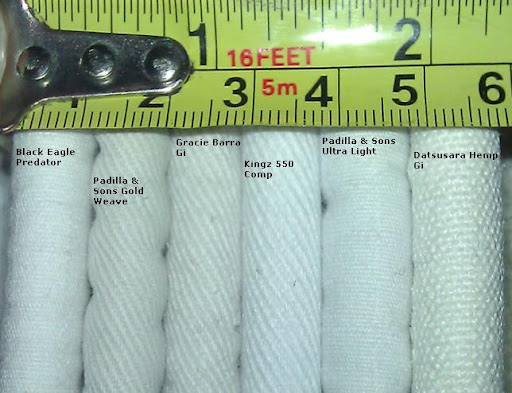 There are three models currently available from Kingz. The 550 Comp is the heaviest of the three, with a pearl weave jacket, which is 550gsm (hence the name). Like most gis, the jacket is made from a single piece of fabric, meaning there is no seam on the back. The collar is vulcanised rubber, which helps in terms of drying quickly, but normally indicates that you don't want to put the gi in the tumble drier, or that rubber is liable to twist and curl due to the heat. However, the details from the website mention that the rubber is apparently heat resistant: Bruno also told me that it will not 'baconate' in higher temperature washes. 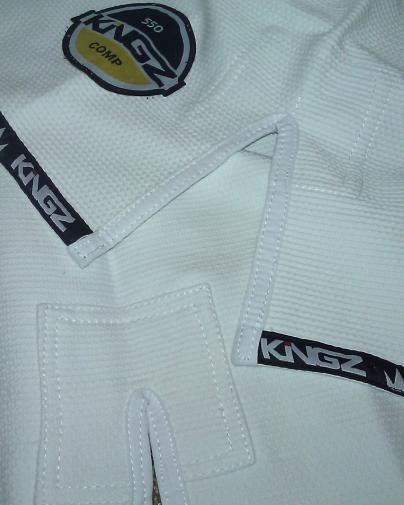 I found the jacket soft on the inside, but relatively abrasive on the outside, especially the back of the jacket skirt, for some reason. That could be potentially useful in competition, if you want your jacket to be harder to grip, although it may be that the slightly rougher texture will soften after repeated washing. There is triple stitched reinforcement on all the major stress points, and the rubber collar seems solid as well. As it's rubber that means it is a thinner collar than usual, but still firm, so tougher to grip than the more flimsy cotton equivalent. 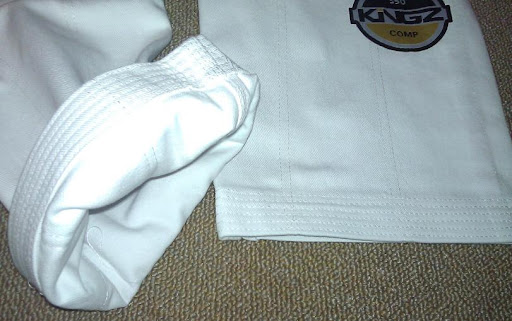 The trousers are 11oz cotton twill with a standard flat cotton drawstring (which I prefer). There are six belt loops, grouped together in pairs: I don't think any of the other gis I own opt for that method, but you can see it on various premium brands, like Shoyoroll and Origin. I really like the Kingz trousers: they're comfortable, sturdy and fit my legs perfectly. There is lots of padding by the knees, which according to the official details are double reinforced, then triple stitched with an overlapped seam. The stitching on the trouser cuffs is equally beefy, with multiple rows. 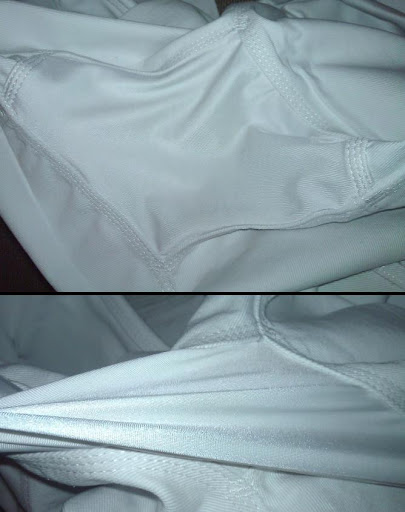 I initially didn't notice the most interesting feature of these trousers, which is the flexible crotch panel. The only place I've seen that before is on the Sprawl Gi-Flex, where the designers opted for black in contrast to the rest of the trousers. That looks a little weird, so I think the decision by Kingz to keep their trousers all the same colour was a sensible one. I'm not sure how the stretchy fabric will hold up over time, as I wouldn't expect it is as strong as cotton twill, but so far I haven't noticed any damage after sparring or washing. 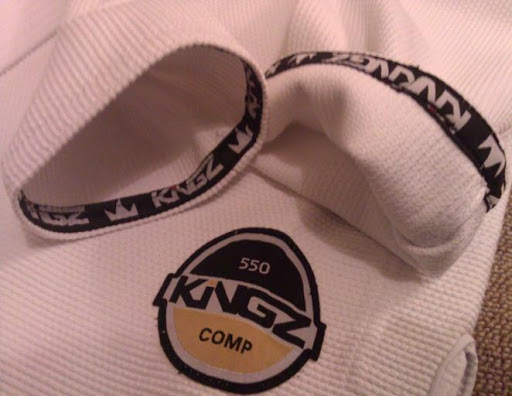 The gi has a number of patches, on both shoulders and the front jacket skirt, along with the lower front of the jacket and two patches on the trousers. There is no embroidery, though there is a logo trim along the bottom edge of the jacket, as well as inside the sleeve cuffs. Unlike some other gis, the tape inside the cuffs did not irritate my skin, so either the Kingz has better stitching or the tape material is smoother. 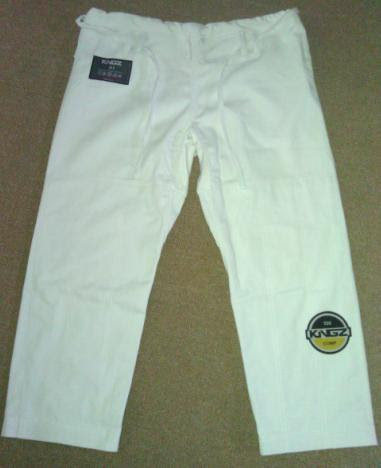 If like me you're not fond of patches, then they aren't too difficult to remove, as it is all single stitched (as opposed to the heavy layers of stitching on something like the Basico trouser patches). The patches on the skirt and trousers are especially simple to take off. However, the shoulder patches go under the collar, so that last bit is tough to pull out. 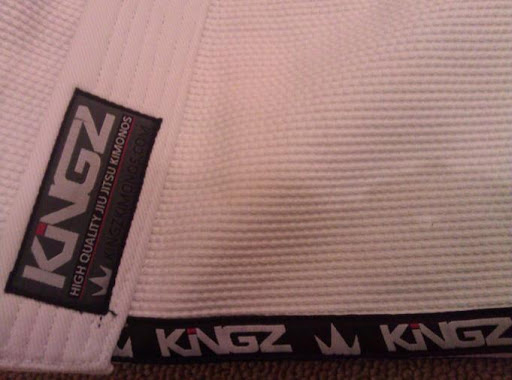 Also, having tested this (and then sewn it back up), I would advise you don't remove the logo trim. That's because the stitching on the tape is holding together a fold of material running along the bottom of the jacket, and like the shoulder patches it's also sewn under the collar. Naturally most people don't mind patches, so I've put up the pictures for you to judge for yourself. I should also add that even as a plain gi obsessive, I quite like the black and yellow colour scheme on the Kingz 550 patches, especially the two circular logos, which reflect the relatively minimalist design on the rest of the gi. 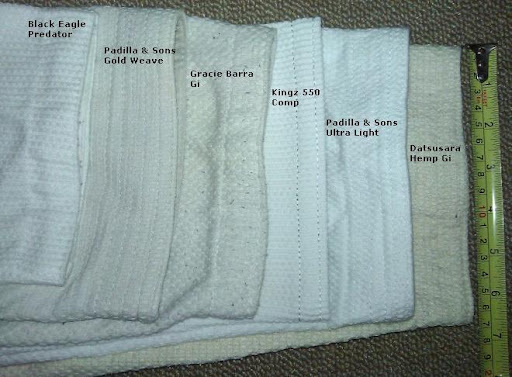 If you're looking for a comfortable gi with a clean design, I can recommend the Kingz. Keep in mind that it won't shrink, so check the size carefully. Also, at $150 it isn't cheap, but you do get quality in return for your cash.
slideyfoot at 15:45
Share