In the previous instalment of this four part interview, Mauricio spoke about his history teaching BJJ. In the final part this week, he shares his views on the growing trend of belt tests in BJJ, along with a couple of closing statements.

slideyfoot.com: There are several schools in the US which use a formal belt test to grade their students, do this technique, do that technique and so on. For example, Alliance, Pedro Sauer and ATT. What do you think of that practice?

Mauricio Gomes: I don't really know what that is, so I can't really comment directly on that, as I don't really know what they do. We still use the old style, if you want to put it that way, if testing is a new style: I don't really know, that's why I don't want to compare. The only thing I can say is how we do it. The student gets their stripes, then when they get their fourth stripe, they're considered for their next belt. But, first there will always be respect for the rules of the international confederation. I believe that no matter what happens, in any situation, you need rules. Those rules are given by a board of people who are there for that. In a country, it is the congress that gives the laws, in our case, it's the confederation.

I see people nowadays using the same belt as me, and they got their black belt ten years after me. It's very hard to swallow that. I think they probably had their reasons, I'm not going to go into that, because it doesn't really concern me, but I would be extremely ashamed knowing that I'm not there yet but have the belt. It's like, if a guy is a blue belt, you give him a brown, but skipped purple belt and it doesn't matter, you're a brown belt now. There has to be that process, going through your four stripes, then there is like a minimum of two years to get from one belt to the other. There are some situations you've got to respect. That's what the rules are there for.

slideyfoot.com: Talking about this, one of the arguments I hear from the people who like the belt testing idea is "well, otherwise the instructor can't know if the student understands all the techniques, maybe they're just strong, maybe they're just really good with their triangle." 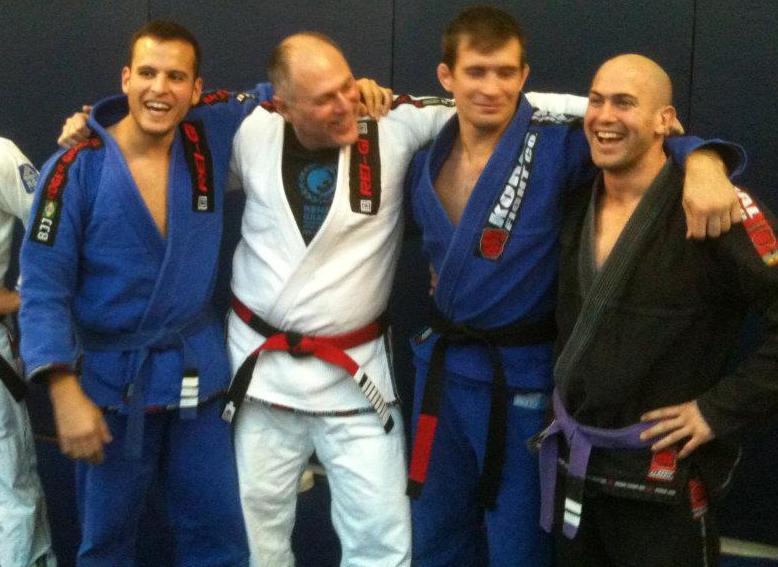 Mauricio Gomes: No, that's not possible, no. A good instructor, that is training their students, with them every day throughout the year, believe me, they know who is capable of doing what and who is ready for this or that. Believe me, they know. I know, so they must know too, right? If not, what are we doing here? Having a coffee while everybody is training? You are there to do your job. Your job is to look after your students, teach them the best you can and help them through. That's what we're there for.

Otherwise, it would just be open the door, put a mat down, then "let's rumble," then "ok, time to go." You wouldn't need an instructor. What do we get paid for, for nothing? I believe that the instructor knows what they're doing, has to know what they're doing. They will know who is ready for this or that. They have to know.

slideyfoot.com: Do you happen to remember who the first female black belt was? I've asked various people this question, as have others. So far the top three contenders seem to be Karla Gracie (Carlinhos' sister, mentioned in a 1997 Black Belt Magazine), Patrícia Lage (who competed as a black belt at the 1998 Brasileiros, though she herself has said there were others before her) and Kim Gracie (Rickson's ex-wife, who may possibly have been a black belt in 1997).

Mauricio Gomes: Honestly, I'm not going to lie to you, I don't know. I think a lot of girls were training, but it's probably the same situation with something like "who did the first flight?" The Wright brothers, or that French guy who was living in Brazil, Santos-Dumont. There probably were a lot of things going on, so who is going to know the first black belt woman in history? I don't think you'll ever find that answer. It would probably be things happening more or less at the same time. Alexandre Paiva's wife is one, I remember her getting her black.

I'm quite certain that these girls, Kim and Karla, I don't think they trained at all, or if they did train, not enough to get a black belt. This is me guessing, and I know them both. Maybe they did, I don't know.

slideyfoot.com: The main source that the Karla story comes from, and perhaps it wasn't well researched, is that Black Belt Magazine article. It was going through all the Gracie family members, then it said Karla was "the only female family member to reach black belt." Maybe they got the name wrong, or it was a political thing to put that in?

slideyfoot.com: You are well-known for your knee on belly. Is that something you've always been really good at and worked on?

Mauricio Gomes: I worked on it a lot, yeah, over the years. You know how fighters are, over the years. If a judo player trains for many years, they will have one or two really, really great takedowns that if they catch wind of it in any position, they'll take their opponent down. In jiu jitsu, it is probably the same thing. My knee on belly is something that I'm so comfortable with, I've been doing it for so long, it's something I now do well.

slideyfoot.com: Did you start doing that at blue belt, white belt, or did it come in later?

Mauricio Gomes: Blue belt. It is one of those things, you like what you do. Blue and purple belt is the time you start experimenting with a lot of things. "I like this, I don't really like that much." I probably got along well with the knee on stomach.

Thanks again to Mauricio for agreeing to speak to me, and thanks also to Geeza for bringing him down to GB Bristol. For more Mauricio, check out Issue #7 of Jiu Jitsu Style, available now. More recently, you can check out this 2013 interview with Mauricio on the Open Mat Radio podcast.