Having gone through mount escapes on Monday, I could have shown them how to hold the mount too. I instead decided to move on to the guard, which is arguably the most fun position in jiu jitsu. As the last lesson put them in guard after shrimping out of mount, it seemed like a useful progression. The most simple sweep I know is the scissor sweep, so I went with that.

Start by getting a deep grip on their opposite collar, then with your other hand grab their same side elbow. Alternatively, you can grip their wrist and pin it to your chest. Rener makes a clear distinction here, as he suggests grabbing the sleeve if they are pushing into your bicep, grabbing the wrist if they are pushing into your chest. Either way, your intention – and this is true for lots of sweeps and reversals – is to prevent their ability to post with that hand. That makes for a straightforward test for whether or not what you’re using is effective: can they put their hand on the mat and prevent the sweep?

The next step is to put your foot on their same side hip (or the floor, depending on your preference) and shrimp out slightly, to make space to insert your knee. Slide that knee over, once again to that same side, until your shin is across their stomach. Hook your instep around their other side. Another option is to angle your knee towards their shoulder, which can act as an entry into the triangle.

A key detail is to then raise your elbows towards your head, so that you're pulling them onto your shin. The aim is to load them onto your leg, which in turn means that their weight is no longer on their legs. Extending your torso back, rather than remaining curled up, may help that weight transfer.

This should make them lighter: drop your other leg to the mat, chopping underneath them as you bring your hooking leg over, rolling into mount. Ryron has two handy tips here. Firstly, use the heel of your hooking foot to swivel and clamp to their side, becoming a leverage point to assist your shift into mount. Secondly, bring the elbow of your sleeve gripping arm further backwards, to put your opponent even more off balance. 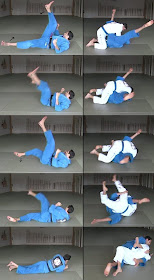 As it turned out, one of the people attending the session has problems with her back and leg, which made the scissor sweep difficult for her. From my perspective as a teacher, that was great, as it meant I had an interesting challenge to overcome. Fortunately, BJJ is adaptable for body type, so I instead showed her the flower sweep. There are lots of options in terms of grips, but to keep things simple, I stuck with double wrist control. Kick your leg to swivel your body to a perpendicular position, which should also put your other leg right up into their armpit.

Bring that armpit leg over your body (go diagonally, towards your shoulder), while chopping the other leg underneath. It's important you clear that leg out of the way, in order to smoothly roll through to mount. If you fail to chop that leg through, you'll roll your opponent on top of your own leg. At best, you'll then end up with a very sloppy sweep, but at worst, you'll block your own technique and end back in guard. I hadn’t prepared for teaching that sweep, so it was a bit off the cuff: next time, I can be more thorough.

The scissor sweep shouldn't require much strength, so if you're having to strain, you probably haven't pulled them forward enough first. You can also get this sweep if they raise a knee up, which is the classic way to teach it. Drop your same side knee towards their opposite hip, then continue the sweep as above. If you're finding that when you try and chop their leg they simply step over it, raise your chopping leg slightly. You might even try hooking behind their knee with it, as that will immobilise the leg, although it may also make it more difficult to get a smooth chopping motion.

If for some reason you're having trouble chopping out their leg, you can switch to a push sweep, which is very similar to the scissor sweep. Everything is the same, except that you don't chop the leg. Instead, move your head back in line with theirs, so your torso is square on, then slide what would have been your chopping leg backwards. You now have room to use the foot of that leg to push into the side of their knee. Tracing a semi-circle, you're then going to shove their knee straight back, which will knock them off balance, whereupon you can roll through to mount as before.

A common mistake is to try and push the knee backwards right away. That is unlikely to work, as there will probably be too much friction. You need to push the knee slightly sideways first, then trace that arc to get the leg back. They should start to fall as soon as you do that, meaning that gravity will help you initiate the sweeping movement.
slideyfoot at 20:20
Share