The first guard pass most people learn is the single underhook, sometimes known as a smash pass (although confusingly, there is also a completely different pass you might see called the 'smash pass'. The joys of BJJ's non-standardised terminology). After you've opened their guard (this can also work off a failed armbar or triangle attempt on their part), you need to get one of your arms under their leg. Your other elbow – and this is absolutely key – must not slip in front of their other knee. If it does, then you're at risk of being triangled: they simply need to pull the arm forwards to move into a triangle set up, as your first arm is already out of the picture. 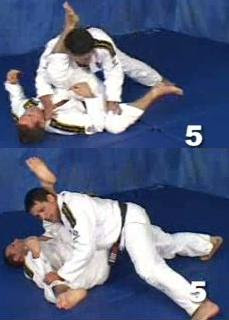 You don't want to leave that first arm under their leg, as unless you're much bigger, their leg is always going to be able to outpower your arm. Therefore you need to get their leg up onto your shoulder, either bumping it with your arm, or dropping down to put your shoulder in place. At that point, drive forward so that you're shoving their knee into their face. When you've got them stacked, reach your stacking side arm around their leg and grab their collar. I tend to go four fingers in, but a thumb in grip sets you up for a simple (if somewhat crappy, so it's mainly for distraction) forearm choke. You can also try grabbing their opposite shoulder.

Keep on driving forward, until they become so uncomfortable that they basically want you to pass. Don't lift your head to get past their legs. You are going to squash your body into them until you can slide by their legs, using constant forward pressure. At most, you might need to nudge their legs with your shoulder. To further enhance your stack, you can grab the back of their trousers, or alternatively put your knee there as a wedge. Remember to stay on your toes throughout: you want your weight on them, not the mat.

A similar option is the stack pass, also known as a double underhooks pass (and probably a bunch of other things). The main difference is that you're putting your arms under both their legs instead of just one. Slip your arms underneath both legs and get a secure gable grip (palm to palm), or an s-grip (four fingers clasped together). If you prefer, you can instead grip their trousers and lock your elbows, or indeed their belt: the problem with those grips is that the loose fabric may provide them with enough space that they can make room to escape.

Whichever grip you prefer, you now want to stack your opponent, driving forward off your toes. To get them in position for stacking, the two basic methods are to either pull them up onto your hips using your thighs as a ramp, or move forwards so you're close behind them and they are rolled up onto their shoulders. If you don't get them stacked and therefore leave space between their hips and yours, then they can still use their legs to stop you, such as by hooking under your thighs with their insteps. They will also try to walk back on their shoulders to make space: stack them and remove any space to prevent them. Once you've got them stacked, the aim is again to push their knee right into their face.

At that point, the process becomes much the same as the smash pass, as like before, you'll grab their opposite collar with one of your hands, sliding your fingers inside. That is just one grip, as you could also reach behind their head. An even tighter option is to reach behind their head and grab the shoulder. Be careful you don't start neck cranking with a can opener, however, as that's illegal in most competitions for a reason. 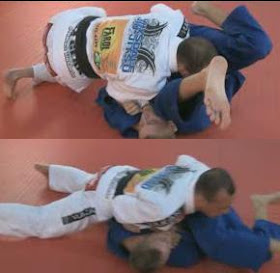 Move round gradually on your toes and/or press one hip into theirs to shift them to the side, and with the other hand hold the back of their trousers and lift their hips. Remember, it is important to keep maintaining heavy downwards pressure throughout this pass. Keep pushing until eventually you drive past their leg and transition to side control: don't raise your head, just keep pushing until you slide past. Alternatively, you can do what Abmar Barbosa does and drive off your feet to shove their legs out of the way.

Quite often, they will try to block your pass by bracing a hand against your hip. To remove that arm, bring your nearest knee either inside or outside their arm, pressing into the side of their elbow. That should collapse their arm. On the inside is easier: collapse the arm, trapping it with your leg, then slide into side control. If you go outside, you'll need to shift so that you slide towards their legs instead, keeping your torso low. Once you're passed, you can then readjust into side control.

Another option you should always keep in mind when passing is that you can always try changing direction and going around to the other side. This can be particularly effective if they are heavily committed to blocking your pass on one side. If you're able to quickly shift to the other side, they will probably find it difficult to reset and block that other side in time.
slideyfoot at 20:30
Share