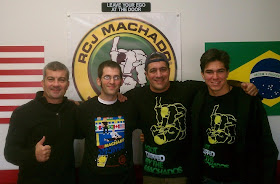 When I think Dallas and BJJ, I think Carlos Machado. That is not to say that there are no other good schools in the area - there are several, such as Pesadelo BJJ - but Machado is the pioneer. He arrived in 1995 at the behest of Chuck Norris, setting up shop on the set of Walker: Texas Ranger.

I've done some research into Carlos already due to my history piece on the RCJ Machado team in Jiu Jitsu Style Magazine #7 (back issues are available here, but they will eventually run out. There is also an iPad/iPhone etc app, plus various other digital options) and listened to lots of interviews, so it was cool to get the chance to interview him myself. His brother Roger was also there, as was his nephew (I think that's the relationship? John Machado's son, IIRC) Jean. Great stuff, which should hopefully be popping up in the next issue of JJS. :)

I also think Triin when I think Dallas, one of several friends I first met online who I was very keen to meet on this trip. She is an assistant instructor at RCJ Machado, which she somehow fits in between her kids and running my favourite gi company, Fenom Kimonos. Not only does Triin make brilliant female-cut gis, she also actively works to encourage and support women in jiu jitsu, with seminars, competitions and the like. There's more about what I did in Dallas in my full Texas write-up.

Clearly Triin has to be very organised to pull that off, which is reflected in her technical style of rolling and obvious interest in the fine details. Couple that with the considerate, mature approach to rolling I've noticed amongst many women in jiu jitsu along with the fact we're pretty much the same size: you then have an ideal training partner. It makes me wish I was training at RCJ Machado for a month, not just a day.

I also got to meet Triin's protege, Annemieke (interviewed over on the Fenom site here). She is a powerfully built woman, but at the same time is humble and conscientious. Describing her recent victorious competition, she did not crow over how she dominated her opponent: instead, she was more concerned with her much smaller opponent's safety. Which is awesome.

Her double-knee ride technique is also quite awesome, balancing both her knees on you, grabbing a leg and collar, then adding pressure. She was being nice when she demonstrated on me, but I can see exactly why she gets people to tap with that! ;)

The class set up was pleasantly informal, with no specific warm-up. Instead, people were using various methods of getting ready for class, particularly light rolling. That's what Triin and I did, which also gave me a chance to test out how my injured groin works in guard for the first time. I stuck to knee shield, as I was still nervous about using anything that would involve more torsion and/or pressure on my left leg.

I also played around with my favoured running escape: as I said when I last taught it, it's important to watch out for chokes. Triin's hand was sneaking around for chokes at several points, almost landing one later (I suspect she eased off, because I was able to spin out).

Getting on to the techniques, Adam taught us a tomoe nage sweep. Start by grabbing both an arm and a collar on the same side, then push your leg into that same side hip. Stretch them out to make them drive forward, also hooking under their other leg with your remaining foot. As they drive in, flip them over towards your shoulder on the gripped arm and collar side. When Adam demonstrated, he rolled through right into mount (though I kept ending up in half guard).

Next up was a loop choke, beginning from their attempt to do a standing pass. Get a cross-grip on their collar (so, your hand into their opposite collar), not overly deep. Use that to break their posture and pull them down. Chop your other over the back of their neck: your hands should form a loose 'X'. Raise the elbow of your cross-grip hand, and if necessary, weave your chopping hand under that elbow. From here, you can finish the choke.

While we were drilling, Ryan offered Triin and I a handy tip regarding finishing the choke when they seek an escape. If they try to spin out, follow their head with your own head. That should keep your body in the proper alignment, meaning you can still choke them. This is much easier than trying to think where to put your body, as your body will follow your head anyway.

I then did more sparring with Triin, who was continuing to be careful of my leg. We also got into several discussions, with Triin eagerly showing me a variety of cool technical details she likes. Some of that put into action what Carlos Machado had told me in the interview regarding visual cues he used when teaching. For example, 'holding the baby' when passing guard and keeping your elbows protected from spider guard. It makes me keen to take a private with Carlos some time, and until then check out his DVDs.

Triin also likes to trap their leg in between hers then sit. Another thing she likes to do, again as taught by Carlos, is keep her legs flat when under mount. That way, it is tough for the person on top to grapevine or otherwise get their legs underneath (e.g., I'm fond of Kev Capel's method for holding mount, where your cross your legs underneath their butt).

I played some more with the running escape, which opened up some other holes in my technique. Triin was in the middle of locking up a toe hold before I had any understanding of what she was doing. By the time I realised, she was already asking if it was ok for her to do a toe hold (presumably due to my injured leg). That's definitely something to be aware of under side control: as I would find out in a later Austin training session, to prevent it you need to be moving and 'running' with that escape, not staying too static as I often do.
slideyfoot at 20:30
Share