The next stop on my Texas training trip was Rilion Gracie Houston, taught by Rilion himself. I had a chance to rest on the Tuesday, using it to get some typing done, then on Wednesday Conor drove me down to train at Rilion's academy (Conor also took some pics, so I'll be adding those in once he puts them up). If you haven't heard Rilion's name before, he is probably best known for two things: Rickson once said he had the best guard in the Gracie family, and Roger trained with Rilion at a pivotal time in his BJJ career. He is known to be very technical, which always gets me excited as I love learning more about the fine details.

The warm-up was fairly standard, running round the room followed by some star jumps, press-ups and sit-ups. Rilion runs a relaxed class, although there were quite a few people in official Rilion Gracie gis with their name written on the collar. I had thought that was a Gracie Barra thing, but perhaps it's just an old school Brazilian thing (Roger does it too, and I think Renzo as well, but then they both have ties to GB).

Rilion's teaching was every bit as thorough as I had hoped. His process was to run through the whole technique once, with plenty of emphasis on details, then run through it again in even more detail. He also regularly paused to note that if you didn't grip a certain way, you were liable to get swept or lose your control. He described it as 'invisible jiu jitsu', something most commonly associated with Rickson but I've also heard Braulio use the term (he had a video series with the same name).

The technique was actually several techniques in sequence, beginning with a takedown. From standing, you grab their same side collar and go into a low stance, elbow tucked in. Pull on the collar and step, so that they will naturally step as well. You are waiting for the opportunity to drop to their collar-side leg for the takedown, depending on their footwork. Generally they will leave that leg trailing. When the moment is right, drop down into a sort of kung fu stance, with your same side leg bent, the other stretched out horizontally.

Wrap up their leg with your arms, hooking around the back of their knee with the outside arm, then behind the ankle with the inside arm. Jam your head by the inside of their knee. Pull their leg back as you drive forwards to put them on their back. Immediately move forwards to sit on the leg, so they can't simply pull it free by turning away from you and wrenching. You still have your arm wrapped behind their knee.

At this point, the technique moves on to passing butterfly guard, as most likely they will now insert a hook and try to sweep you. To prevent that happening, wrap around the outside of their other leg with your arm, below the knee. That enables you to provide enough counter-pressure that they can't lift you up with their hook. To being the pass, reach through to the bottom of their trouser leg with your other arm and grab the material, taking out any slack.

Drive your head into their chest to put them flat on their back: if you go off to either side, they may be able to establish some kind of control, so keep your head in the centre. At this point, there were a couple of variations to complete the pass, so I may be missing bits, but I think you next grab the collar, then move forward to crunch their knees towards their chest.

Move around to the collar grip side while shoving their knees with your hip. You also need to make sure you are still grabbing the bottom of their trouser leg and stretching it out. This should prevent them from shrimping out. Keep moving until you can establish side control. IIRC, Rilion also showed the option of popping your hips up and pressing down into the trouser legs in a bullfighter pass type motion.

Sparring was light, due to my injured leg and Conor also has a dodgy knee. He did a few takedown entries, then we played around with some positions on the ground, mostly side control and guard. I had an opportunity to work more top side control, focusing on trying out the Relson style some more, along with using my head to control the hips and getting my elbows into armpits for control. I was also grabbing the back of the trousers quite a lot, which was another useful grip to test out.

I wasn't able to do much in terms of passing, though I had a go at the technique we'd just learned. There was also lots of maintaining open guard, which has been a theme this trip (and tends to be something I do a lot when visiting a new academy, as I don't feel as comfortable trying to immediately drive forward and pass to side, not that I'm any good at passing anyway ;D).

Conor reminded me that when I'm in the running escape I have to be very careful they can't drive a knee across the bottom leg as then you're stuck. This is what Sahid does to me, so I need to work out a defence to that, or simply be aware of that control and keep the leg out of range. I attempted to block that control with my other leg a few times, but that potentially leaves me vulnerable to something else. 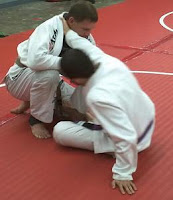 He also mentioned a simple arm drag type motion that can be done off an initial collar grip where you have your arm posted behind you. This is a position I find myself in quite often, but I haven't been using it to arm drag (or 'collar drag', which is more the case here). You simply move to the side and pull them down into the space you just left. Something I should be trying more often.
slideyfoot at 21:00
Share