This interview originally took place back in December 2011, with Carlos 'Escorrega' Lemos Jr, the 2002 black belt Mundials champion. This is edited down from a much longer audio: I'll be putting it up in three parts over the next month or so, interspersed with a review or two. :)

slideyfoot.com: I have read that you trained in judo before beginning jiu jitsu. What impact has that had on your style?

Carlos Lemos: I started with taekwondo, when I was four years old. There are pictures of me, on this video biography they did on YouTube, with old pictures when I was just a cute boy. Something happened along the way, I don't know, something went wrong. [laughs]

Judo I started when I was ten. I think I'm a frustrated judo fighter, because after many years, I got back to judo when I moved to the UK. When I was in Sutton Coldfield, I found a local judo club there, Erdington Judo Club. They're very good, many national players. I got to train with those guys and felt truly blessed.

I really believe that judo and jiu jitsu is the right combination. I will even make a prediction: the next evolution in UFC will be the fighters using more and more judo throws. More and more, you will see people using hip throws and foot sweeps.

Where I live in Chicago, it is one of the three top states in wrestling in America, so all the wrestlers over there are really good. So when I fight, most of my fights I'm going against collegiate wrestlers. I think it is a big mistake for Brazilian jiu jitsu fighters to try and prepare for the cage with a wrestling camp. Wrestling is based on power and explosion: our muscle memory as jiu jitsu fighters is not the same. 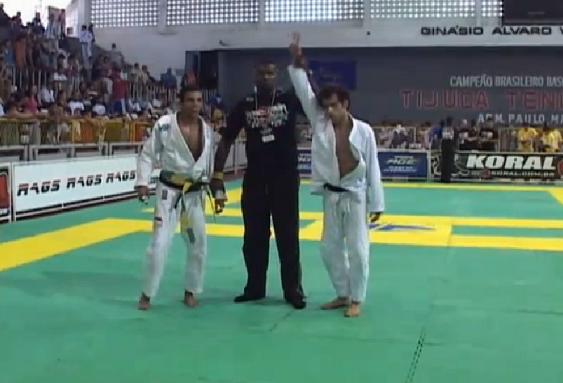 Most Brazilian jiu jitsu guys I see in MMA, by the time they take their opponent to the ground, they're exhausted. Or even worse, after two or three sprawls, they can't get the takedown. They go the ground and have nothing left. For a jiu jitsu fighter, the strongest weapon is the ground, so it is necessary to get to the ground fresh. Judo gives you that, because it's about footwork, taking your opponent off-balance, hipwork: it's everything we do on the ground.

So, I've been training a lot of judo to fight wrestlers in MMA.

slideyfoot.com: There has recently been some controversy over the knee reaping rules used by the IBJJF. There have been complaints that they are too vague and that this rule is being abused, with people intentionally pushing their opponent's foot over their hip. Do you have a view on that?

Carlos Lemos: I do, yes. Look, I don't think that is the coolest thing in the world. The way I teach my students is this: our art evolved on the battlefield. Jiu jitsu, back in the day, was a way to fight, a martial art. With the advance of sport jiu jitsu, people have started to play more and more games and rules that would be favoured by the ruling system. So, it works in a sport jiu jitsu match, but I like to teach my guys what they can use in a real fight. Before everything - before being a world champion, an Abu Dhabi champion, a whatever champion - I think you shouldn't forget it is a martial art and you're responsible for a legacy, a legacy of efficiency on what you teach and what you play.

What I teach my students are the basic principles of Gracie Barra jiu jitsu, which will eventually – if you have to get into a fight – you won't feel surprised, whether or not you have a gi. Your jiu jitsu will work regardless. So I think this whole new game, this and that, they're cool and they work for competitions. But I don't like that, I don't like to play that. I've studied it a lot, I've broken it down with my friends, but I'm a guy in love with the past. I am a great admirer of the past.

People nowadays, they love what is new. I love what is old. I've always been like that, since I was a kid. I'm a self-taught historian, I really research history. So I think the good, old, bread and butter jiu jitsu is what works. The IBJJF, they are doing a really good job in regards to fights with time limits. If we talk about the rules, they are far from the ideal rules, because I do believe – and I'm quoting my master – the best rules are no rules. But to do that, the matches, it would be impossible to run a really huge tournament.

It's hard, but I think they are trying to make these rules closer and closer to perfection. However, just extending your question a little bit, what made us so good in jiu jitsu is that we didn't forbid many movements in our art. Historically in jiu jitsu, we would initially have trouble with something, something new that would come, but in a few years people would have deflected that with something simple, a technique that is part of the basic curriculum. Then the art evolves.

This is the same thing as when jiu jitsu fighters started to fight wrestlers, we were having such a hard time, it seemed like the wrestlers were taking over. Nowadays, we see it is not like that anymore, we have levelled that. When you see jiu jitsu fighters against wrestlers, they are giving them a hard time. That's because we never say "ok, no-one can go for a double leg right now in jiu jitsu". That is what killed the art of judo. In the past, judo was very close to the jiu jitsu we initially learned from the Japanese. We came from the same lineage of Jigoro Kano. However, the Gracies said no rules: let's make our rules what works. What works, we keep, what doesn't, we remove. 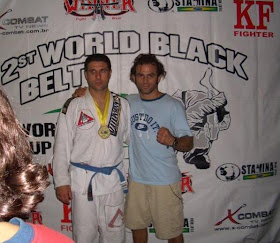 Judo is different. "Ah, right now everyone is going for a double-leg. Ok, the double-leg is abolished from judo." That's what killed their art. It is still a great sport, I practice judo and I love judo, but I think what defines our art was we always allow these things - even if they're not the prettiest or look the best – to be played in our sport, so we can evolve and become better.