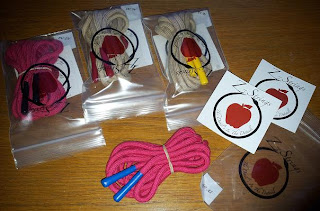 Short Review: If you've had problems with the traditional flat drawstring, then the Z-String may be a welcome step-up in quality and practicality. Speaking personally, I have never had any issues with the flat drawstring, but I know there are those who find that it bunches, particularly when wet. You may also simply enjoy customising your gi, in which case the range of four colours available from Z-Strings may appeal to you. Finally, it obviously works as a replacement string if the one on your trousers has broken. Available from the Z-Strings site for a slghtly expensive $10 each, here.

Full Review: In the years I've been running this website, I've both read and written plenty of gi reviews. Invariably, reviewers will have a preference for either the classic flat drawstring or the more recent round bungee cord. Generally speaking I've tended towards the traditional drawstring, but I don't have a strong opinion either way. An increasing number of the gis I own have a cord, which has worked just as well. The only irritation I've had so far is that sometimes the cord is far too long, meaning that it dangles down to my knees before I tie it up. Due to that length it's vulnerable to getting yanked and therefore becoming undone.

Actually selling the gi trouser cord separately, with a range of different colours, is an interesting concept. It reflects the increasing fashion element present in BJJ gis, which has accelerated over the last few years. This is despite the IBJJF attempts to clamp down on any divergence from the standard gi, with increasingly draconian and sometimes haphazardly applied rules at their competitions. The ridiculous scenario of forcing somebody to buy a new belt because it is the 'wrong shade' stands out. 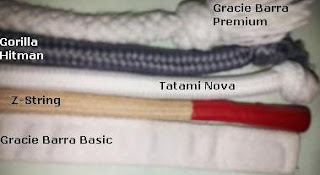 As merely one tournament provider among many, the IBJJF fortunately does not have any executive power outside of its competitions, although its influence is difficult to completely ignore given that a medal from the IBJJF Mundials remains the most prestigious for a gi competitor. I'm not aware of any rules dictating gi cord choice, but it would not surprise me if the IBJJF imposed restrictions, should variety become more common. Either way, the Z-String is supposed to be an improvement on the classic flat drawstring, designed to avoid bunching, stay tied throughout a training session and provide customisation options to those who are so inclined.

The Z-String was created by David Zwanetz, a lawyer who trains at Crazy 88 in Maryland, a team previously associated with Lloyd Irvin. Zwanetz has assured me that the Team Lloyd Irvin affiliation no longer exists and that Z-Strings has no business connection to them or indeed anybody else. Nevertheless, he does continue to train and teach at Crazy 88, with a team logo on the Z-Strings website. If you're unaware of why it is important to ask that question, read this factual summary and this piece of investigative journalism regarding the deeply unpleasant revelations that have come out about Team Lloyd Irvin over the last few months.

Update June 2013: Judging by the 2013 Mundials, it would appear that the Team Lloyd Irvin affiliation is still active, as per this discussion (Update Dec 2013: Unfortunately, somebody has seen fit to since delete that discussion). It would therefore appear that despite all the disturbing revelations about Team Lloyd Irvin, Crazy 88 still sadly represents TLI. I should add that this is not something entirely supported by the average Crazy 88 member, as per Georgette's post, who don't want to be sullied with the Team Lloyd Irvin name.

Up until I received these gi drawstrings, I had no idea how to re-string a pair of trousers. The process is described fully in the video at the bottom of this review, embedded from the Z-Strings site, but for those of you concerned about bandwidth, I've put up some pictures. Taking it step by step:

1. Get a wire coathanger. Pull it straight, then create a loop at both ends by squashing the hook. Tape up any bits that stick out and could potentially snag on cloth.

2. Remove your current drawstring from a pair of gi trousers by pulling until you are able to pop the end out of the opposite side of the trousers, both on the front and back. If there is a thick knot, it will take a bit more force. 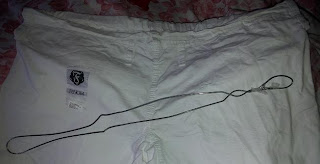 3. Put the coathanger through the front of the now-stringless trousers, so there is a loop sticking out of each end.

4. Wrap some of the new string through one of the loops. 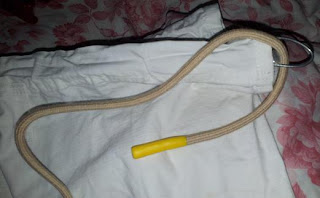 5. Pull the coathanger out the other side of your trousers, until the end is fully fed through. 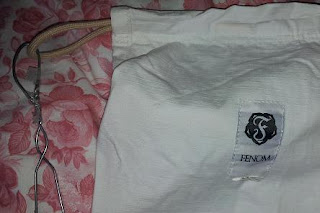 6. Put the coathanger through the back of the trousers, again with loops visible.

7. Insert one of the ends of the threaded string into the nearest loop. 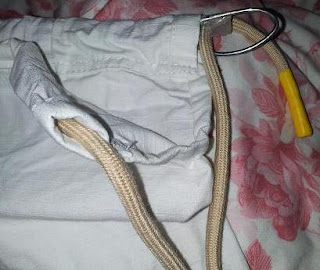 8. Pull the coathanger out of the other end of the trousers.

9. For a final time, insert your coathanger through the back of the trousers. Make sure the loop is visible on the non-threaded side. 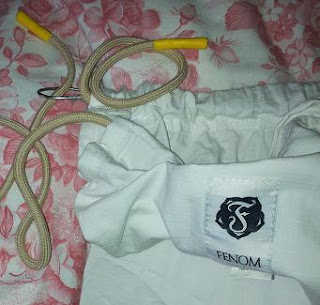 10. Put the final non-threaded end of the string in the loop, then pull it out the other side. 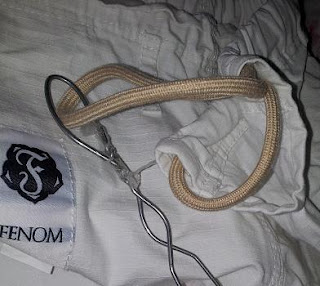 You now have a beautiful newly strung pair of gi trousers. Pink floral bedcovers are optional. :)

The colour range is red, navy blue, white or 'neutral', which is basically beige. In the pictures on the website there appeared to be a black version too, but either that's me being colour blind or it was discontinued. For the rope tip Z-Strings has a broader choice of colours: red, black, blue, purple, yellow, brown, orange, green, white and pink. That tip is no wider than the rest of the cord, so you'll need to be careful it does not slide straight back through the trousers. This is in contrast to all other gi bungee cords I'm familiar with, which have a thick knot at each end to prevent that from happening.

The sizing is not as diverse as I might have liked, given that they are grouped into kids, A0-A2, A3-A4 and A5-A6. I dislike a long rope, but therefore had to go with the A0-A2. A true A1 would have fit much better than something designed to also fit somebody larger than me. I would guess that is a demand issue: perhaps more sizes will be added in future, if and when the market for Z-Strings expands.

Zwanetz claims in his video that the rough texture of the string will stop it coming untied during class. Up until now, it has lived up to that claim, unlike some other bungee cords which I've found regularly come loose. I would therefore have to concede that the extra length does not seem to have made it equally vulnerable to coming undone, at least in the few weeks I've been testing them up until now.

At $10 (£6.50 at the current exchange rate) the Z-String is perhaps a little overpriced for a length of cord, considering you can get a good quality pair of gi trousers for $25, but not excessive. If you have a flat drawstring you want to replace and enjoy customising your gi, this may be a good option. Available from the Z-Strings site, here.