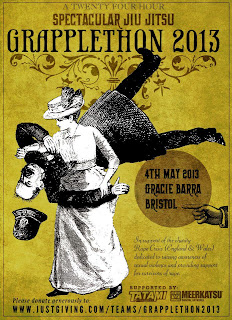 After three months of planning, the GrappleThon in support of RapeCrisis is this Saturday! I've been very pleased with how the fundraising has gone so far: we've already doubled the amount we raised for Meningitis UK last year, which I'm assuming is because the issue of rape has (rightly) been very high profile in BJJ since the start of this year. It's not too late to donate: please go here and spare as much as you can for a fantastic cause. :D

Watch the GrappleThon 2013 LIVE from 9am Saturday 4th May!

Like last year, the event will be streamed live. This time round, we're going with uStream rather than Justin.tv: the link is here. It would also be worth following my Twitter here, in case anything goes wrong with the stream. I'll be tweeting regular updates throughout the 24 hours, again just like last time. If you haven't already, you can also join the event page over on Facebook, which has a few more details regarding address and the like. I look forward to speaking with you on the live stream. ;)
________________

The windscreen wiper sweep is something I was first shown by Ciaran at the Belfast Throwdown. That's also the terminology he used: as I think it's the most descriptive I've heard, I have continued to follow Ciaran's lead on that ever since. I next saw it demonstrated on Andre Anderson's closed guard DVD, where he called it the 'Rey Diogo sweep', after his instructor. John Will does something similar he dubs the 'bearhug ankle lift', except that his grips are different. Nic Greogiades included it in his 'big class' at GB Bristol a while back, when he called it the 'Xande sweep', due to Xande having also used it regularly in competition.

I kicked off with a 'basic' version, with a couple of grip variations. Start off by grabbing the same side wrist (alternatively, you could grab the elbow, or use John Will's method where he grips over the back, making sure to trap the arm and prevent them posting). You also need to grab either the outside of their knee or the lower part of their trousers. Be careful, as if your opponent knows this sweep, they may post their other leg out to stop you.

Before they can do that, put your same side foot by that other leg, keeping it tight so there is no room for them to wriggle. Anderson prefers foot on the hip, but personally I find that difficult to pull off: still, be sure to try both versions to see which works best for you. Next, kick your foot on the trouser-grip side up into their armpit, aiming to curve their body away as you do. Swing your head around (so that you're looking at your knee: same principle as with Ryan Hall's version of the triangle). To finish, kick forward with that leg, lifting the trouser, then roll through into mount.

I then moved on to Dónal's version, as per the private lesson from a few weeks ago. Grab the cloth then turn your hand inwards, pressing your knuckles into the side of their forearm. Just like when they sit on their heels and make the trousers too tight to hold, by turning your hand in their sleeve becomes tight and restricts their movement. They can no longer easily circle their hand around to break your hold.

On the sleeve grip side, put your foot on the mat by their leg, keeping it tight so there is no room for them to wriggle. You could go straight for the windscreen wiper from here, but Dónal uses a combination instead: he starts off with a sit-up sweep. Angle your hips slightly towards your sleeve grip, then shove their arm into their other hip. Do the sit up sweep as normal, coming up diagonally towards the knee grip side and bumping into their hip. Their natural reaction will be to press forwards to prevent your sweep, which sets you up perfectly for the windscreen wiper (if they don't push back, simply continue the sit up sweep). On the knee-grip side, kick your leg into their armpit, curling it around their back as you do. It's important that this leg stays tight to them, right from the moment you do a sit-up: imagine that leg is an arm, which you're using to hug them tightly.

You'll drop back slightly too. In order to do the hip bump, you'll have probably come up on your elbow. Don't drop straight back down. Instead, angle off in the direction of your knee grip, moving the shoulder of your posting elbow across. Your leg should end up across their upper back, the foot near their opposite shoulder. Kick the leg forwards to knock them over, thrusting up with your knee grip arm, then roll them into mount.

Keep hold of their leg and sleeve, also extending the sleeve forwards. Holding the leg makes it hard for them to bridge, while holding the sleeve and straightening the arm could lead directly into a submission, such as an americana. To further help with that, slide your knee up on the sleeve grip side, so they can't bring their elbow back to their side.
________________

Teaching Notes: Based upon some feedback Mike sent me, I shifted the end of the lesson around, so that stretching is at the end rather than the technique review. What Mike said makes sense, as doing more techniques after stretching does somewhat go against the point of stretching out and relaxing at the end of the lesson. Again, please send me feedback if you're reading this: I may not always implement it, but if I don't, I can guarantee I'll at least tell you why. ;D

A few people found this sweep a little complex, which is to be expected: I've been struggling to land it myself. However, I think it is worth sticking with, as once you've got it down it's a high percentage, low risk sweep. I also find it much easier than the flower and pendulum sweeps: although they are generally seen as 'basic' techniques, I've never managed to get them to work well for me.

I didn't get any sparring in, unfortunately, as I decided closed guard sparring fromt he top probably wasn't a good idea for my injury. That still hasn't gone away, though it is much reduced. Annoying, as I wanted to be fully fit for both the GrappleThon and my US trip in June: we'll see how it goes.
slideyfoot at 15:16
Share