Straightforward class today on moving from side control to mount. Dónal was able to find yet another application for his favoured back step, this time as a starting position from side control. From there, grab your foot, pulling it towards you slightly (but not to the extent that you're twisting yourself up painfully), then shove it across to their far hip and establish mount. This should avoid them snatching half guard, as can happen when you swing your leg over. It also makes it easier the get past their blocking knee. Personally, I prefer sliding the knee over the belt line, but this option is totally legit as well.

Sparring was specific from mount, where on top I was looking to maintain position and scoop up an arm. As my partner wasn't wearing a gi (most of the students at Hit Fit have crossed over from the MMA class), that meant I didn't have any of my preferred choke options. I should have therefore switched to focus more on the arm, such as Verhoeven's tips on landing the americana.

I did go for an armbar at one point, which I almost never do, because I don't like the risk of losing position (exactly what happened). Still, it's good to practice that occasionally, even if it isn't among my favourite options. I think I got a RNC when they turned over later on, but then they have only been training BJJ for a month or maybe less: a few more months and I'll find that much harder to land. ;)

Underneath I went with my usual heel drag escape, trying to also give them a chance to work on position. It was useful for me too, as they were a good bit bigger, but I should have thrown in the Verhoeven variation on the elbow escape to mix things up. Then again, Dónal has been sticking to a theme in classes: if it is mount for the next few weeks, I'll have plenty of opportunity to work on my other mount escapes. 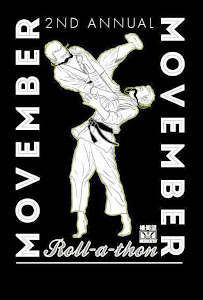 For the last minute or so, Dónal had us get our favourite mount position and then try to escape, before switching. On top I'm fairly confident about holding, especially if there is an experience gap. I was looking to try the escape to butterfly underneath, but ended up throwing them off almost bench press style: I think they were a bit high and overbalanced. Again, with more experience that won't happen (though with more experience, they will probably be attacking my collars a lot more, making the escape to butterfly increase in risk).

Movember is progressing nicely: if anyone wants to follow my Mo for some reason, I've been posting daily pictures on my Mo Space. If you want to throw some money at that page, it's all going towards the Gravity BJJ Movember Rollathon. ;D
slideyfoot at 21:57
Share