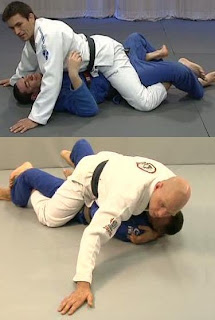 There are two basic types of mount to choose from, which I'll call low and high. Once you've achieved mount, I find that low mount provides the most control. First off, you want to immobilise their hips, as their main method of making space is to bridge up forcefully.

Bring your feet right back, threading them around their legs to establish two hooks: this is known as a grapevine. Alternatively, you can also cross your feet underneath, which has the advantage of making it much harder for them to push your hooks off. Your knees are ideally off the ground, to generate maximum pressure. How far off the ground they are depends on your dimensions: the key is getting loads of hip pressure. Another option, which I learned from Rob Stevens at Gracie Barra Birmingham, is to put the soles of your feet together and then bring your knees right off the floor.

Whichever option you're going for, thrust those hips into them, using your hands for base, where again you have a couple of options. Either have both arms out, or put one under the head (remember, you can always remove it for base if you're really getting thrown hard to that side) while the other goes out wide for base. Try to grip the gi material by their opposite shoulder, or even better, by the opposite armpit. Keep your head on the basing arm side, loading up your weight there. If they're bridging hard, you can switch from side to side.

A basic escape is to trap an arm, bridge and roll. So, don't let them grab your arm and crush it to their side. Instead, swim it through, like Ryron and Rener demonstrate in the third slice of the third lesson in Gracie Combatives. Be sure to do it one at a time, or you may get both arms squashed to your sides.

The drawback to the low mount is that there aren't many submissions from there: the ezequiel is one of the few high percentage attacks. In terms of their defence, they are mostly going to be trying to unhook your feet and digging their elbows under your knees, so you'll be battling to keep those in place.

Teaching Notes: Although I managed to remember everything, I think I rushed through the demonstration a bit, as it didn't feel as coherent as I wanted it to. Next time, I should remember to bring in that jnp framework I like, which helps to structure the teaching. I threw in details on swimming your arms thought and pulling up the elbow, but that also felt like it didn't fit as well as it could have. They are both useful points to know for low mount, so I could try rejigging my teaching to add them more effectively next time.

I changed the lesson structure a little at the end, in regards to sparring. Normally I just go with specific sparring, as when I only have an hour I think it's important. However, a few people have mentioned they would like more sparring (via Dónal), so I wanted to make sure I started adding in some free sparring. My compromise was to have free sparring, but starting from mount. That way there is still some of the focus from before, but it puts that focus in context, which is hopefully useful. :)
slideyfoot at 20:30
Share