The time has come for another GrappleThon, this year at a new venue. Dónal and I co-founded Artemis BJJ back in January: since then, we've been running classes at the central Bristol Sports Centre venue on Mondays and Wednesdays. Before and after we set up our club, we'd also been teaching at an unusual gym in Bitton (involving locked gates, llamas and Noel Edmonds. No, really), the old venue for local fitness gym Hit Fit. The owner, Mark, mentioned that he would be moving to a swish new location once the change of use was confirmed in late February.

I decided to take a risk and arrange the GrappleThon to coincide with the opening of the new venue, so it could act as a sort of launch event. In February I started to get things in motion, setting the date as 12th April, because I was completely booked up the rest of March and April. That gamble didn't quite pay off, because once it got to April, it turned out that the venue was not going to be ready to officially open until May. Mark was kind enough to let us go in there early to stick with the advertised time, despite the fact that he and his team were super busy with preparations to get the gym ready.

[Incidentally, there will indeed be a Hit Fit launch event involving charity, on the 3rd May from 10:00-17:00, so be sure to check that out if you're able to pop along. I will still be in the US so unfortunately can't make it, but to find out more, here is the Facebook event page. They're raising money for the Lullaby Trust: there's a JustGiving page that was linked on that Facebook page, here.]

The inaugural Artemis BJJ GrappleThon is in support of local charity Kinergy. They provide professional counselling to survivors of sexual abuse and rape, helping them move on with their lives. The reason we went with them, aside from it being a worthy cause, is that Dónal is a Kinergy counsellor. Here is what he had to say back in February about how Kinergy make the world a better place:

It’s an amazing charity with 22 volunteer counsellors that see up to three clients every week. Kinergy offers a year’s free counselling and is open to everyone, regardless of location, age or gender. It’s hard to put into words how amazing it is at Kinergy.

The waiting list is a year long: due to the lack of funding, Kinergy was forced to not take on any more referrals. It is hoping for more funding to support the service and create more referral opportunities.

Some clients come to Kinergy trying to deal with the indescribable levels of abuse they have faced, attempting to express themselves and gain some sense of what happened. Kinergy can give clients the tools to support themselves in the future.

The counselling can potentially be a huge step for a client. I have met many clients that feel they can’t speak out to get the support they need. Some abuse is hidden and spreading this message of support, even if it only reaches one survivor, could be life changing for that person.

Just like every year, the support of Seymour 'Meerkatsu' Yang and Tatami Fightwear was absolutely invaluable. Seymour came up with another brilliant t-shirt and poster design, while Tatami generously printed the t-shirts for the third year running. Seymour then went a step further and sold 10 prints of his beautiful 'Heavenly Wristlock' rashguard design, with the profits going to Kinergy. The aim was to raise £500: there was a slight shortfall of £40. Most people would have just shrugged and sent in the £460 (as after all that remains a considerable donation). Not Seymour. He filled the gap from his own pocket.

Numerous people contacted me beforehand about bringing down teams from around the country. My response is always "the more the merrier": I love the way that GrappleThons can bring people in the BJJ community together, so we can all both make new friends and renew ties with old ones. There were BJJers who headed down from Northern towns Congleton and Chesterfield, a Welsh contingent from over in Aberystwyth, plus a few teams from around London (like Horizon BJJ). 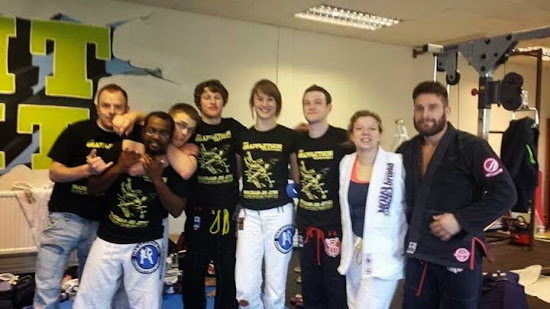 There were others who decided to drop in on their way to the Welsh Open, like two grapplers from Impact Martial Arts Truro, then later a father and son duo who train with Seymour at Mill Hill. MMA commentator, purple belt and 'Top Control' podcast host Josh Palmer headed along too. Representatives from most of the local Bristol gyms were there too, something I always enjoy seeing: I've never been a fan of the tribalism that can sometimes blight BJJ, so it's brilliant to see people just coming together to train and help raise money for a good cause. :)

A lot of grapplers were crazy enough to commit to the full 24 hours. Anne Birkett and her Westcoast BJJ crew were the largest group, with some impressive fundraising meaning that they all earned t-shirts, seeing off some stiff competition. Anne could be seen bouncing around the venue for the majority of the event (I especially enjoyed her 5am dance-off grapple with Paula) while Kris kept us all going in the quiet hours of the morning between around 2am and 7am. I don't think he stopped grappling over those five hours!

Shane (2.0, bigger, beefier and beardier) was back too. Having rolled for most of the last GrappleThon, he repeated that same level of involvement. Not only was he constantly rolling, as an experienced purple belt he was giving out lots of advice to the less knowledgeable grapplers. All he needed was to occasionally collapse face down on the floor and sleep for a few minutes, then he was ready to jump back in. ;)

Paula and Tanya were two other returning veterans, going for the full 24 this time: my old training partner Pippa embarked on her second coach mission from London. They were among a huge number of women who came along to support the GrappleThon, like Jodie Bear, who has had an inspiring journey in BJJ. Her wrath at Subway could only be temporarily contained during a brief hibernation. Judging by Facebook, as soon as she drove back up the country, the first thing she did was go wreck a Subway. Well, that or go roll: either way, far too much energy! ;P

There were lots of other female grapplers heading along for the first time. Rachel, the champion fundraiser for this event, not only drove all the way down from Chesterfield, this was her first time ever sparring outside of her club. She was only planning to spend a couple of hours originally, but impressively managed to at least double (triple?) that initial slot. Well done Rachel, on both fronts.

As happens with any event you plan in advance, a few people unfortunately picked up injuries before the big day, but a number still turned up anyway to support. I certainly don't expect anyone with an injury to make it all the way down to Bristol, as it's totally fair enough if they stay at home to rest up and recover. That's what I would probably do myself (I'm a confirmed wimp). Hiren ignored his busted wrist to get in some grappling, Anne herself had messed up her neck, Geraldine was there with her bad back. David popped a rib so couldn't train (he still tried!), but came along to help out anyway.

For me, it was my first look at the new Hit Fit venue, in the process of being readied for its official opening next month. There is a decent mat space and - as of this weekend - two cool murals on the walls, painted while we watched by a skilled Slovakian artist. Rather less artistically, I went on an Instagram spree this year, something I hadn't started using by the date of the last GrappleThon. I set up a GrappleThon specific Instagram, so that's full of pictures from the day. I was using it to update on the hour, as well as try and make up for my rather limited pre-event directions...not that I wouldn't know where the venue was, that would be silly. Ahem.

Thanks to everybody who came down to take part, especially all the fundraisers who did such a great job of getting in donations for a fantastic cause (at the time of writing, we're close to £5,000: donations still welcome on our JustGiving page :D), and thanks again to our sponsors Meerkatsu, Tatami Fightwear and of course Hit Fit, for letting us use their gym even though that meant we were rolling around right as they were trying to finish off their DIY. Thanks also to Sarah from Kinergy for bringing us that lovely box of chocolates, plus the delectable lemon and ginger cakes brought by another supporter (who also put in a load of very generous donations on JustGiving). :)

As usual, I'll also put down my sparring notes: I definitely rolled more this time than in the previous two years, though that still probably doesn't amount to more than four hours total over the whole 24hrs, maybe five. The usual themes from the last year or so keep cropping up. I'm still relying on the running escape way too much, rather than trying the basic guard recovery and turn to knees first. I'm also not yet managing to effectively combine with the stiff arm escape: I think I managed that once, but there was a reasonable weight discrepancy.

Like Kev suggested with the running escape, I continue to look to control that far arm, but with higher level grapplers like Shane, their arms almost immediately snake past the elbow I'm trying to block by my hip. That messes up the escape, so it then becomes a battle of digging their arm back out. Marcelo does the hip swing escape to guard with the arm still in, like Jeff Rockwell showed me in Texas a couple of years ago (sort of, as part of another technique), but I have yet to do it successfully without clearing their arm.

In guard, especially open guard, I'm getting passed too easily by anyone experienced, who tend to either leg-drag me or otherwise control my legs and slip around. I would have thought that is partially because I'm not threatening enough with sweeps, plus I'm also not doing a good job of combining attacks. I went for the windscreen wiper repeatedly without much luck (even if they were smaller than), possibly because my angle is poor and I'm telegraphing it too much. I tried Kev's grip break to back take or sit-up sweep (if they pull their arm back), but again not much luck there.

The back remains a weak position for me (both attacking and escaping), though that lockdown from the back thing Kev showed me recently is fun (but it does depend a lot on leg proportions and flexibility). A few times, I was able to wriggle back into half guard when escaping and I had a few attacks going from the back, but I don't think I actually landed any. And again, I was mostly sparring smaller people, so it's not because they were using any Hulk strength to resist. :)

I'm looking forward to organising the 2015 GrappleThon at Artemis BJJ: I already have a date, venue and charity in mind, so will get planning that in a while. Probably early in the year again. 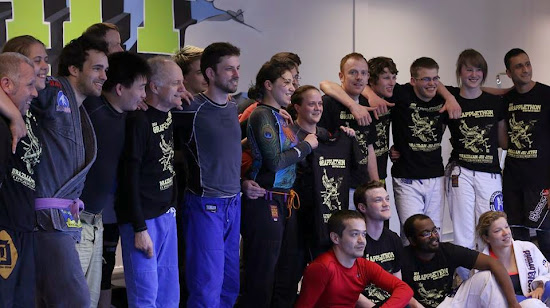