After arriving from Virginia, I was originally planning to be in Austin for four full days, but due to how the flights worked out it ended up being three. Nevertheless, it was cool to be going back, as I had such a great time in 2012. The flight from Norfolk, VA was simple enough, though I did get worried when the pilot started saying something about the weather affecting flights. Fortunately for me, it didn't cause any problems getting to Dallas: I arrived on schedule and easily made my connection.

I saw Austin as my 'home base', because I already knew from experience that Georgette was an incredible host. After she picked me up from Austin's airport, there was a Fenom gi waiting for me and my exciting new trousers from Clothing Arts. Yes, I get excited at the prospect of new trousers, especially when they have so many pockets! :D

I was great to catch up with Georgette over the next few days, as well as revelling in the the wonderful smell of her house. I don't know if it is the washing powder, the Yankee Candles or some kind of magic Ausin scent, but my clothes have a fantastic aroma for weeks after I've stayed at the Georgette residence. ;)

Mitch was also very hospitable, just like last time, driving me to various spots in Austin. The first one was Mikal's new jiu jitsu venture, Aces Jiu Jitsu Club. He has an excellent facility and a cool group of students. Mikal showed Mitch and I around, then we hung out for a while before class, Mikal filling me in on how he'd gone about setting up the new school.

After class, I headed to a local park with the students, where they put down a mat and got in some rolling right there. The weather was hot (at least by my UK standards), perfect for taking a dip in the nearby river. With lots of Austinites in their swimming gear, the massive abundance of tattoos was made clear. I've long wanted to get a second bit of body art and being in Austin encourage me further. There is a cool 'alternative' vibe in Austin, which come to think of it is there back home in Bristol too. I later trained with Georgette at the spacious Gracie Humaita Austin school, a place I almost felt like I already knew after reading so much about it on Georgette's blog. 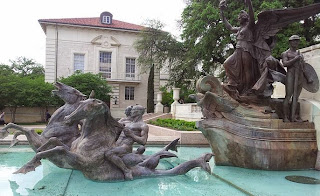 On the Wednesday I walked over from Georgette's office to the University of Austin campus. Last time I visited was in November out of term-time: in April with all the students there the atmosphere is a lot more vibrant, as you would expect. Jesse, who I first met in 2012, showed me around the area, wandering up the clock tower and enjoying the various bits of art dotted around campus. There is a large statue in a fountain, which I think is some kind of commemoration of the United States entry into the First World War, judging by the 1917 date and the military helmets on the statues. Either way it was fun to speculate.

I also got to add to that expanding category, 'bloggers I have met in the real world'. This time it was John from the ILoveLegLocks blog, who has moved back to Austin from Korea. He is studying for a Masters at the university, so it was rather fitting that we then had a look around the Ransom, a museum based on campus. Entry is free, with a cloakroom type thing behind the desk. It's just a load of large shelves with dividers (enough space for an average size backpack), but John assured me that he often left his stuff there: appears to be fairly safe.

They have a number of interesting exhibits, including a Gutenberg bible and what is apparently the first ever photograph. If I remember the display correctly, it was taken in France during 1826. The picture is difficult to make out, as not only is it blurry, it's housed in an area without much light, to avoid damage. However, you can tell from the captions and the reproductions outside the dark area that it's a view from a window, showing a house. 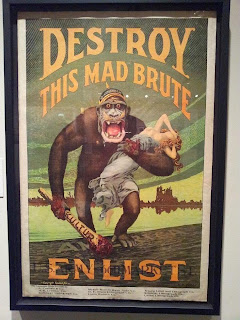 A more extensive exhibition was dedicated to the posters and propaganda of the First Word War. I studied the two World Wars for GCSE history and recognised a number of them, especially the 'mad brute' by Harry Ryle Hopps, demonising Germany. Interestingly enough, that image was sufficiently infamous that Goebbels reprinted it in 1939, titled 'the old hatred, the old goal'! He meant it as an indictment of American slander (the alleged Belgian atrocities referenced by the original poster were not well founded in fact, from what I remember of my GCSE), but given the horrors Goebbels initiated, the line could be interpreted rather differently. The material in the exhibition was from various countries, mainly the USA and UK, with a few from Germany too, IIRC. Either way, well worth checking out if you have any interest in World War I.

On the last day I met up with jnp from Bullshido, who gave me a load of great advice about BJJ in 2012. Unfortunately he has picked up an injury so we weren't able to train this time, but that didn't matter as John is a brilliant conversationalist. I always enjoy hanging out with him, and also enjoyed being a brief part of the tight-knit community where he lives. :)

Georgette was also injured, so we weren't able to roll that day as we'd originally planned: my own fault for not taking the chance to join the sparring class the day before. Then again, it just means I've got another great reason to visit for a third time in he future. I did at least get to train for a third time in Austin, on the University of Texas campus with John T.

On Friday, Mitch drove me back to the airport, where I was once again flying to Dallas, before getting my connection to West Palm Beach in Florida.
slideyfoot at 11:25
Share