Both my friend and I are Game of Thrones fans, like pretty much everyone else in the world. Although the violence is frequently over the top and the 'sexposition' is irritating, it's carried through by a great plot. It's also full of beautiful locations. Partly that's down to CGI, but the series also draws on the wealth of historic cities around the world that look much the same today as they did hundreds of years ago. Arguably the most important city for the show is Dubrovnik in Croatia, which has doubled as Kings Landing from the second series onwards (the first series relied on Malta, where I went a few years ago.

Therefore when my friend booked a holiday to Croatia, I was keen to check out the Game of Thrones filming sites. I assumed there would be loads of guidebooks and official series companions telling you exactly where it all was. To my surprise, I found nothing when I looked around in 2014. There were a few guided tours, but they didn't seem good value-for-money. So we decided we'd just do it ourselves, taking it on as a project.

As it took a lot of work, I thought I'd try sticking everything we had done into a short Kindle book, considerably bolstered by my friend's photography and editing skills. I've no idea if anybody will ever buy it, but that will be sitting on Amazon (in the US, you can pick it up here

). It covers off places like where Jamie trained with Bronn, the arena in which the Mountain and Oberyn fought, the gardens in Qarth and lots of other filming locations. If it does ever sell enough (only £1.99! Ooo) to fund another Croatia trip, I'll do an update, but that's a huge if. ;) 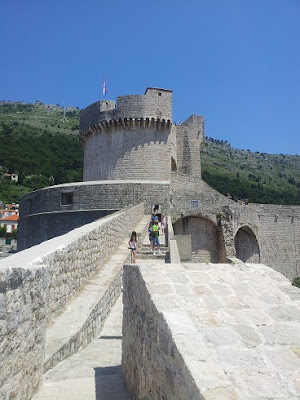 Although the majority of the content I'd normally put in a travel write-up is therefore in that book, I still wanted to do a quick summary on the blog. Flying in from Birmingham with Monarch Airlines on a 14:25 flight, we arrived roughly two hours later. The airport in Dubrovnik is pretty small, so getting through was straightforward. Head out of the exit doors past baggage claim, then if you turn to your right you should find a shuttle bus. Tickets are available from the Atlas desk inside, which in June 2014 cost 35HRK each. After around fifteen to twenty minutes, we arrived at the Pile Gate, the main entrance to the old city.

From there, we walked up to our accommodation at Room Kala (£100 total for three nights). It has a great terrace looking out at the medieval city walls, plus you get your own bathroom and a hallway with a large sink for washing up (handy for breakfast too). The only downside was a climbing all those steps to get back there every night, but then that's why you end up with such a great view. ;)

Dubrovnik isn't huge and all the large towers make it easy to orient yourself. I particularly enjoyed strolling along the medieval city walls (much more on that in the book), which like most of Dubrovnik are incredibly well preserved. I'm not surprised the Game of Thrones crew picked it, managing to match their previous choice of Malta. As you would expect, Dubrovnik is rammed with tourists (no doubt increased by the GOT factor), so you'll want to get up early. 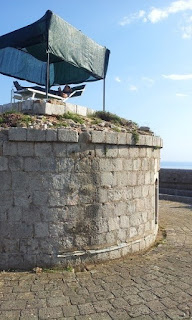 We also popped over to the nearby island of Lokrum, a short ferry ride away. They regularly leave from the harbour. There are the ruins of a monastery there, along with Napoleonic era fort: note that is a bit of an uphill walk. It was virtually deserted when we arrived, adding to the atmosphere. You get a fine view from the top as well, kept company by a cannon, still complete with a track, enabling it to be easily moved for firing at various vantage points. There was a guard (I assume?) chilling out on a deckchair, as I guess he liked the view too.

Croatia has everything you could want in a destination, as not only was there lots of history for me, there were also beaches for my friend. We took a sea kayaking trip from Banje Beach, one of the more popular spots, also spending some time on St Joseph's Beach. The food in Dubrovnik was lovely too, with a strong Italian influence. Again I was reminded a little of Malta, though Croatia couldn't compete with those delicious pastizzi.

Dubrovnik's building are in demand, so be aware that sometimes you won't be able to go in due to private parties. We weren't able to visit Fort Lawrence (again, lots more in the book ;D) on our first attempt because of a rich New Yorker (I think?) hiring it out for their daughter's birthday. Something similar happened when we tried to go into the Sponza Palace, where there was a wedding: it seems to be an annoyingly frequent occurrence in Dubrovnik. I'm not sure if you can check that in advance, but if there is some kind of calendar available, it would be well worth examining before you head off.

Along with the history of centuries past, Dubrovnik has numerous poignant reminders of the far more recent siege during the Balkan Wars. That conflict, which still has repercussions today (in Serbian politics, for example), is commemorated in museums, but I found the most interesting and touching memorial was on a shop front. The owner had put up photos and text talking about his experience during the siege, especially what he lost.

There are lots of attractive islands off the coast of Croatia in the Adriatic, which was the main reason my friend wanted to go to the country in the first place. To visit Korcula, the sixth largest, you can take the 1A or 1B bus to the central Dubrovnik station (in the sprawling new town). Be prepared for an unruly scrum to get onto the bus, as there is no concept of queuing. From the bus station you can head onwards to Korcula. There is no number on the bus, but it does have a bit of paper at the front that says Korcula, at stop number two (it's the Dubrovnik-Split bus).You'll have to put luggage underneath, costing you HRK8. The bus will take around three hours to get to the ferry station, where it boards a ferry and discharges you after that.

Once we got to Korcula there was a lot of island hopping and outdoor activities, like bike hire. Or at least there was for my friend. I spent most of that section of the holiday in bed. I'm not sure what triggered it, but I made friends with the toilet right before I got off the ferry and my stomach didn't settle for several days. On the plus side, I did finally get to read all the original Dune books by Frank Herbert, something I've been meaning to do for at least twenty years. I though the first book was good, the second and third were rather bogged down in pretentious waffle, but then it really picked up with the last three volumes. Each one was better than the last, in my opinion, reaching a high point with the sixth: it even delved into cyberpunk territory, much to my pleasure. 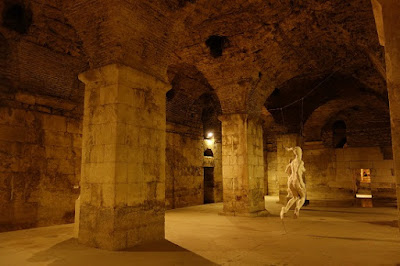 Split is a very different prospect to Dubrovnik. In some senses the history is even more impressive, as this dates back to the Roman Emperor Diocletian. Yet it is an unusually living history, because Diocletian's Palace has for most of its existence been a part of daily life in Split. Houses, shops and streets have therefore all grown up around and through the ancient buildings, absorbed by the structure of the city. If you're looking for authenticity, then your best bet is probably to wander down into the basement, the most atmospheric part of the Palace. The middle has been taken over by market stalls (it reminded me strongly of the Kapalı Çarşı in Istanbul, a regular part of my family holidays back to the fatherland), but the rooms to either side have managed to avoid encroachment by the modern city. A range of sculptures were dotted throughout when I was there, which were interesting in themselves, but other than that the rooms were left bare.

My favourite part of our time in Split was a day trip out to a nearby castle, Klis. I talk about that a lot more in the book, but it's easy to get to on a local bus (we took the 22, which dropped us right outside). I especially liked the armoury, though I'm not sure if that is a temporary exhibit or not. There were lots of swords on display, with a guy on hand to tell you more about the history, with a chance to swing some (replica) swords too.
slideyfoot at 11:10
Share