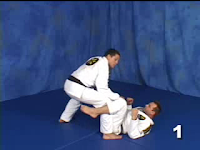 Dónal started off with a simplified knee cut, stepping between their legs, then driving your shin across diagonally, keeping your elbow in tight and hips close to theirs. The most common problem with that is you leave too much space, whereupon they manage to slip a knee in front of you. Knee shield can be a real pain to pass.

From a failed knee cut, the leg squash comes in handy. Grab the knee of the leg you're trying to slide across (Dónal prefers to cup under the knee, but you can also grab the trouser material: the problem is that may move and give them room to adjust enough to establish spider guard or something like that). Lift and move it across to the opposite side. To do that effectively, you'll need to turn your non-knee sliding foot so that the toes are pointing in the direction you want to move. Bend the knee and shift in that direction. Also, don't use your arm at the end, or you'll end up lying on it. Instead, as you move them across, rely more on your chest to move them over, meaning your arm is free to hook around the hip and block their shrimp.

As you slide across, you're going to break what is normally a cardinal rule of BJJ: putting your hands on the mat. This is for base, with one by their same side armpit, while your remaining hand posts on the other side. The intention is to end up sprawled on top of their legs. More specifically, your groin is by the back of their knees, ideally with the point of your hip pressing into the middle of their thigh. Although it feels counter-intuitive, don't go up on your toes. Sink your weight through your hips into their legs, with your own legs draped on either side.

Almost certainly they are going to move, especially if you're being mean and digging the point of your hip into the 'dead leg' point of their thigh. Once they do, backstep and pass around the other side. This feeds smoothly into mount, pulling their knees towards you and wrapping your leg behind their knees. If you like, you can also lock your legs as you wrap them, making the transition to mount particularly secure.

If you can't get that, there is the hip slide pass against knee shield (no idea if it has a name, as I just made that up). You have a grip on their collar. Put your elbow by their hip, using it as a means of driving your weight through them, as opposed to being a white belt and trying to dig into them with the elbow. Lean through and slide over their knee with your hip until you can slip through. To finish , shove their legs back with your hips, secure side control.

In specific sparring from open guard, I worked more on the knee cut rather than the bullfighter from last week, seeing as we'd just been practicing the knee cut. Fellow RGA Bucks purple belt Gareth was visiting, which was very cool. That also meant I had a higher calibre of training partner than normal, immediately demonstrated when unlike everybody else, he went to deep half. I tried holding that off by underhooking his arm to stop him from turning and rolling me over, then attempted to get into a position where I could exert some pressure, controlling the arm (again, to stop his turn). I need to review my deep half passes, as I only remember that first part about underhooking the arm: this is why it's useful to have purple belts there, they can put in stuff like that. ;)

I think I sort of passed at one point but then got reversed. I may be mixing together a few rolls though. With the next guy, I clamped his shin to his leg by wrapping it up, then simply swinging to other leg back to pass, but that wouldn't normally work. I'm sure once he's seen that a few times, that passing route will be gone. Underneath, I wanted to go into the cross-grip guard to practice the techniques I'm teaching this week, along as the ankle pick I taught yesterday. I couldn't get into position, or they put up the other knee. Thinking back, that should really be a good set-up for a scissor sweep: I tried it once, but sloppily and I don't think I pulled them into me enough with the collar grip to control their weight. I'll have another look at the version Kid Peligro shows in his book, supposedly a variation he learned from Rickson.

I hit the tripod at one point, but generally I'm not making a smooth enough transition to the sickle when that doesn't work. It's too telegraphed and too clunky, so more drilling required on that. While generally this week I felt that I've been better at conserving my energy in closed guard, I did have a roll where I fell into that enervating pattern of clamping down in closed guard. I eventually got the sit-up sweep, but that method of closed guard (grabbing them and pretty much trying to hold them down with an arm or two) is terrible for me. I don't have the strength, and even if I did, I'd burn out quickly. So, deep collar grip more often, timing, better sensitivity to their body movement.

Class finished up with a purple belt spar. I was looking to block the pass, where normally I could get back to half guard at worst. I sort of got the toe grab sweep, but I made a silly error of grabbing the toes after reaching under his legs, rather than over the butt and around the legs. Although I was able to come up and drive through, due to my poor grip, I got reversed straight away.

Loads of teaching for the next few months, as it will be just me teaching every class until 16th August (apart from this Thursday). Most exciting is that the women's class begins tomorrow! Yay! :D
slideyfoot at 21:15
Share